Postmaster Says Ballots No. 1 Priority, but Details No Plan 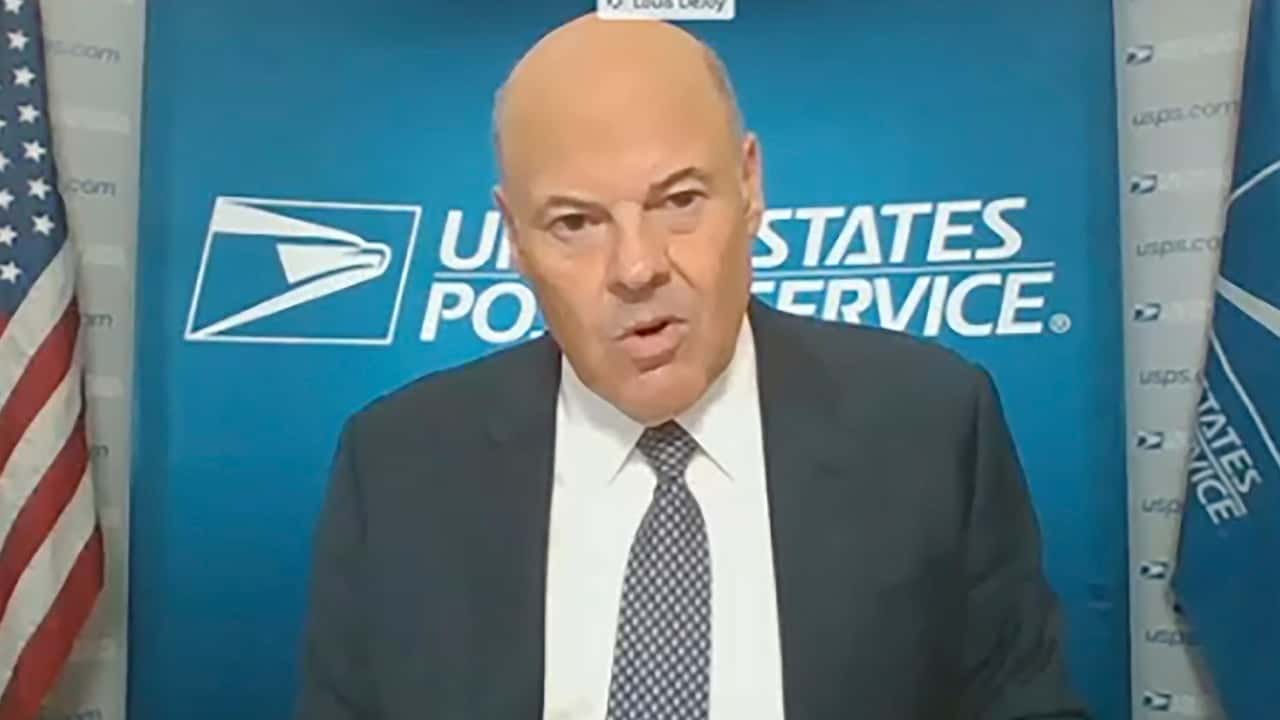 WASHINGTON — Postmaster General Louis DeJoy, pressed by senators over mail delivery disruptions, said Friday he was unaware of changes that sparked a public uproar, but his responses raised fresh questions about how the Postal Service will ensure timely delivery of ballots for the November election.

DeJoy told senators he has zero plans to restore blue mailboxes and sorting equipment that have been removed, saying they are “not needed.” He did say that election mail would continue to be prioritized for delivery as in years past.

DeJoy told senators he has zero plans to restore blue mailboxes and sorting equipment that have been removed, saying they are “not needed.” He did say that election mail would continue to be prioritized for delivery as in years past.

But while DeJoy distanced himself from President Donald Trump’s complaints about mail-in ballots that are expected to surge in the coronavirus pandemic, he told senators could not yet provide a detailed plan about how he will ensure on-time election mail delivery.

DeJoy promised the Postal Service “is fully capable and committed to delivering the nation’s election mail securely and on-time.” He said that was his “No. 1 priority between now and Election Day.”

“I think the American people should be able to vote by mail,” DeJoy testified.

The new postmaster general, a Trump donor and ally who took the job in June, has faced a public outcry over changes and delivery delays. Democrats warn his cost-cutting initiatives are causing an upheaval that threatens the election.

They peppered him with questions about the Trump administration’s push to starve the Postal Service of funds to process ballots for November. Trump had said he wants to block agency funds to make it harder for the Postal Service to handle the expected surge of mail-in ballots during the COVID-19 crisis.

DeJoy flatly told senators he has had few conversations with White House officials.

FILE – In this Aug. 5, 2020, file photo Postmaster General Louis DeJoy, left, is escorted to House Speaker Nancy Pelosi’s office on Capitol Hill in Washington. The U.S. Postal Service has sent letters to 46 states and the District of Columbia, warning it cannot guarantee all ballots cast by mail for the November election will arrive in time to be counted, The Washington Post reported Friday, Aug. 14. DeJoy, a former supply-chain CEO and a major donor to President Donald Trump and other Republicans, has pushed cost-cutting measures to eliminate overtime pay and hold mail until the next day if postal distribution centers are running late. (AP Photo/Carolyn Kaster, File)

DeJoy Acknowledged He Did No Studies of How the Changes He Was Making Would Impact Seniors, Veterans and Working Families

He said he had “no idea” equipment was being removed until the public outcry. Democrats asked DeJoy to explain the rationale behind the changes and pressed him on how, exactly, he would ensure election mail and ballots would arrive on time.

“Do you have a more detailed plan?” demanded Sen. Maggie Hassan, D-N.H., asking for it by Sunday.

“I don’t think we’ll have a complete plan by Sunday night,” DeJoy replied, acknowledging it was just being formed.

Grilled by Sen. Jacky Rosen, D-Nev., DeJoy acknowledged he did no studies of how the changes he was making would impact seniors, veterans and working families.

“Is there any analysis?” she demanded.

He said his analysis showed delivery would be improved.

The top Democrat on the panel, Sen. Gary Peters of Michigan, said DeJoy owed the nation an “apology” for the widespread mail disruptions since he took over the service.

“So this isn’t some devious plot on your part,” Johnson said.

The hearing was held remotely as Congress is on recess and lawmakers have been conducting much of their business during the coronavirus outbreak in virtual settings.

With mounting pressure, DeJoy abruptly reversed course this week, vowing to postpone any further changes until after the election, saying he wanted to avoid even the “perception” of any interference. Blue mailboxes were being removed, back-of-shop sorting equipment shutdown and overtime hours kept in check.

The outcry over mail delays and warnings of political interference have put the Postal Service at the center of the nation’s tumultuous election year, with Americans rallying around one of the nation’s oldest and more popular institutions.

With mounting pressure, DeJoy abruptly reversed course this week, vowing to postpone any further changes until after the election, saying he wanted to avoid even the “perception” of any interference. Blue mailboxes were being removed, back-of-shop sorting equipment shutdown and overtime hours kept in check.

House Democrats are pushing ahead with a rare Saturday session to pass legislation that would prohibit the actions and send $25 billion to shore up postal operations. Some 20 states, along with voting rights advocates, have sued to reverse the changes.

Senate Majority Leader Mitch McConnell is eyeing a $10 billion postal rescue as part of the next COVID-19 relief package. The White House has said it would be open to more postal funding as part of a broader virus aid package.

The Postal Service Said DeJoy Has Made All Required Financial Disclosures

The Postal Service is struggling financially under a decline in mail volume, rising costs from the coronavirus pandemic and a rare and some say cumbersome congressional requirement to fund in advance its retiree health care benefits.

For many, the Postal Service provides a lifeline, sending not just cards and letters, but delivering prescription drugs, financial statements and other items that are especially needed by mail during the pandemic.

The postal service board of governors, appointed by Trump, selected DeJoy in May to take the job. A GOP donor, he previously owned a logistics business that was a longtime Postal Service contractor. He maintains significant financial stakes in companies that do business or compete with the agency, raising conflict of interest questions.

In a statement, the Postal Service said DeJoy has made all required financial disclosures but that he might have to divest some holdings if conflicts arise.

Treasury Secretary Steven Mnuchin, whose role in postal operations is being questioned by Senate Democrats, said in a letter to Senate Democratic leader Chuck Schumer that he had no hand in “recruiting or suggesting” DeJoy for the job.

“In fact, I was surprised to learn that Mr. DeJoy was a candidate for the position,” Mnuchin wrote in a letter late Thursday to Schumer.

David C. Williams, the former vice chairman of the U.S. Postal Service Board of Governors, on Thursday told lawmakers that he resigned from the board, in part, over DeJoy’s selection, and because he believed the White House was taking extraordinary steps to turn the independent agency into a “political tool.”

Louis-Dreyfus ‘Proud to Be a Nasty, Nasty Woman’ for Dems