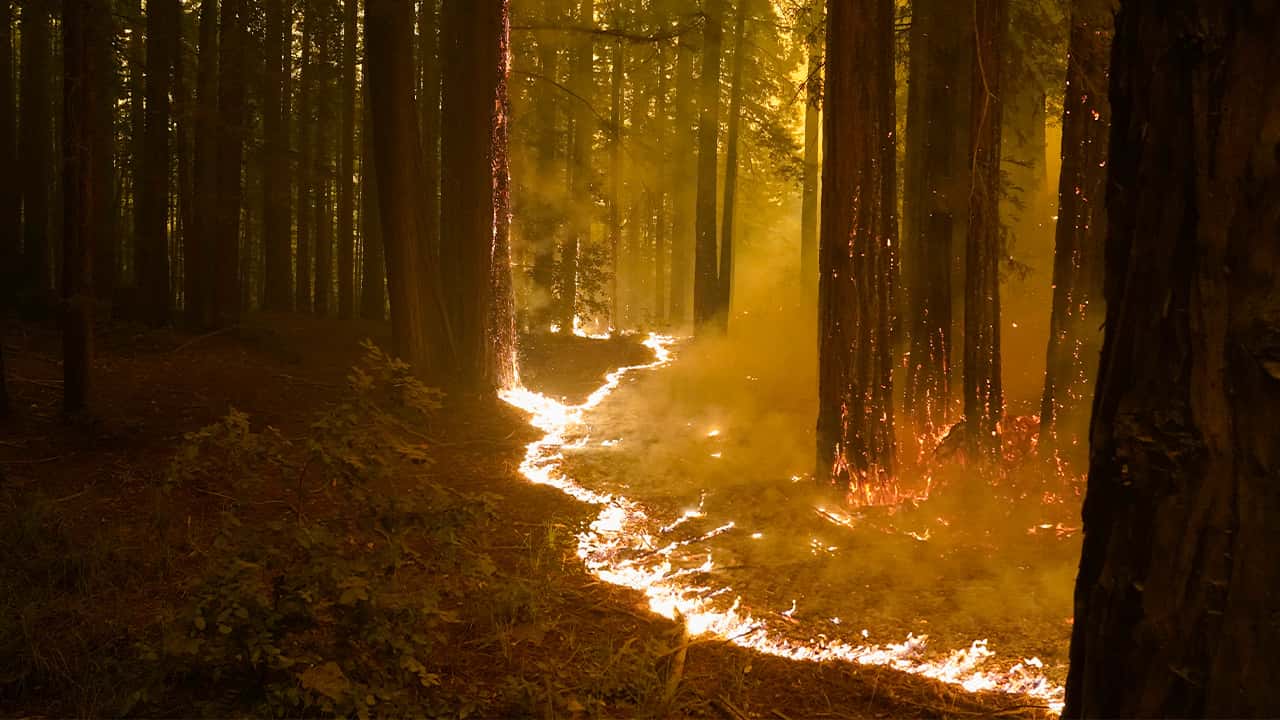 SANTA CRUZ — Sky-darkening wildfires that took at least six lives and forced tens of thousands of people from their homes blazed throughout California on Friday as firefighting resources strained under the vastness of the infernos authorities were trying to control.

Three major complexes encompassing dozens of fires chewed through a combined 780 square miles of forests, canyons, and rural areas north, east, and south of San Francisco Bay. Thousands of acres were ablaze elsewhere in the state.

Three major complexes encompassing dozens of fires chewed through a combined 780 square miles of forests, canyons, and rural areas north, east, and south of San Francisco Bay. Thousands of acres were ablaze elsewhere in the state.

Tens of thousands of homes were threatened by flames that drove through dense and bone-dry trees and brush. Many of the fires were sparked by lightning strikes from brief thunderstorms this week as a high-pressure area over the West brought a dangerous mix of triple-digit weather and monsoonal moisture pulled from the south.

Some fires doubled in size within 24 hours, fire officials said.

And while some evacuations were lifted in the small city of Vacaville, between San Francisco and Sacramento, other areas expanded their evacuation areas. The University of California, Santa Cruz, was evacuated and a new fire burning near Yosemite National Park also prompted evacuations.

Santa Cruz itself, a coastal city of 65,000, wasn’t affected but Mayor Justin Cummings urged residents Thursday evening to be prepared to evacuate by gassing up their vehicles and packing important documents, medicines, and other belongings.

“Prepare early so that you are ready to go at a moment’s notice,” Cummings said.

Although temperatures were predicted to ease slightly on Friday, they were also expected to be hot enough so that firefighters will not be able to count on cool evening weather aiding them. Erratic winds also could drive the fires unpredictably in multiple directions, state fire officials said.

“There’s so much heat in these fires that they create their own wind … and they may blow in any direction, and very erratically,” said Daniel Berlant, an assistant deputy director with the state Department of Forestry and Fire Protection, known as Cal Fire.

“This country likes to burn at night, more so than during the day, and that’s because of the wind patterns,” he said.

More than 64,000 people were ordered evacuated in those counties.

The ferocity of the fires was astonishing so early in the fire season, which historically has seen the largest and deadliest blazes when gusty, dry winds blow in the fall.

But the death toll already had reached at least five since the majority of blazes started less than a week ago.

Berlant said three civilians died in Napa County and one died in neighboring Solano County since the fires began. He didn’t have details but Solano County Sheriff Thomas A. Ferrara reported the death of a male resident there.

It wasn’t immediately clear whether the fatalities included a Pacific Gas & Electric utility worker who was found dead Wednesday in a vehicle in the Vacaville area.

Also, in central California, a pilot on a water-dropping mission in western Fresno County died Wednesday morning when his helicopter crashed.

At Least 175 Buildings Destroyed and Tens of Thousands Threatened

At least two other people were missing and more than 30 civilians and firefighters have been injured, authorities said.

Tim and Anne Roberts had gone to the beach with their two children on Monday to avoid the smoke at their home in Boulder Creek in Santa Cruz County. They packed a change of clothes, their children’s school supplies, and their passports — just in case.

Smoke and ash billowing from the fires also fouled the air throughout California’s scenic central coast and in San Francisco.

The fires have destroyed at least 175 buildings, including homes, and threatened tens of thousands more.

Tim and Anne Roberts had gone to the beach with their two children on Monday to avoid the smoke at their home in Boulder Creek in Santa Cruz County. They packed a change of clothes, their children’s school supplies and their passports — just in case.

They learned Wednesday that their house had burned. Birth certificates, legal documents, and family heirlooms are gone. But in photos of the ruins, they were surprised by how many redwoods, oaks and fruit trees were still standing.

The good news for Brookdale resident Larissa Eisenstein Thursday afternoon was that her five chickens, Kelly and The Nuggets, had been safely relocated into a stranger’s yard in a safer, neighboring community.

The chicken evacuation came a day after Eisenstein, a Silicon Valley tech worker, had been forced to leave them behind during an overnight evacuation. She fled with her cats Mochi and Mini, driving from one hotel to the next only to find they were full before landing in a safe place where they could get some rest.

Some 3,000 Firefighters Had Arrived in the Past 24 Hours

The bad news Thursday was that the fire was burning down her wooded street as she adjusted to the idea that her worldly possessions may now be limited to photos of her parents, some jewelry she had grabbed, and fresh tomatoes from her garden.

“After I got the cats, I realized there was very little important to me, and the priority is to try to remember how lovely things can be,” she said. “I’ve had a wonderful garden this year.”

More than 10,000 firefighters were on the front lines. Some 3,000 firefighters had arrived in the past 24 hours, along with hundreds of fire engines from neighboring states, and National Guard troops that were staffing hand crews and flying helicopters, Berlant said.

Some C-130 military aircraft also had been outfitted as air tankers, Berlant said.

More firefighters were sent to battle the complex of fires in Santa Cruz and San Mateo counties but “it’s still not enough,” See said.

“We’re still drastically short for a fire of this size,” he said.

Cal Fire spokesman Dan Olson said there are concerns that some people are trying to organize through social media to create volunteer brigades and fight the fire themselves.

“The dangers out there to their own lives outweigh anything they can accomplish,” he said. “They’re putting their lives in jeopardy.”

In a last-minute video recorded for the Democratic National Convention, Gov. Gavin Newsom said “if you are in denial about climate change, come to California.”