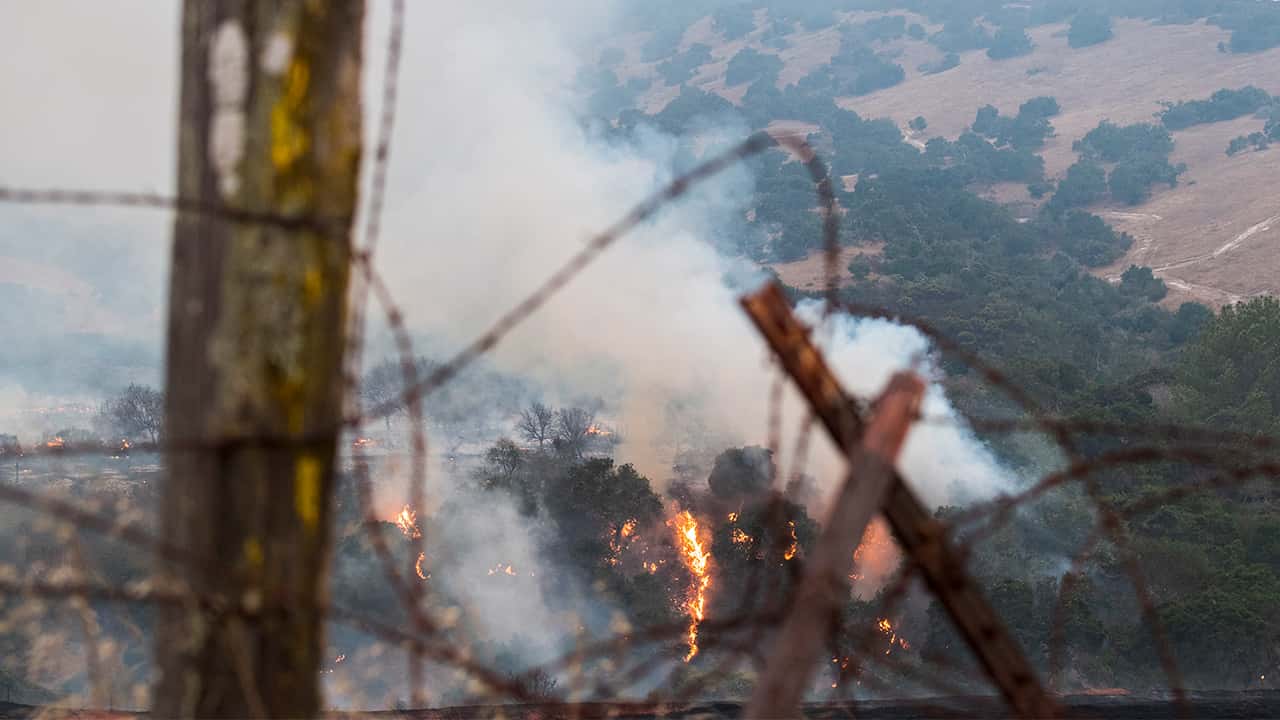 VACAVILLE — Wildfires raged through Northern California on Thursday, threatening thousands of homes and blackening the skies near San Francisco as crews struggled to surround them despite steep terrain and blistering heat.

In central California, a pilot on a water dropping mission in western Fresno County died Wednesday morning when his helicopter crashed about an hour from New Coalinga Municipal Airport.

The fires, many caused by lightning and sometimes pushed by strong winds, had burned hundreds of thousands of acres as they chewed through brushland, rural areas, canyon country and dense forest to the north, east and south of San Francisco. Fires also carved their way through the wine country and the Sierra Nevada.

In addition to about two dozen major blazes, small fires kept erupting, though most were quickly stopped.

In central California, a pilot on a water dropping mission in western Fresno County died Wednesday morning when his helicopter crashed about an hour from New Coalinga Municipal Airport.

The pilot, whose name has not been released, was working with Guardian Helicopters, based in Fillmore, which had a contract with the state fire agency to provide emergency services on a call-when-needed basis, said Zoe Keliher, an investigator with the National Transportation Safety Board.

A Pacific Gas & Electric utility worker died while assisting first responders at a fire in the Vacaville area between San Francisco and Sacramento but circumstances were not clear. The utility confirmed the death but gave no details, KPIX-TV reported.

The worker was found in a vehicle and CPR was performed but he was pronounced dead at a hospital, said a California Department of Forestry and Fire Protection statement.

Hundreds of fires have erupted since the start of the week as a heat wave accompanied by humid air created a dangerous mix of triple-digit temperatures and thunderstorms that flashed lightning. Two fires in Solano County prompted evacuation orders for 8,000 residents near the Russian River Wednesday and residents of Healdsburg, which has a population of about 12,000, were warned late Wednesday night to be ready to flee.

Ash and smoke filled the air in San Francisco from at least seven fires — known as the LNU Lightning Complex — that had burned more than 100 buildings, including some homes, and threatened 25,000 others in Napa, Sonoma, Lake, Yolo and Solano counties.

Four people had been injured, Cal Fire reported, but didn’t supply details except to say they weren’t firefighters.

Residents in nearby Vacaville, a city of about 100,000, were roused before dawn Wednesday by orders to flee.

Police and firefighters went door-to-door in a frantic scramble to warn residents to evacuate as flames encroached.

“The whole sky was red orange and it was coming over the hill there and it was massive. I’ve never seen anything like it and it only took a few minutes to get here,” she said.

The family fled with some animals but had to leave two beloved horses. They returned Wednesday to find the house and barn destroyed, but Hansen was thrilled to see that her horses had survived.

“I’m not upset about the house. I’m just happy that my horses and animals are alive and my daughter,” she said.

John Gardiner, 60, stayed up all night after receiving an alert from a neighbor of oncoming fire just before midnight Wednesday.

“It was incredible — things swirling, winds just whipping through like a howling, ripping sound and then you could hear explosions going off,” he said. “You can taste smoke in your mouth.”

His house survived — for the moment.

Five to seven people were injured in one of the fires in Stanislaus County, Sheriff Jeff Dirkse told the Sacramento Bee.

One had major burn injuries and all were taken by ambulance for treatment, he said. Someone evacuating on Monday had reported that workers at an illegal marijuana farm were still at the ranch but he couldn’t confirm if any were among the patients.

In addition, Cal Fire said two “first responders” to the fires had been injured but didn’t release details.

Fire crews were hampered by dense, dry brush in steep country, by smoke and haze that trapped heat, and by winds that at times gusted to 30 mph, Cal Fire reported. They spent Wednesday struggling to prevent flames from reaching buildings.

To the south of San Francisco in San Mateo and Santa Cruz counties, about 22,000 people were ordered to evacuate because of a fire burning in dense wooded parkland that threatened communities, Cal Fire spokesman Jonathan Cox said.

Resources were strapped, he said, given the number of fires burning in California.

Some firefighters were working 72-hour shifts instead of the usual 24 hours.

“We’re in the unfortunate position where firefighters are going to be spending several days out on the fire line,” Cox said. “It’s grueling, it’s exhausting.”

In Southern California, an 8-day-old blaze near Lake Hughes in northern Los Angeles County mountains continued to be a threat to 4,570 structures after destroying 21 buildings. It was 38% contained.

Democrats Pound Their Message: To Oust Trump, You Must Vote