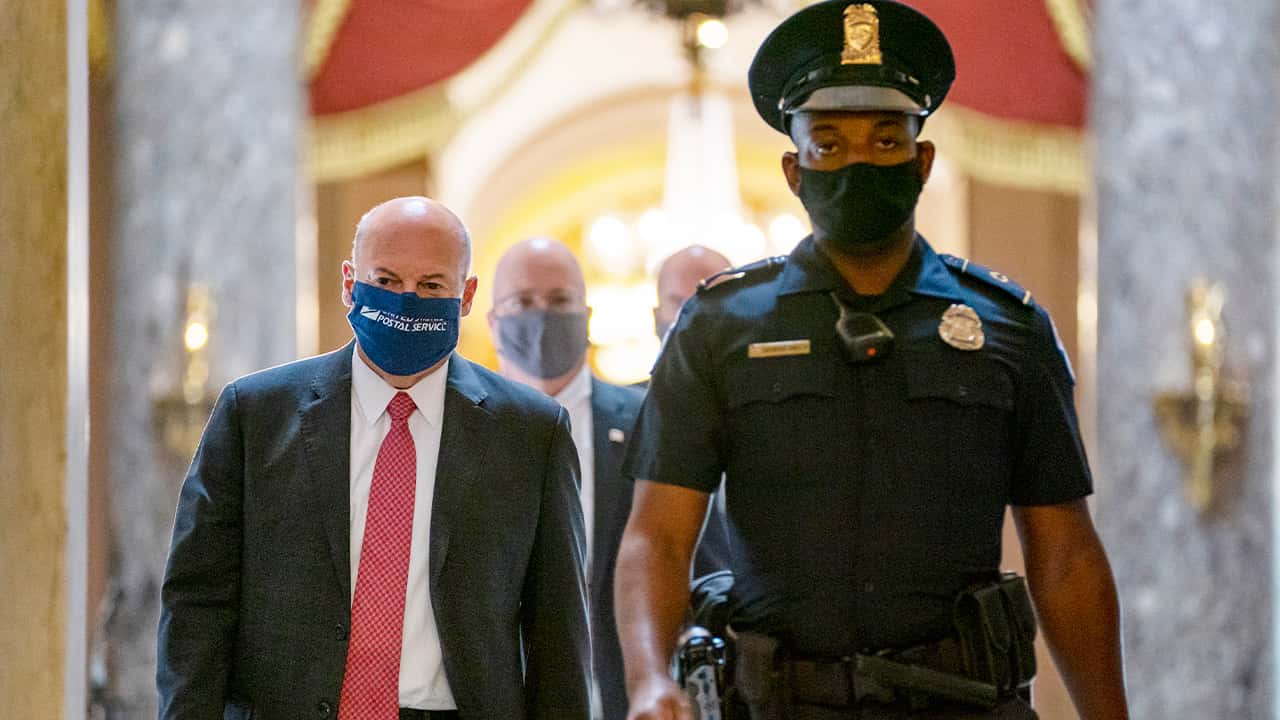 WASHINGTON — Backlash mounting, President Donald Trump’s embattled Postmaster General Louis DeJoy will appear Friday before the Senate to testify on mail delivery delays and service changes that lawmakers and others are warning could imperil the November election.

The crisis at the Postal Service has erupted as a major election year issue as DeJoy, a Trump ally who took control of the agency in June, has swiftly engineered cuts and operational changes that are disrupting mail delivery operations and raising alarms among workers.

Trump has flatly denied he was asking for a slow-walk of the mail. But his newly-installed postmaster, a Republican donor with no previous postal management, is facing pressure by Democrats to halt any changes as millions of Americans prepare to vote by mail during the COVID-19 crisis. Demonstrations are being held Tuesday in several cities.

In the pivotal swing state of Ohio, Attorney General Dave Yost pleaded with Trump to postpone any needed changes to the Postal Service until after Election Day. GOP Sen. Rob Portman and other Republicans in Ohio’s congressional delegation urged DeJoy to “ensure timely and accurate delivery of election-related materials.”

The crisis at the Postal Service has erupted as a major election year issue as DeJoy, a Trump ally who took control of the agency in June, has swiftly engineered cuts and operational changes that are disrupting mail delivery operations and raising alarms among workers.

At the White House, Trump leveled fresh assaults Tuesday on mail-in voting and universal ballots. More Americans than ever are expected to choose to vote absentee this year instead of risking health concerns by voting at polling places during the coronavirus outbreak.

“You can’t have millions and millions of ballots sent all over the place, sent to people that are dead, sent to dogs, cats, sent everywhere,” Trump told reporters.

“This isn’t games and you have to get it right,” Trump said.

Trump made clear last week that he was blocking $25 billion emergency aid to the Postal Service, acknowledging he wanted to curtail election mail operations, as well as a Democratic proposal to provide $3.6 billion in additional election money to the states to help process an expected surge of mail-in ballots. FILE – In this March 31, 2020, file photo United States Post Office delivery trucks are reflected in the side mirror of a vehicle as postal delivers set off on their daily rounds in Arvada, Colo. The U.S. Postal Service is warning states that it cannot guarantee all ballots cast by mail for the November election will arrive in time to be counted, even if mailed by state deadlines. (AP Photo/David Zalubowski, File)

Congress is not in session but Speaker Nancy Pelosi is calling the House back to Washington over the crisis at the Postal Service, setting up a political showdown amid growing concerns that the Trump White House is trying to undermine the agency ahead of the election.

The House is expected to vote Saturday on legislation that would prohibit changes at the agency. The package will also include $25 billion to shore up the Postal Service, which faces continued financial losses.

DeJoy and the head of the Postal Service board of governors are also set to testify Monday in the House.

“We have to save the Post Office from the President now,” Pelosi said late Monday on MSNBC.

“We must ensure they can continue to count on dependable and timely delivery,” said Peters.

The Postal Service is among the nation’s oldest and more popular institutions, strained in recent years by declines first-class and business mail, but now hit with new challenges during the coronavirus pandemic. Trump routinely criticizes its business model, but the financial outlook is far more complex, and includes an unusual requirement to pre-fund retiree health benefits that advocates in Congress want to undo.

Ahead of the election, DeJoy, a former supply-chain CEO who took over the Postal Service in June, has sparked nationwide outcry over delays, new prices and cutbacks just as millions of Americans will be trying to vote by mail and polling places during the COVID-19 crisis.

Trump has defended DeJoy, but also criticized postal operations and claimed that universal mail-in ballots would be “a disaster.”

Experts say examples of ballot fraud have been overstated. The Brennan Center for Justice in 2017 ranked the risk of ballot fraud at 0.00004% to 0.0009%, based on studies of past elections.

Senate Majority Leader Mitch McConnell, who sent senators home for a summer recess, distanced himself Monday from Trump’s complaints about mail operations. But the Republican leader also declined to recall senators to Washington, vowing the Postal Service “is going to be just fine.”

Senate Democratic leader Chuck Schumer and other Democrats, meanwhile, urged the postal board to use authority under a 1970 law to reverse operational changes put in place last month by DeJoy. If he declines to cooperate, “you have the authority, under the Postal Reorganization Act, to remove the postmaster general,” the senators said in a letter to board members.

The legislation set for Saturday’s vote, the “Delivering for America Act,” would prohibit the Postal Service from implementing any changes to operations or level of service it had in place on Jan. 1. The package would include the $25 billion approved as part of the COVID-19 rescue that is stalled in the Senate.

The Postal Service said it has stopped removing mailboxes and mail-sorting machines following complaints from lawmakers and customers. It said it would stop removing its distinctive blue mailboxes through mid-November.

The legislation set for Saturday’s vote, the “Delivering for America Act,” would prohibit the Postal Service from implementing any changes to operations or level of service it had in place on Jan. 1. The package would include the $25 billion approved as part of the COVID-19 rescue that is stalled in the Senate.

New Policies Eliminated Overtime and Reduced Use of Sorting Equipment

DeJoy, the first postmaster general in nearly two decades who was not a career postal employee, has pledged to modernize the money-losing agency to make it more efficient. He eliminated most overtime for postal workers, imposed restrictions on transportation and reduced of the quantity and use of mail-processing equipment.

Postal workers are increasingly worried about their ability to deliver for the fall election.

In a letter to postal staffers last week obtained by The Associated Press, DeJoy said his policies have brought “unintended consequences that impacted our overall service levels,” but added that the Postal Service “must make a number of significant changes which will not be easy, but which are necessary.”

Nate Castro, a postal staffer and union shop steward in Florida with more than three decades of experience, said the rationale behind DeJoy’s policy changes has been unclear.

“He’s on express mode where he’s not even taking the advice of people that are experienced for years,” said Castro.