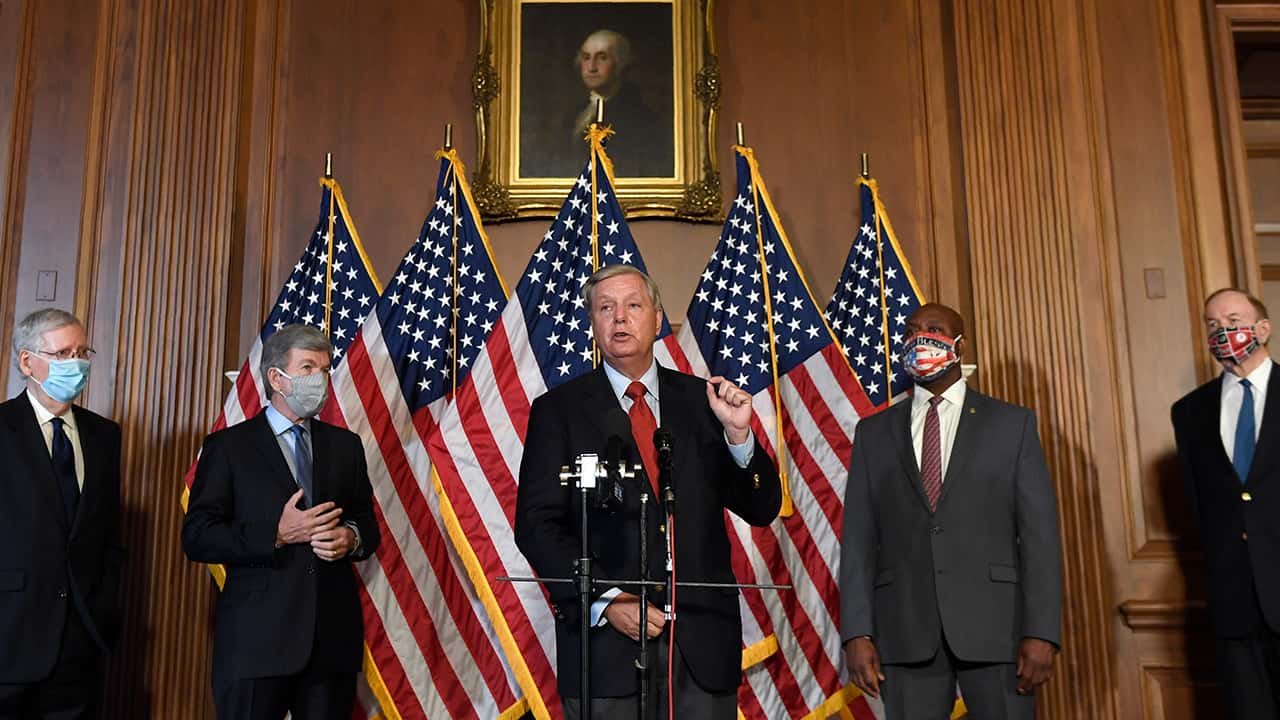 WASHINGTON — A new $1 trillion COVID-19 response package by Senate Republicans is supposed to give the government more weapons to battle the surging coronavirus pandemic. But GOP lawmakers have more than just the “invisible enemy” in mind.

The Administration Never Officially Asked for the Defense Funding

The weapons bazaar galled Democrats whose votes will be required to pass the bill amid widespread divisions inside the Senate GOP conference on the measure. They are pressing items such as food aid and funding for mail-in voting.
“We are not going to be supporting anything that does not acknowledge the incredible hardship people are facing on food,” said Sen. Debbie Stabenow, D-Mich.
“Did you see the states it goes to? Maine. Arizona. Kentucky — we have a list,” said Senate Minority Leader Chuck Schumer, D-N.Y., naming states where Republicans are defending seats in the fall election.
The administration never officially asked for the defense funding. It instead delivered informal requests to the powerful lawmakers like Shelby who sit atop the defense funding panel, aides say. Even those informal requests left out the $8 billion for items like planes, ships and missile defense systems, though the White House grew to embrace some of the items.
The weapons package grew to include $1.1 billion to build Boeing Poseidon surveillance jets, manufactured in Washington and Kansas, with $283 million more for the company’s Army Apache helicopters, which are made in Mesa, Arizona.
Endangered GOP Sen. Martha McSally of Arizona has been pressing a $650 million project to replace the wings of A-10 Thunderbolt ground support aircraft, many of which are based at Davis-Monthan Air Force Base in Tucson. There’s $49 million for Navy sonobuoys, listening devices that can detect submarines that are likely to be manufactured in Florida, according to an analysis by Democratic staff aides requiring anonymity to share internal working documents.
“The defense industrial base — a lot of it’s been eroded right now. A lot of people are off from work,” Shelby said. “We’ve got a lot of suppliers involved in there.” A Shelby spokesperson added that the country’s defense industrial base is “essential to our economy and to the defense of our nation” and said the bill would support millions of jobs.

The Package Includes $1.8 Billion to Rebuild the FBI’s Headquarters in Downtown Washington

But further justification for the huge weapons procurement package — drawn in part from a Pentagon “unfunded priorities” wish list of items excluded from the official $740 billion or so defense budget — has been lacking. The measure doesn’t say in many cases whether the money is going to buy additional aircraft and other weapons or provide additional money for existing contracts.