No Virus Bill Yet: White House, GOP at Odds Over Jobless Aid 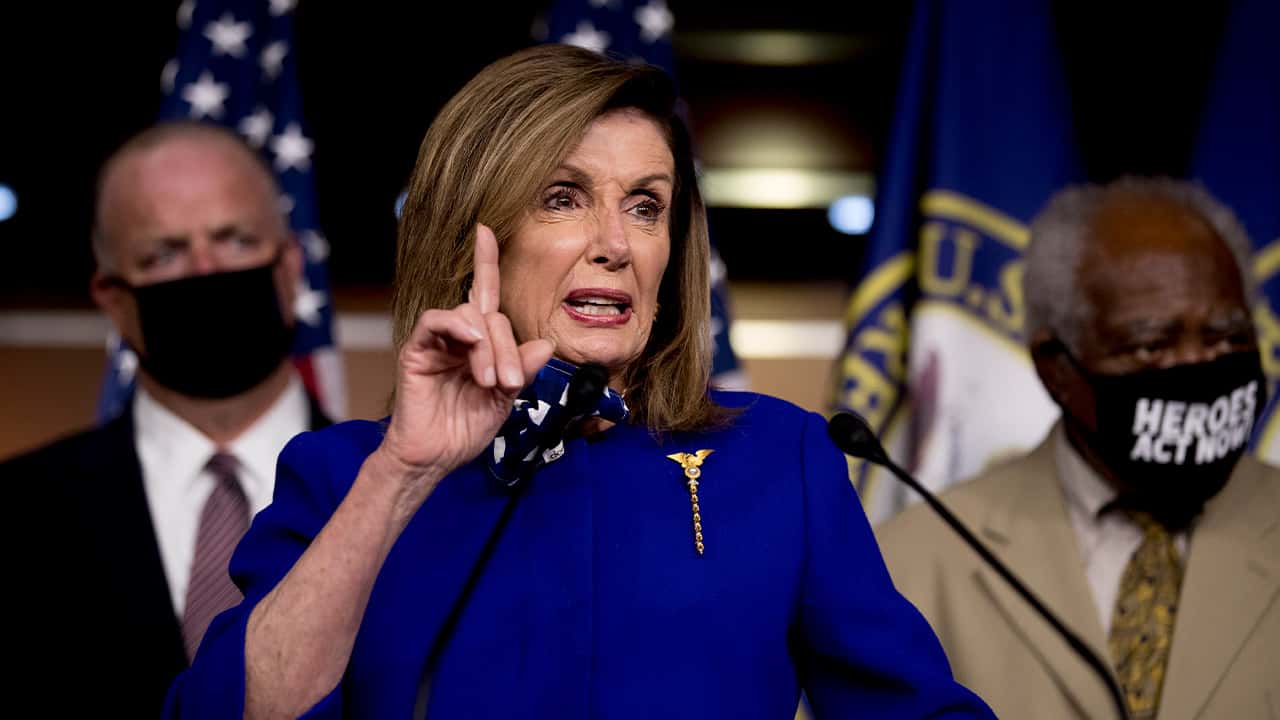 WASHINGTON — Negotiations over a new COVID-19 rescue bill were in flux Friday after the White House floated cutting an unemployment benefits boost to as little as $100 and President Donald Trump turned to a new priority, adding money to build a new FBI headquarters.
Senate Majority Leader Mitch McConnell sent senators home, promising a Republican proposal would be ready on Monday. Outraged Democrats warned that time was being wasted on GOP infighting as the virus worsens, jobless aid expires and the death toll rises.
“We call upon Leader McConnell to get serious,” said House Speaker Nancy Pelosi and Senate Democratic leader Chuck Schumer in a statement.
During a head-spinning week of start-and-stop efforts, McConnell abruptly halted the rollout of the Republicans’ $1 trillion plan, which was supposed to provide a counter-offer to the Democrats’ $3 trillion bill in an opening bid for negotiations. Trump was forced to abandon his push for a payroll tax break, which his party opposed, and the White House turned to new priorities.
As Republicans struggled, the nation’s infections topped 4 million, deaths rose by several thousand, to nearly 145,000, and the $600 unemployment benefit boost for millions of out-of-work Americans was on track to expire.
As McConnell shut down the Senate, he promised to return with “a strong, targeted piece of legislation aimed directly at the challenges we face right now.”
The GOP leader, who is up for reelection in November alongside Trump, dashed home to Kentucky for an event with the nation’s drug czar, Jim Carroll, in a part of Appalachia confronting opioid addiction and skyrocketing overdose deaths.
As for the COVID-19 crisis, McConnell said in Ashland, Kentucky, “This has been one heck of a challenge for everybody in the country. Hopefully we can come together behind some package we can agree on in the next few weeks.”

Republicans Largely Believe the Unemployment Add-On Is Too Much

One sticking point for Republicans trying to resolve their differences with the White House is how to cut the $600 weekly jobless benefit boost that is expiring.
Republicans largely believe the add-on, which had been approved in an earlier aid bill, is too much and becoming a disincentive for returning to work. In some situations, the boost gives the unemployed more money than if they were working. Under McConnell’s plan, senators proposed cutting it to $200 and then transitioning over the next few months to a new system more closely linked to a state’s own payment levels.
An administration official granted anonymity to discuss the private talks said the White House viewed the Senate GOP’s proposal as too “cumbersome” and the $200 boost as too high.
A number of different solutions were being discussed, the official said Thursday, including dropping the add-on to $100.
Democrats warned time was running out. The benefit officially expires July 31, but due to the way states process unemployment payments, the cutoff is effectively Saturday.
Rep. Richie Neal, D-N.J., chairman of the House Ways & Means Committee, said the nation is on “the eve of an economic catastrophe.”
The U.S. registered its 18th straight week of new jobless claims topping 1 million, with an unemployment rate at 11 percent, higher than during last decade’s Great Recession. A new AP-NORC poll said half of Americans laid off now believe their jobs will not return.
“People need the sustenance of day-to-day life,” Neal said at the Capitol. He said the extra aid not only helps cash-strapped families, but is key to fueling the economy as Americans go without paychecks. “The recovery is going to be slow,” he said.

The unemployment debate is only one of many issues dividing Republicans as they enter negotiations with Democrats over how best to respond to the prolonged coronavirus crisis and devastating economic fallout.
McConnell’s emerging CARES Act II, named after the earlier effort, was expected to include a fresh round of direct $1,200 cash payments to many Americans, a repeat of the money sent in spring, along with $105 billion to help reopen schools, $25 billion for virus testing and McConnell’s top priority of a liability shield to protect businesses, hospitals and others against COVID-19 lawsuits.
Trump was pushing the payroll tax cut, but Senate Republicans didn’t want to include it because they say it does little to help out-of-work Americans. It would also pull revenue away from the tax that funds Social Security and Medicare.
The president relented, but the White House also inserted new priorities — rethinking the jobless benefit and Trump’s preference for a new building to replace the FBI’s aging J. Edgar Hoover Building in downtown Washington, across the street from the Trump hotel.
“This is disarray,” Pelosi said Friday at the Capitol.
Next steps are uncertain after days of closed-door GOP negotiations at the Capitol with Treasury Secretary Steven Mnuchin, White House chief of staff Mark Meadows and others.
“We had expected to be working throughout this weekend,” the Democratic leaders said.
“It is simply unacceptable that Republicans have had this entire time to reach consensus among themselves and continue to flail.

Cluck, Cluck, N’Yuck. No Hens in Clovis for Now.