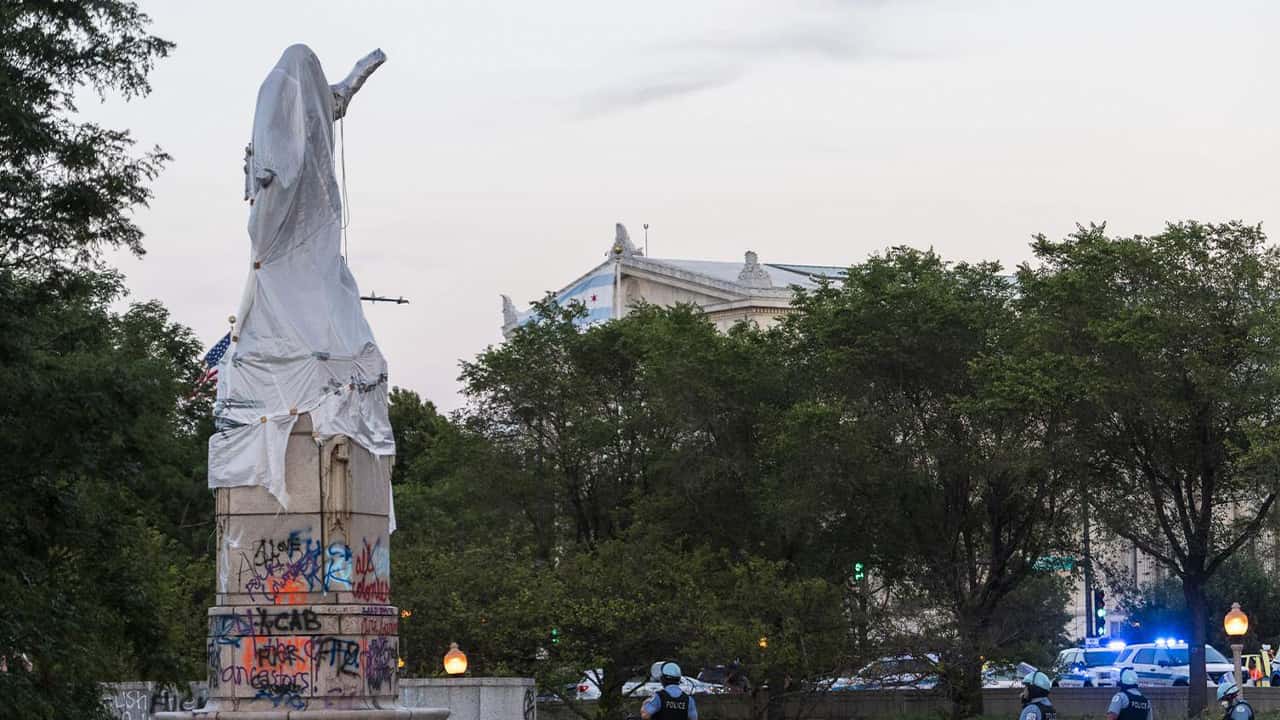 CHICAGO — Two statues of Christopher Columbus that stood in Chicago parks were taken down early Friday at the direction of Mayor Lori Lightfoot, a week after protesters trying to topple one of the monuments to the Italian explorer clashed with police.

“This statue coming down is because of the effort of Black and Indigenous activists who know the true history of Columbus and what he represents,” Stefan Cuevas-Caizaguano, a resident watching the removal, told the Chicago Sun-Times.
Both the Grant Park and Arrigo Park statues were vandalized last month. Statues of Columbus have also been toppled or vandalized in other U.S. cities as protesters have called for the removal of statues of Columbus, saying that he is responsible for the genocide and exploitation of native peoples in the Americas.
Pasquale Gianni of the Joint Civic Committee of Italian Americans said the mayor had told him before their removal that both statues would be moved and temporarily housed elsewhere for public safety reasons.
“The Italian American community feels betrayed. The Mayor’s Office is giving into a vocal and destructive minority. This is not how the Democratic process is supposed to work,” he told WLS-TV.
Lightfoot and the city planned to announce a process “to assess each of the monuments, memorials, and murals across Chicago’s communities, and develop a framework for creating a public dialogue to determine how we elevate our city’s history and diversity,” the mayor’s office added in its statement.
The removals come amid a plan by President Donald Trump to dispatch federal law enforcement agents to the city to respond to gun violence, prompting worries that the surge will inhibit residents’ ability to hold demonstrations. A collection of activist groups had filed suit Thursday, seeking to block federal agents to combat violent crime from interfering in or policing protests.
State officials in Oregon had sued for similar requests following the arrival of federal law enforcement due to nearly two months of protests in Portland since the death of George Floyd in Minneapolis.

US: Chinese Researcher Being Harbored at Consulate in SF