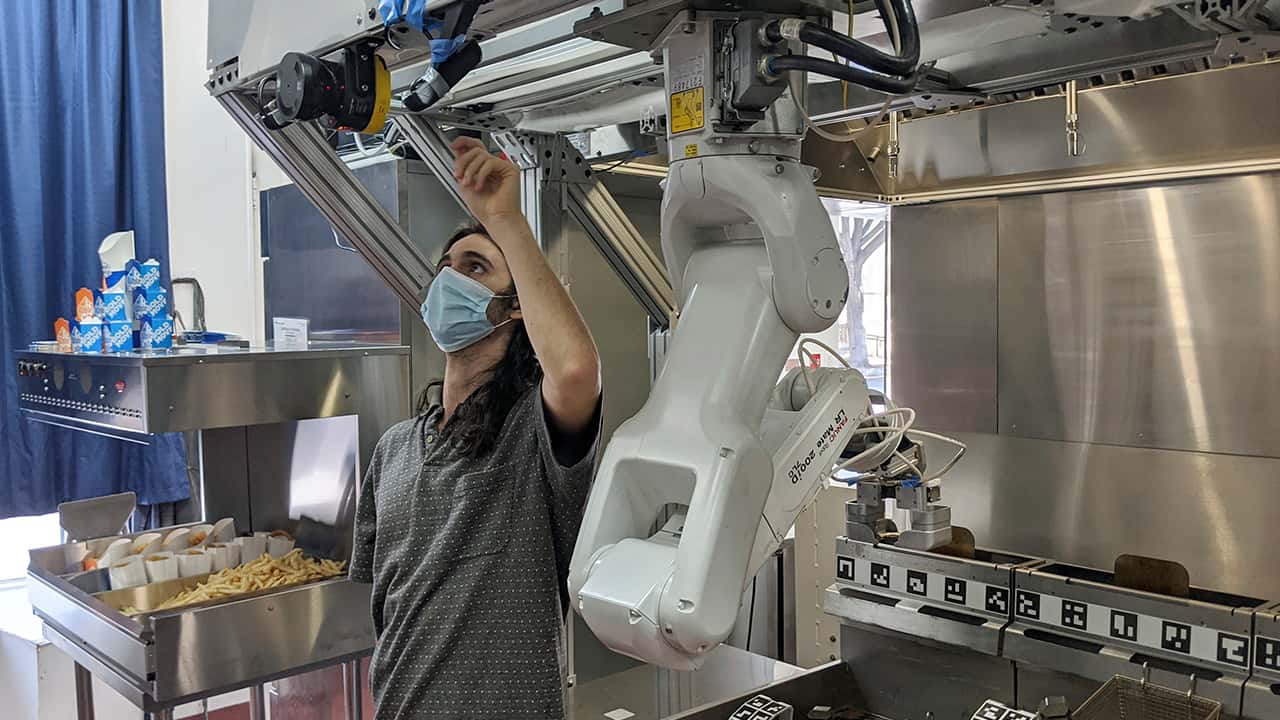 HAYWARD — Robots that can cook – from flipping burgers to baking bread – are in growing demand as virus-wary kitchens try to put some distance between workers and customers.
Starting this fall, the White Castle burger chain will test a robot arm that can cook french fries and other foods. The robot, dubbed Flippy, is made by Pasadena, California-based Miso Robotics.

Only a handful are now operating around San Francisco, but since the pandemic began, Blendid has started contract discussions with hospitals, corporations, shopping malls and groceries.
“What used to be forward-thinking – last year, pre-COVID – has become current thinking,” Jain said.
As salad bars shut down, Hayward, California-based Chowbotics started getting more inquiries about Sally, a robot about the size of a refrigerator that makes a variety of salads and bowls. Sally lets customers choose from 22 prepared ingredients stored inside the machine. It can make around 65 bowls a day before kitchen workers need to refill the ingredients.
Prior to this year, Chowbotics had sold around 125 of its $35,000 robots, primarily to hospitals and colleges. But since the coronavirus hit, sales have jumped more than 60%, CEO Rick Wilmer said, with growing interest from grocery stores, senior living communities and even the U.S. Department of Defense.
Wilkinson Baking Co., whose BreadBot mixes, forms and bakes loaves of bread, has also been getting more inquiries. Randall Wilkinson, the CEO of the Walla Walla, Washington-based company, said the BreadBot serves shifting needs. Grocery shoppers no longer want self-serve options like olive bars, but they still want fresh and local food. Seeing how that food is made also gives them more confidence, he said.
Robot cooks haven’t always been successful. Spyce, a Boston restaurant with a robot-run kitchen, closed in November to retool its menu. Zume, a Silicon Valley startup that made pizzas with robots, shut down its pizza business in January. It’s now making face masks and biodegradable takeout containers.
Max Elder, research director of the Food Futures Lab at the Palo Alto, California-based Institute for the Future, is skeptical about the future of food prep robots once the pandemic has eased.

Robots Can Lower the Demand for Labor

“Food is so personal, and it needs to involve humans,” he said.

Amazon Unveils Shopping Cart That Knows What You're Buying