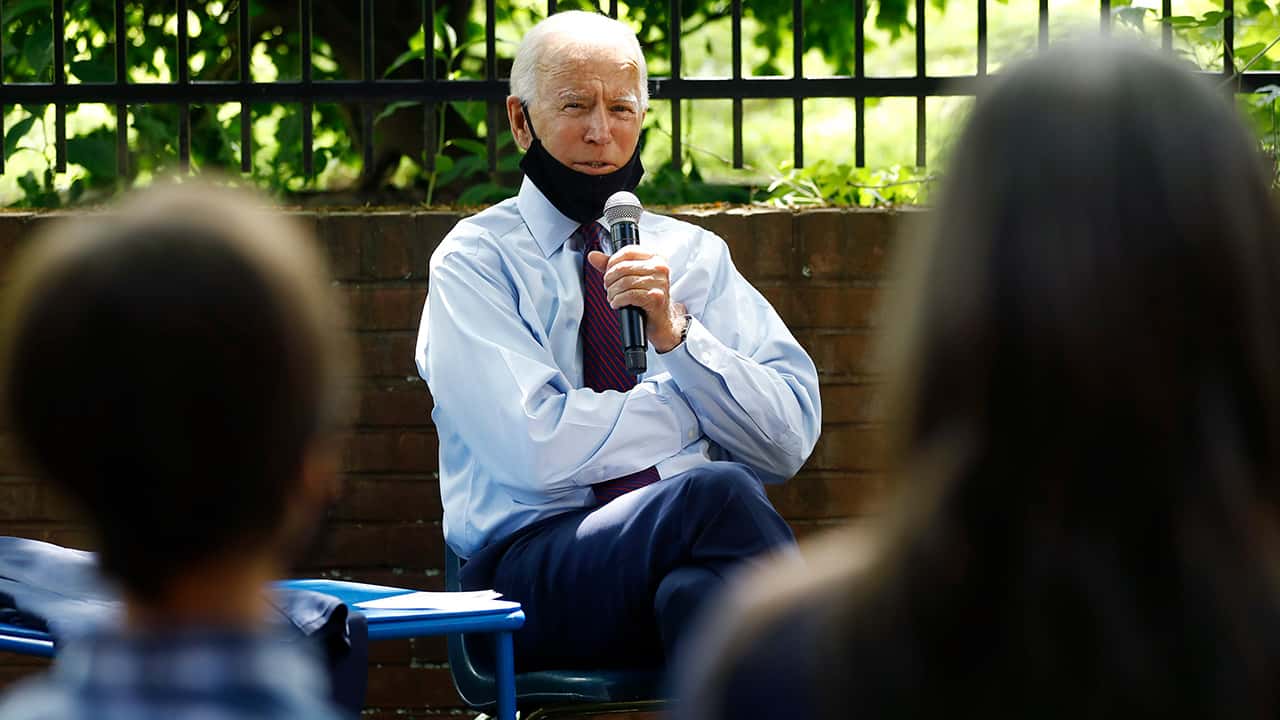 WASHINGTON — The Spanish-language ads for Joe Biden used the same slogan to contrast him with President Donald Trump — “los cuentos no pagan las cuentas,” a play on words that roughly means “telling stories won’t pay the bills.”
But the narrator for the version that aired in Miami had a Cuban accent. In Orlando, Florida, the accent was Puerto Rican. And in Phoenix, it was Mexican.
Biden, the presumptive Democratic presidential nominee, is hoping to capture Florida and other pivotal states by pushing Latino turnout rates higher than when Hillary Clinton was defeated in 2016. A key to doing that is a deeper understanding of Latino voters’ backgrounds thanks to new advancements in “micro-targeting.”
That means using data modeling of voter populations to produce ads and customize outreach aimed at individual ethnic groups within the larger Latino community.
“We now have the capacity to do sub-ethnicity modeling,” Democratic National Committee Chairman Tom Perez, whose parents immigrated to the U.S. from the Dominican Republic, said on a recent conference call with Biden advisers.
“If you meet someone named Perez, or Alex or Rodríguez in Florida — and you want them to vote for Joe Biden — one of the most important things you ought to learn about them is, are they Rodríguez, Alex or Perez de Venezuela, de la Republica Dominicana, de Cuba, de Puerto Rico?” he said. “De” means “from” in Spanish.
Campaigns often target voters with individualized messaging. It’s why presidential candidates stress one theme while trying to woo Midwest African Americans and another for white, suburban women in the South.

Still, top Democrats are betting big that subtle tweaks could pay big dividends. Latino turnout in 2016 fell to 47.6% of eligible voters in that group, down nearly 3 percentage points from 2008, according to U.S. Census surveys. Improving that, they argue, could potentially flip Florida and tighten the race in once steadfastly Republican Arizona.
Biden’s campaign calls hyper-competitive locales like Florida “1% states,” and Perez points to the Democratic Party now being able to micro-target by sub-ethnicity as why the party can be more successful with Latinos than in 2016.
It means “really understanding that we’re not a monolith,” said Julie Chávez Rodríguez, the granddaughter of civil rights leader Cesar Chávez and a senior adviser to Biden’s campaign. “It’s not about taking an English campaign ad and translating it into Spanish and considering that Latino outreach.”
Biden has ground to make up after strong Latino support lifted rival Bernie Sanders to Democratic primary victories in California and Nevada. Rodríguez said Biden has since hired more Hispanics throughout every level of his campaign, while ensuring they’re from different backgrounds. That allows for reaching voters using different cultural nuances and forms of Spanish, which can vary greatly by country.
It may yet be a tall order. Trump has used his sizable campaign cash advantage over Biden to bolster his reelection campaign’s Latino outreach for more than a year. The Republican Party, meanwhile, has also sought to tailor different messages to voters with roots throughout Latin America. A natural fit is older Cuban Americans, who tend to be more conservative and fervently anti-communist.
Similar views can be found among some Venezuelans in the U.S. who ardently oppose that country’s president, Nicolás Maduro. That was part of the reason why Trump, who recently faced backlash after suggesting he might meet with Maduro, quickly backtracked.

Bertica Cabrera Morris, a Latinos For Trump advisory board member, said Democrats’ relying too heavily on sub-ethnicity modeling could seem patronizing.
“What they’re doing is micro-targeting instead of realizing we’re just like the rest of the population,” Cabrera Morris said. “How dare you suggest my problems are different from yours?”
Andrea Mercado, executive director of the voter mobilization organization New Florida Majority, said that when it comes to campaigns better understanding Latinos, “any advance is welcome” but that simply offering ads modified for different audiences isn’t enough.
“We’re looking for the necessary investments to persuade and mobilize Latinos at all levels of elected office,” Mercado said.
Still, individualized messaging may prove especially vital in Florida, which has a deeply diverse Latino population encompassing people with roots in Cuba, the Dominican Republic, as well as Venezuela and other South American countries, and Nicaragua and throughout Central America. It has more than 3 million eligible Latino voters, about 20% of total eligible voters statewide.
Democratic consultant Colin Rogero recalls once producing two versions of a Miami political ad featuring a grandmother talking kitchen table issues that were identical except what she cooked. For Cuban neighborhoods it was black beans and rice. For Puerto Rican areas it was red beans and rice.

In Places Like Texas and California, Latino Populations Are Mostly Mexican American

“You’re not going to deliver a tortilla ad to Cubans in South Florida,” Rogero said. “They’ll go, ‘What the hell is this?’”
The Florida Democratic Party has completed a model of unregistered Puerto Ricans who have moved to the state in recent years and whose numbers swelled following Hurricane Maria’s devastation in 2017, said executive director Juan Peñalosa. The party used that to send out a mailer featuring a photo of Trump jokingly tossing rolls of paper towels to Puerto Ricans at an aid center after the storm.
Peñalosa said party staffers and volunteers have created customized talking points to reach different Latino communities, such as Biden opposing Maduro. Those can be used while conducting phone banks, which, along with texting and digital efforts, have become more vital as the coronavirus outbreak has virtually suspended in-person campaigning.
In places like Texas and California, Latino populations are mostly Mexican American. Still, targeted messaging can be used to better connect with pockets of Latinos in states that aren’t traditionally known for having many of them: Puerto Ricans and Dominicans in Pennsylvania, as well as Latinos of many backgrounds in Milwaukee’s suburbs.
Lorella Praeli, Clinton’s 2016 director of Latino outreach, said Latinos were long viewed as natural Democratic-leaning voters who simply needed to be mobilized. That often meant waiting until too late before the election to launch simple “get out the vote” initiatives, rather than organizing long-term, more expensive efforts to ensure voters have personal stakes in voting.
“It is absolutely an improvement, and it is part of an evolution of really working to get it right,” Praeli, now president Community Change Action, said of sub-ethnicity modeling. “What you do with the data is how you get it right.”

Related Topics:2020 ElectionLatino
Up Next