Acts of kindness may not be that random after all. Science says being kind pays off.

Research shows that acts of kindness make us feel better and healthier. Kindness is also key to how we evolved and survived as a species, scientists say. We are hard-wired to be kind.

Kindness “is as bred in our bones as our anger or our lust or our grief or as our desire for revenge,” said University of California San Diego psychologist Michael McCullough, author of the forthcoming book “Kindness of Strangers.” It’s also, he said, “the main feature we take for granted.”

Kindness “is as bred in our bones as our anger or our lust or our grief or as our desire for revenge,” said University of California San Diego psychologist Michael McCullough, author of the forthcoming book “Kindness of Strangers.” It’s also, he said, “the main feature we take for granted.”

Scientific research is booming into human kindness and what scientists have found so far speaks well of us.

“Kindness is much older than religion. It does seem to be universal,” said University of Oxford anthropologist Oliver Curry, research director at Kindlab. “The basic reason why people are kind is that we are social animals.”

We prize kindness over any other value. When psychologists lumped values into ten categories and asked people what was more important, benevolence or kindness, comes out on top, beating hedonism, having an exciting life, creativity, ambition, tradition, security, obedience, seeking social justice and seeking power, said University of London psychologist Anat Bardi, who studies value systems.

“We’re kind because under the right circumstances we all benefit from kindness,” Oxford’s Curry said.

Kindness and cooperation work for many species, whether it’s bacteria, flowers or our fellow primate bonobos. The more friends you have, the more individuals you help, the more successful you are, Hare said.

For example, Hare, who studies bonobos and other primates, compares aggressive chimpanzees, which attack outsiders, to bonobos where the animals don’t kill but help out strangers. Male bonobos are far more successful at mating than their male chimp counterparts, Hare said. 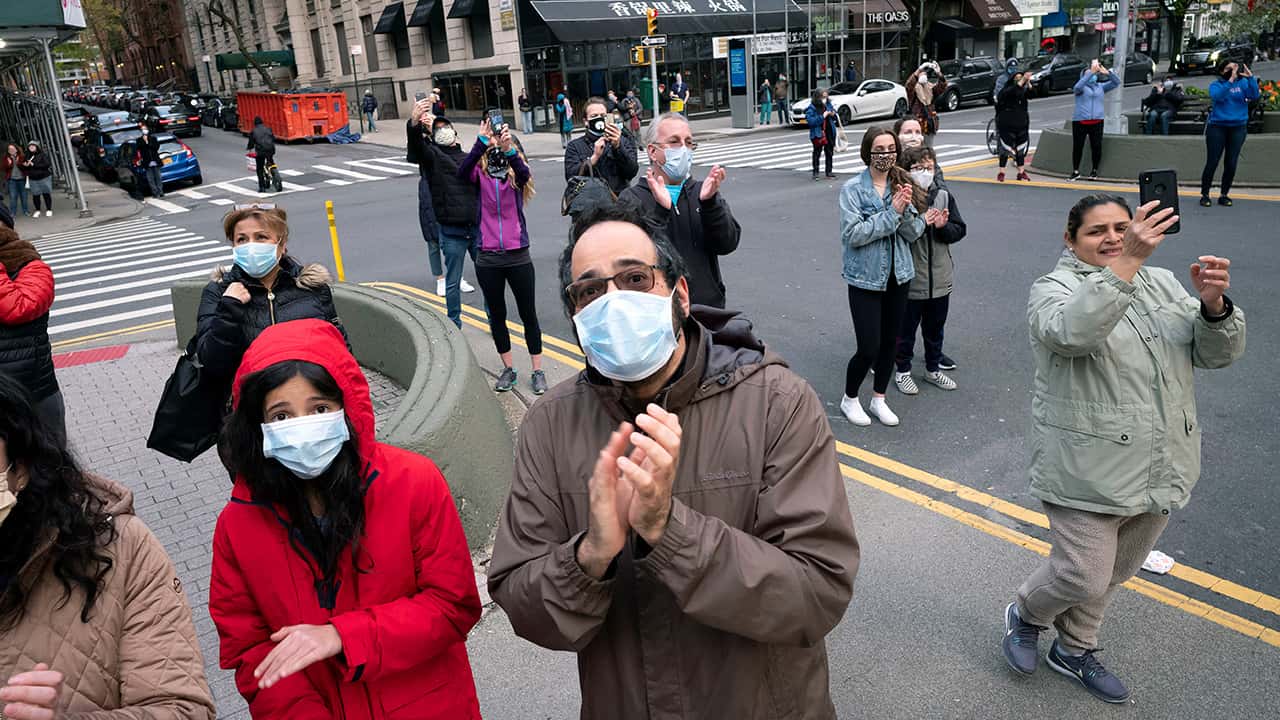 FILE – In this Monday, April 27, 2020 file photo, a small crowd gathers in Manhattan’s Upper West Side to hear stage star Brian Stokes Mitchell sing “The Impossible Dream” from his apartment window in New York. After recovering from the coronavirus, the admired actor and singer opens his window overlooking Broadway each evening to serenade a crowd with his signature song from “Man of La Mancha.” (AP Photo/Mark Lennihan)

McCullough sees bonobos as more the exceptions. Most animals aren’t kind or helpful to strangers, just close relatives so in that way it is one of the traits that separate us from other species, he said. And that, he said, is because of the human ability to reason.

Humans realize that there’s not much difference between our close relatives and strangers and that someday strangers can help us if we are kind to them, McCullough said.

Reasoning “is the secret ingredient, which is why we donate blood when there are disasters” and why most industrialized nations spend at least 20% of their money on social programs, such as housing and education, McCullough said.

Duke’s Hare also points to mama bears to understand the evolution and biology of kindness and its aggressive nasty flip side. He said studies point to certain areas of the brain, the medial prefrontal cortex, temporal parietal junction and other spots as either activated or dampened by emotional activity. The same places give us the ability to nurture and love, but also dehumanize and exclude, he said.

When mother bears are feeding and nurturing their cubs, these areas in the brain are activated and it allows them to be generous and loving, Hare said. But if someone comes near the mother bear at that time, it sets of the brain’s threat mechanisms in the same places. The same bear becomes its most aggressive and dangerous.

Hare said he sees this in humans. Some of the same people who are generous to family and close friends, when they feel threatened by outsiders become angrier. He points to the current polarization of the world.

But overall our bodies aren’t just programmed to be nice, they reward us for being kind, scientists said. 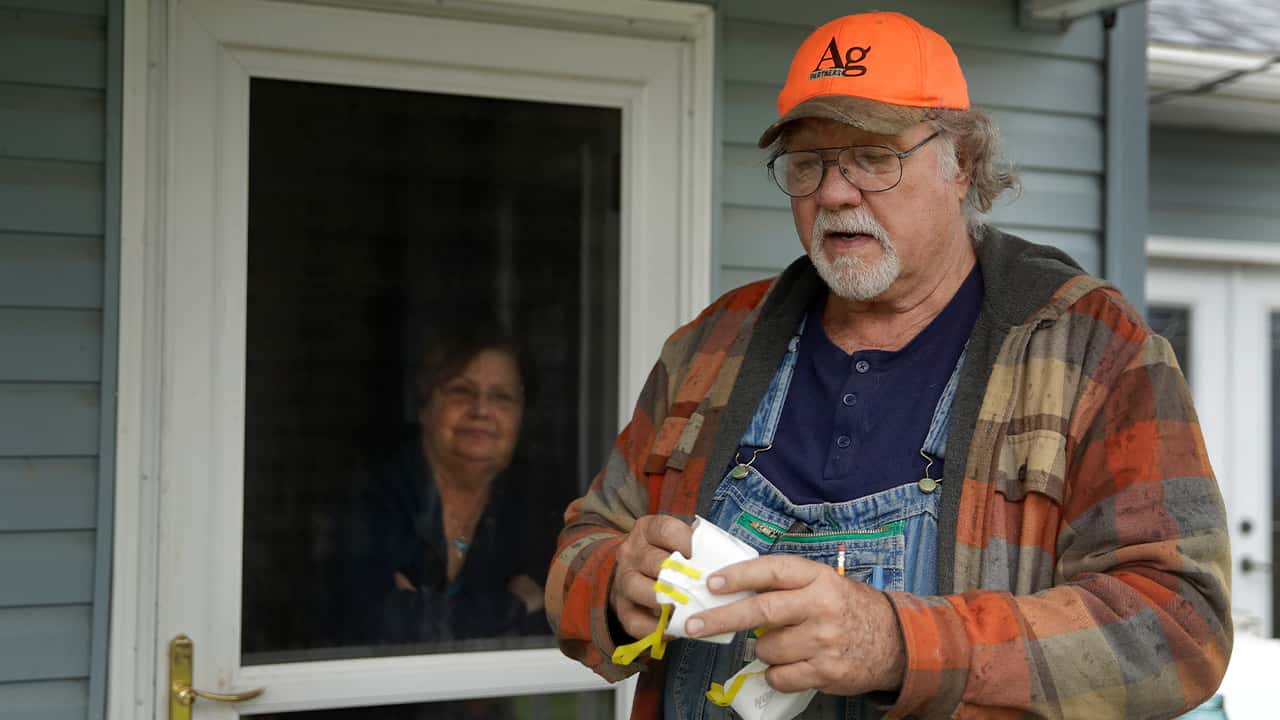 FILE – In this Friday, April 24, 2020 file photo, Dennis Ruhnke holds two of his remaining N-95 masks as he stands with his wife, Sharon at their home near Troy, Kan. Dennis, a retired farmer, shipped one of the couple’s five masks left over from his farming days to New York Gov. Andrew Cuomo for use by a doctor or a nurse. (AP Photo/Charlie Riedel)

‘Acts of Kindness Are Very Powerful’

“Doing kindness makes you happier and being happier makes you do kind acts,” said labor economist Richard Layard, who studies happiness at the London School of Economics and wrote the new book “Can We Be Happier?”

In one experiment, she asked subjects to do an extra three acts of kindness for other people a week and asked a different group to do three acts of self-kindness. They could be small, like opening a door for someone, or big. But the people who were kind to others became happier and felt more connected to the world.

The same occurred with money, using it to help others versus helping yourself. Lyubomirsky said she thinks it is because people spend too much time thinking and worrying about themselves and when they think of others while doing acts of kindness, it redirects them away from their own problems.

Lyubomirsky said a study of people with multiple sclerosis and found they felt better physically when helping others. She also found that in people doing more acts of kindness that the genes that trigger inflammation were turned down more than in people who don’t.

And she said in upcoming studies, she’s found more antiviral genes in people who performed acts of kindness.