After learning from the media that dozens of coworkers tested positive for the coronavirus, about 50 workers at a Wasco pistachio farm went on strike Thursday. 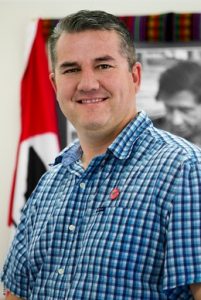 “They wanted to keep everything confidential, and at the same time, people getting contaminated.” — Armando Elenes, vice president, United Farm Workers

The strikers are demanding free face coverings and gloves from Primex Farms so they can protect themselves from COVID-19, said Armando Elenes, vice president of the United Farm Workers union.

The workers are also seeking better sanitation measures at the worksite and information about coworkers who have tested positive.

“They wanted to keep everything confidential, and at the same time, people getting contaminated,” Elenes said of Primex Farms, which has 5,000 acres of pistachio orchards in California and grows other nuts and dried fruits.

A Primex official said that the company would issue a statement later Thursday.

Workers learned of the cases about two weeks ago when fellow workers started getting sick but only heard that 31 had tested positive from a report on local television, Elenes said.

Elenes said a group of about 50 workers was participating in the strike and would decide each day whether to continue. Other workers at the farm did not go on strike, he said.