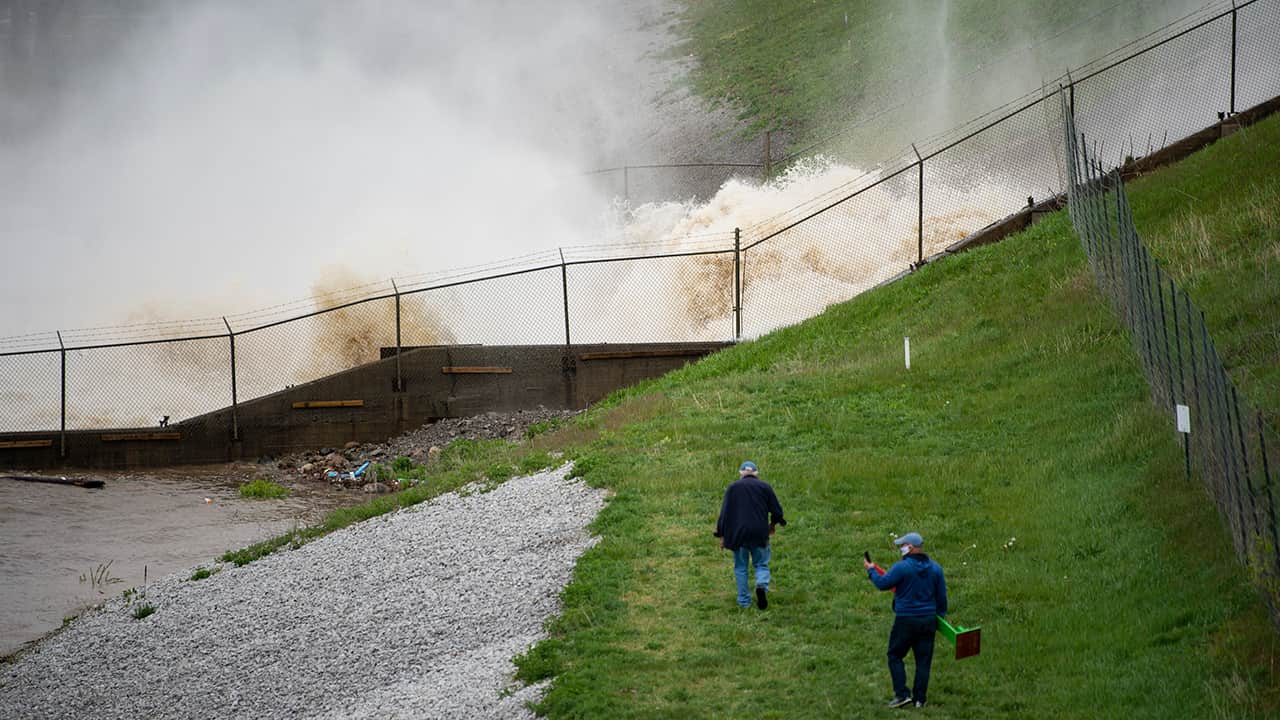 MIDLAND, Mich. — Rapidly rising water overtook dams and forced the evacuation of about 10,000 people in central Michigan, where flooding struck communities along rain-swollen waterways and the governor said one downtown could be “under approximately 9 feet of water” by Wednesday.

For the second time in less than 24 hours, families living along the Tittabawassee River and connected lakes in Midland County were ordered Tuesday evening to leave home. By Wednesday morning, water that was several feet high covered some streets near the river in downtown Midland, including riverside parkland, and reaching a hotel and parking lots.

The river in Midland on Wednesday morning topped a previous record reading of 33.9 feet set during flooding in 1986, the National Weather Service said. Its flood stage is 24 feet, and it was expected to crest by day’s end at about 38 feet.

The Weather Service urged anyone near the river to seek higher ground following “castastrophic dam failures” at the Edenville Dam, about 140 miles north of Detroit, and the Sanford Dam, about seven miles downriver. The evacuations come as Michigan remains under a stay-at-home order to prevent the spread of the coronavirus.

While Michigan has been a national hotspot for COVID-19 with more than 52,000 cases and 5,000 deaths, Midland County has had only a small number of those with fewer than 80 cases and less than 10 deaths. Still, some dealing with the flooding and evacuations remained aware of the dangers posed by the virus.

Cots at some area schools set up Tuesday as shelters were spaced apart to adhere to social distancing guidelines.

“In the next 12 to 15 hours, downtown Midland could be under approximately 9 feet of water,” the governor said during a late Tuesday briefing. “We are anticipating an historic high water level.” 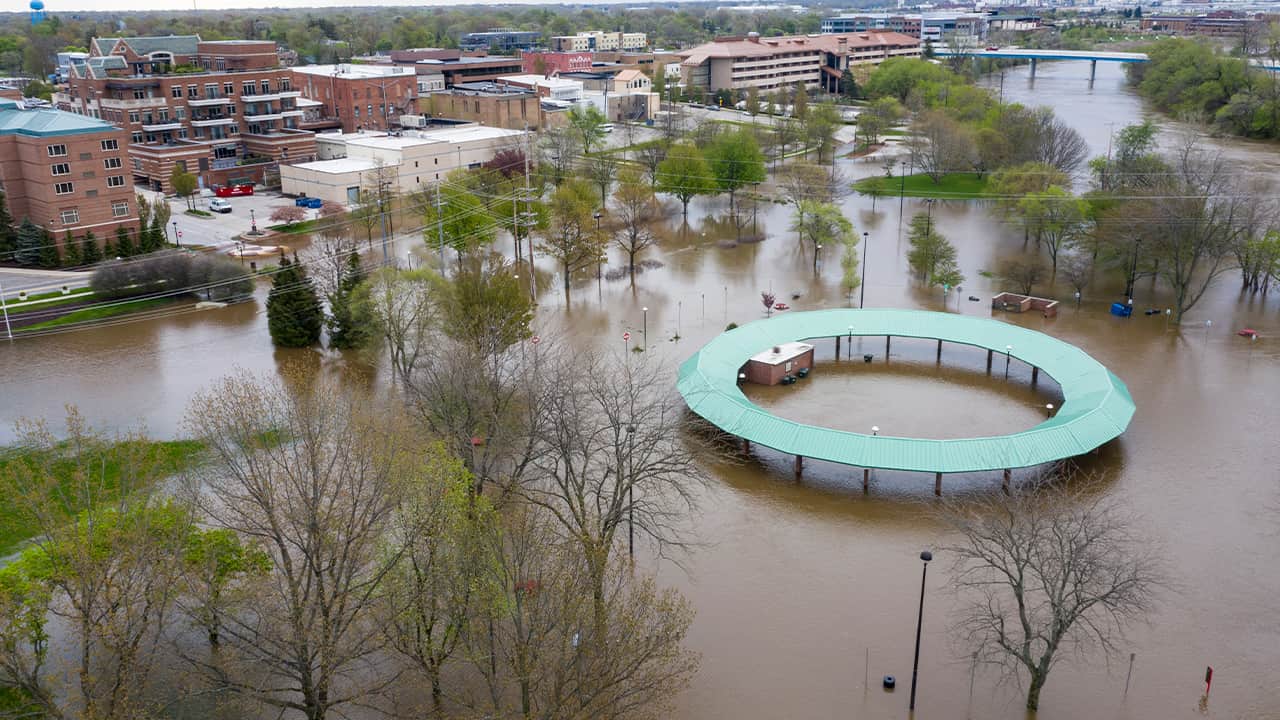 Water floods the Midland Area Farmers Market and the bridge along the Tittabawassee River in Midland, Mich. on Tuesday, May 19, 2020. (Kaytie Boomer/MLive.com/The Bay City Times via AP)

Communities in Saginaw County Were on Alert for Flooding

Midland is a quintessential company town with a downtown parks located at the confluence of the Tittabawassee and Chippewa rivers. It has been home to the global chemical giant Dow for more than 120 years. One high school is named after the company’s founder. The other high school’s mascot is the Chemics. A Dow foundation has funded many community amenities such as a botanical garden.

On Tuesday, Dow Chemical activated its emergency operations center and will be adjusting operations, spokeswoman Rachelle Schikorra said in an email.

Steve Carlson, 61, said he and his wife, Patty, fled their Midland home about 8:30 p.m. Tuesday on their own accord after an evacuation order was issued for large swath of the city and they noticed neighborhood creeks were spilling over local roads, threatening some homes.

“They had risen a lot and the worst was yet to come,” he said Wednesday morning.

One couple who lives in their neighborhood decided to stay put, but Carlson said everyone else evacuated themselves from the area. They spent the night in a hotel. He said they’ve been wearing face masks in the hotel to protect themselves from the coronavirus.

“The hotel was very happy to be see people coming in. There were refugees coming in,” he said with a laugh.

Further down the Tittabawassee River, communities in Saginaw County were on alert for flooding.

Whitmer declared a state of emergency for Midland County and urged residents threatened by the flooding to find a place to stay with friends or relatives or to seek out one of several shelters. She encouraged people to do their best to take precautions to prevent the spread of the coronavirus.

No Reported Injuries or Fatalities Due to the Flooding

Emergency responders had gone door-to-door early Tuesday morning warning residents living near the Edenville Dam of the rising water. Some residents were able to return home, only to be told to leave again following the dam’s breach several hours later. The evacuations include the towns of Edenville, Sanford and parts of Midland, according to Selina Tisdale, spokeswoman for Midland County.

There have been no reported injuries or fatalities due to the flooding, and no reports of anyone trapped by the high water, Tisdale said Wednesday.

In 2018, the Federal Energy Regulatory Commission revoked the license of the company that operated the Edenville Dam due to non-compliance issues that included spillway capacity and the inability to pass the most severe flood reasonably possible in the area.

Both dams are in the process of being sold.

There were 19 high hazard dams in unsatisfactory or poor condition in Michigan in 2018, ranking 20th among the 45 states and Puerto Rico for which The Associated Press obtained condition assessments.

Flood warnings in Michigan were issued following widespread rainfall of 4 to 7 inches (10.2 to 17.8 centimeters) since Sunday, according to the Weather Service. Heavy runoff pushed rivers higher. Saturday could see a 30% chance of rain, with more moving into the area Sunday and Monday.

“Our hope is we get a little time for the water to recede,” Tisdale said.