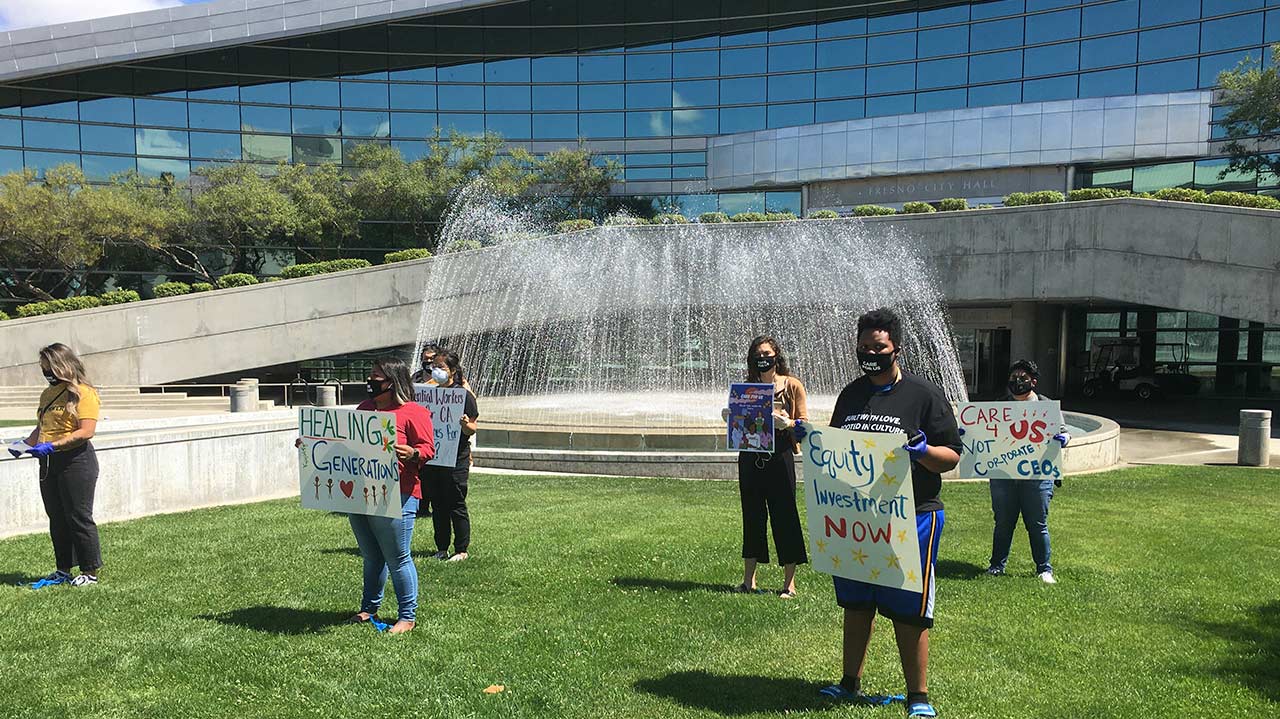 About 15 protesters with Power California, gathered wanting more federal support for workers left behind during the pandemic.

Jasmine Leiva, one of the organizers, wants support for the families of farmworkers, packing plant employees, and grocery clerks.

“Our families bear the brunt of being the essential workers,” Leiva said. “We acknowledged they are heroes. They need that economic support. … The stimulus check was a good one-time solution. But how do we have support that helps people weather this storm?”

One Fresno police officer arrived, checking in with both groups to keep the peace. Seeing that peace was being kept, the officer left the plaza.

Three anti-Miguel Arias protesters also demonstrated, including Jason Phillips — who was involved in an alleged scuffle with Arias earlier in the week. Phillips and two others filed battery charges against the Fresno City Council president. The case is scheduled for court in September.

They were later joined by conservative activist Ben Bergquam.

Over the objections of the city’s bus union, the Fresno City Council approved 7-0 to accept a study that could change a bus route to take riders to the new Fresno County Department of Social Services campus at the former Pelco facility in Clovis.

The county has planned the move for at least three years to move its operations to one central location. Based on the discussion, some city staff and the council were surprised.

“It caught us off guard,” assistant city manager Jim Schaad told the council.

ATU, the bus employee union, is concerned that changing Route 28 will cause a disruption of service on the line that connects west Fresno to Fresno State through the Manchester Transit Center.

Transportation officials told the council the goal is to connect city residents to social services.

Councilman Luis Chavez agreed to support the study, with a vote on the actual change at a later date. He said he wants the county to chip in for the change in bus service.

“I don’t think its OK at this point,” Chavez said.

No public services have moved to Clovis yet, according to county spokesman Jordan Scott.

“We have roughly 460 administrative staff at Pelco now with no public services at the facility at this time. Additional buildings are expected to open later this year, but no word on expected dates quite yet,” Scott said.  “The Pelco site will consolidate all the DSS locations in the Fresno metro area. Our rural sites should remain open. That would include field offices in Coalinga, Reedley, and Selma.”

The council approved $562,400 in four separate contracts with the Fresno Equal Opportunities Commission to help get the word out about the Transformative Climate Change Program.

The city is in the midst of spending the $66 million the state awarded the city for various environmental-themed projects in southwest Fresno.

Fresno EOC will be tasked with creating videos, radio spots, and holding informational meetings about the Transform Fresno program.

Chavez recused himself from the 6-0 vote. His wife, Elizabeth Jonasson Rosas, works for Fresno EOC.

Table for Two on Sidewalk, Patio or Parking Lot? Fresno Explores Its Options.