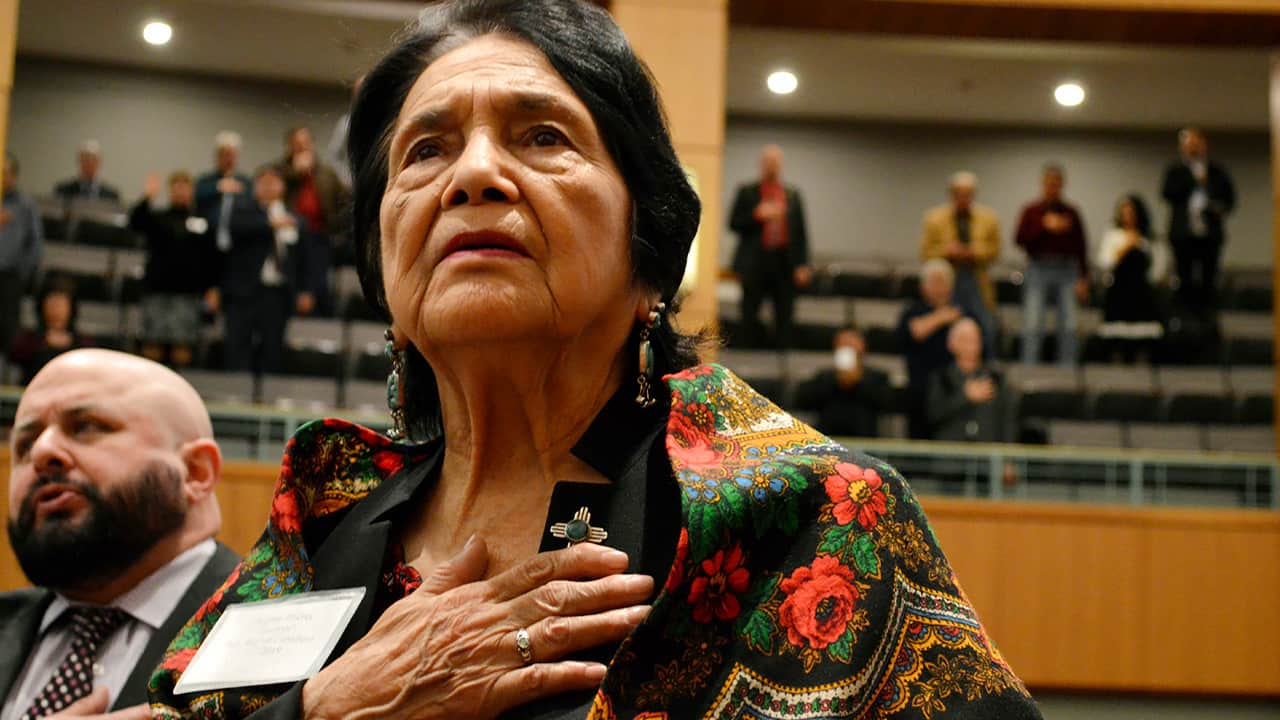 WASHINGTON — Labor and civil rights activist Dolores Huerta on Friday endorsed Joe Biden for president, giving him the backing of one of the nation’s most prominent Latino leaders.

Huerta will appear on Sunday at an online Todos Con Biden, or Everyone with Biden, event and said in an interview with The Associated Press she plans to do “whatever I possibly, humanly can to make sure that Joe Biden gets elected.”

The endorsement comes as the campaign says it’s ramping up Latino outreach, expanding some of the efforts it launched in key states during the primary in an effort to strengthen Biden’s support with a voting bloc it acknowledges could be pivotal to his success in November. The former vice president initially struggled to win over Latino voters during the primary after facing criticism for the Obama administration’s record on immigration.

Huerta will appear on Sunday at an online Todos Con Biden, or Everyone with Biden, event and said in an interview with The Associated Press she plans to do “whatever I possibly, humanly can to make sure that Joe Biden gets elected.”

“Our community has just been under constant, constant attack by the current administration,” said Huerta, who is based in Los Angeles. “We need somebody who is going to bring everybody together and end the racism and hostility that has been created.”

During the primary, however, Huerta endorsed California Sen. Kamala Harris and criticized Biden for his comments during a primary debate on immigration, accusing him of “speaking just like the Republicans” when he expressed opposition to the idea of decriminalizing border crossings during a Democratic primary debate.

But she told the AP on Friday that she trusts Biden to prioritize the challenges confronting Latinos and noted that immigration reform “is something the president can’t do,” noting big reforms require congressional action.

“I don’t think we’ll have to pressure him” on immigration reform, she said. “I think he realizes what the issues are.”

It’s a notable shift for a key voice in the Latino community, one that suggests Biden is making inroads with a community in which he initially faced challenges. Primary opponent Bernie Sanders’ strength among Latinos helped him build early momentum over Biden, who faced immigration protesters and criticism from opponents over the Obama administration’s record number of deportations.

Biden senior adviser Cristobal Alex said in an interview that the campaign’s initial struggles with the Latino community were due to a lack of resources that made it tougher for him to get his message out. Alex noted that the candidate’s support among Latinos got stronger in some of the earlier primary states and said that the Biden campaign plans to expand a number of its Latino-focused outreach efforts for the general election.

Alex predicted “record” Latino turnout for Biden. The voters in that bloc, Alex said, “are poised to be the difference-makers” in this year’s election, noting the “fast-growing Latino populations” in swing states including Ohio, Pennsylvania and Michigan.

“We’re not taking any vote for granted. We have to compete for Latino voters, not just in places like Arizona and Florida, which people think automatically are Latino states, or Colorado and Nevada, but places like Ohio, where there’s a large Puerto Rican population, or there’s a large Dominican population in Pennsylvania,” he said. “So we’re going to be very attuned to the community in each state.”