ROUNDUP, Mont. — Traffic got a little busier along Main Street, but otherwise, it was hard to tell that coronavirus restrictions were ending in the tiny Montana town of Roundup.

That’s because it’s largely business as usual in the town of 1,800 people. Nonessential stores could reopen as a statewide shutdown ended this week, but most shops in Roundup — the pharmacy, the hardware store, two small grocers — were essential and never closed.

A florist and a thrift shop reopened Monday, apparently two of the only stores that had to shut down at all. Bars and restaurants remain shuttered and getting takeout is still the only option until May 4, when they can open with restrictions.

Parts of the U.S. are starting to lift closures, and some of the quickest to do so have been rural states like Montana, Vermont and Alaska. The effects of the pandemic in small towns can seem a world away from cities grappling with overwhelmed hospitals, packed morgues and economies pushed to the brink.

The consequences of easing restrictions in rural communities won’t be fully known for some time, and health officials said they will be watching closely for a resurgence of infections.

But for now, there’s little doubt in places like Roundup that it was the right thing to do after weekslong stay-at-home orders.

“We don’t have the fear of the virus. It’s been more concern about our shut-ins and older people who can’t come out,” said Shannon Thompson, who works in the deli at Picchinoni’s IGA supermarket and has two sons home with school still canceled.

The coronavirus is largely a distant threat that so far has touched few people here directly. Face masks are a novelty, and greetings often still come with a handshake.

Rural Counties Want Gov. Newsom to Let Them Chart Their Own Course for Reopening

Despite some grumbling that the lockdown was too harsh, most people cooperated, county commissioner Adam Carlson said.

Thompson said she practices social distancing and “we’re all doing what we’re supposed to do.”

By contrast, in some rural parts of states where stay-at-home orders remain in place, local leaders have pledged defiance. The mayor of Grants, New Mexico, population 9,000, led a rally Monday attended by dozens of people urging nonessential businesses to reopen.

Only a fraction of people in the state have been infected by COVID-19, and it doesn’t make sense to keep small businesses closed, Mayor Martin “Modey” Hicks said. New Mexico has more than 2,800 confirmed cases of the virus and 104 deaths.

“The governor is killing the state over a little bug,” he said before heading to the city-owned golf course, where about 20 people were playing despite a warning by state police for the facility to close.

In California, a group of rural counties with a combined 500,000 people want Gov. Gavin Newsom to let them chart their own course for reopening.

Leaders from six Northern California counties asked Newsom Monday if they could begin a “careful and phased reopening,” even as counties in the San Francisco Bay area moved to extend their stay-at-home orders through May.

For most, the coronavirus causes mild or moderate symptoms, such as fever and cough. For some, especially older adults and people with existing health problems, it can cause more severe illness, including pneumonia and death. 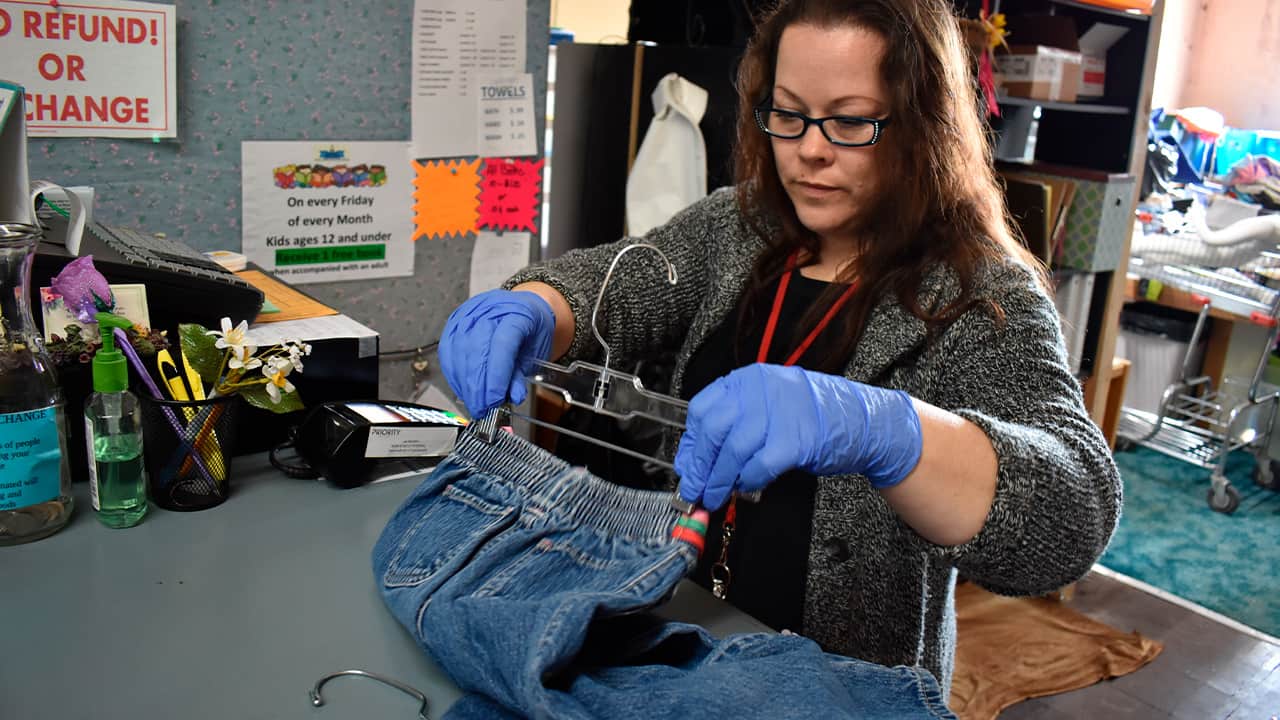 Nicole Snider checks out a customer at the Northern Treasure thrift store in Roundup, Mont. on Monday, April 27, 2020. The store was one of only a few to reopen in the town as coronavirus restrictions were eased since many businesses had stayed open. (AP Photo/Matthew Brown)

In small Alaska towns, some restaurants resumed dine-in service on Friday, while shops, personal care services and other nonessential businesses reopened with limits. Rules still restrict how many people can be in a shop at once, and no waiting is allowed in salons.

In Vermont, people can shop at outdoor retailers, and five people can work at the same outdoor worksite. Manufacturing and indoor construction also can expand.

Mike MacLeod, who owns a garden center just south of the resort town of Stowe, said the phone began ringing within miutes of the governor’s announcement Friday loosening the restrictions.

“People are getting into their gardens,” he said. “One of the things they can do is work on the gardens and beautify their houses.”

Yet a rural ZIP code is no magic shield and carries its own disadvantage: fewer medical resources. That can make outbreaks difficult to contain, such as the infections that swept through an assisted living facility in recent weeks in another small Montana town, Shelby, leading to six deaths.

Not Every Business Is Throwing Open Its Doors

“No matter where you are, this is a dangerous virus,” Mentel said. “The risk is low, but if something takes off in rural America, it could be devastating.”

Gov. Steve Bullock credits an early lockdown with pushing down Montana’s infection rate and helping it reopen before other states.

“That’s what got us to this point, more than the rural nature of our state,” the Democratic governor said Monday.

Montana has one of the lowest per capita death rates from the virus in the nation, and the rate of confirmed cases has declined since since peaking at 124 cases a week in late March and early April. There were 15 new cases last week, health officials said.

But not every business is throwing open its doors.

In Montana’s capital of Helena, the Lasso the Moon toy store was open, but its doors were locked. Customers had to knock to be let in, up to four at a time, as long as they were wearing masks.

Owner Amy Barrett said the door is locked to give employees a chance to don masks. Her wariness reflected the uncertainty of many small-business owners who have been allowed to reopen.

“We’re still unsure quite how open to be,” Barrett said. “I don’t know how many people are going to want to come in.”