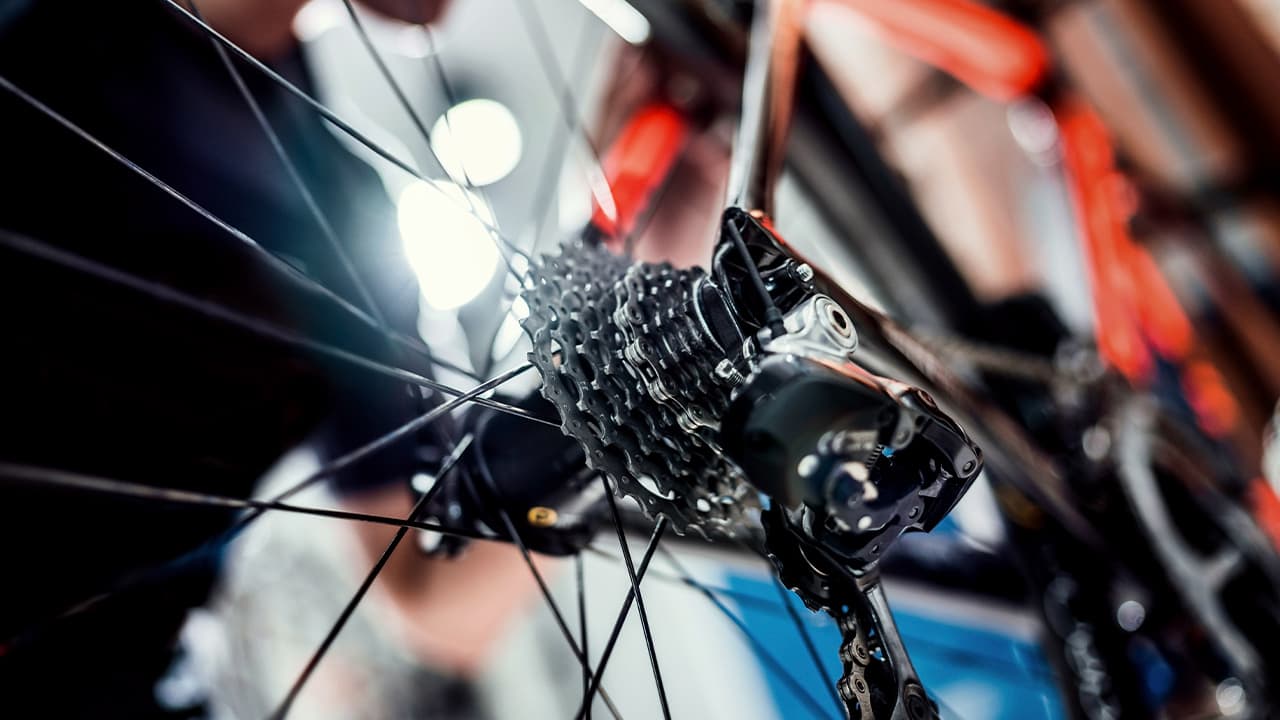 If there’s a silver lining to the dark cloud that is the COVID-19 pandemic, it’s the greenbacks spent at area bicycle shops on new bikes or to recondition old two-wheelers gathering dust in the garage.

Bicycle shop owners in Fresno and Clovis say they’ve been scrambling to keep up with the demand that began in mid-March when Californians were urged to stay at home to slow the spread of the novel coronavirus, which is highly contagious and sometimes fatal.

Many families looking for fun activities that parents and kids can do together are opting for bicycle outings.

The surge in customers has caused area shops to work overtime to stay on top of orders and their inventories.

John McCracken, co-owner of Sunnyside Bicycles in southeast Fresno, says that demand for bicycles has been “a tidal wave, a tsunami.”

So many customers have come to the Clovis Bicycle Co. on Herndon Avenue to purchase a bicycle that owner Dan Caton jokes about his inventory: “You can have any color you want, as long as it’s red in the men’s and orange in the women’s.”

“Last week I pretty much sold out of all my new bikes,” he said. “I’ve got some kids’ bikes, but pretty much everything has been sold.”

He says his suppliers are having a hard time meeting the surging demand.

“This whole thing caught us by surprise.”

Since the coronavirus restrictions hit, the store is open to customers only by appointment, and only one at a time, she said. In addition to bike sales, the shop does repairs and tune-ups, Overturf said.

Caton said he’s backlogged about three weeks on repairs and reconditioning, hobbled by the loss of his trusted assistant, a high schooler he says is a “super-good worker, and I really miss him.”

Unfortunately for Caton, the high schooler’s parents insisted he remain sheltered at home after March 13.

Caton said he’s heard that other shops are four or even five weeks behind on service work. He’s had to adjust his store opening from 10 a.m. to noon to give himself more time in the mornings to work on bikes.

“It’s just crazy,” he said on speakerphone Wednesday afternoon, doing an interview with GV Wire as he continued to work. “But I’m not complaining. At least I’m employed.” 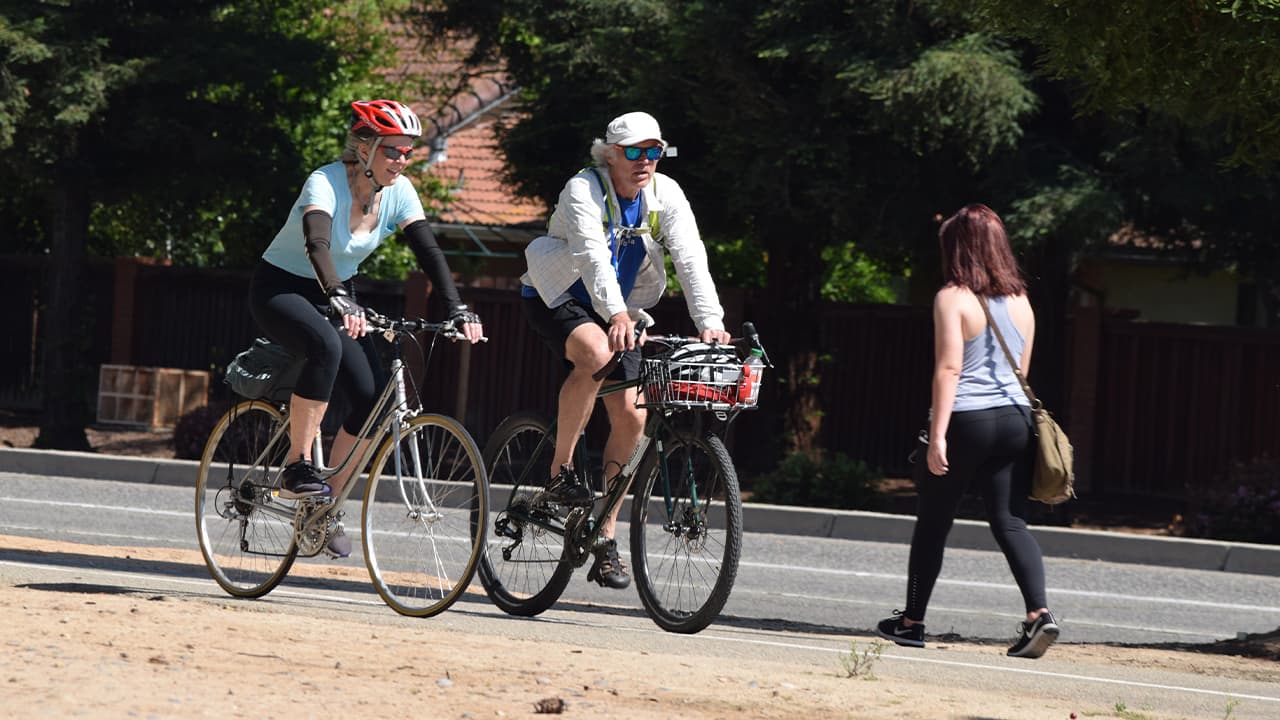 Bicyclists pedal along the trail next to Shepherd Avenue in northeast Fresno on Thursday. (GV Wire/Nancy Price)

At Steven’s Bicycles on Willow Avenue in northwest Clovis, there’s still plenty of inventory, reports co-owner Tina Kutzbach. The problem is having enough time to assemble the bicycles that people are buying and still keep up with repairs and tune-ups.

“It has been just nonstop,” she said. “It’s pretty much insane.”

People who haven’t been bicycle riding for a decade or more are calling about buying a bike, Kutzbach said.

“We’re selling them faster than we can build them.” — Sunnyside Bicycles co-owner John McCracken

And the pleasant spring weather in recent weeks has encouraged more families to hit the pedals, she said.

So far at Sunnyside Bicycles, it’s been all sales and only one or two repairs. McCracken and his wife Vanessa decided to close the store in mid-March when the state of California and the city of Fresno directed residents to stay home and socially isolate. Employees continued to be paid and were told to stay home and be with their families, he said.

So Many Bikes, So Little Time

He waited to reopen until the city declared bicycle shops essential businesses. On April 1, he and his wife returned to the store and began working to meet the online orders flooding in.

By the second week, McCracken brought back one mechanic to help with bike assemblies.

He said he usually only sees brisk business like this in the days before Christmas, but now “every day is Dec. 20.”

McCracken soon needed to bring back his second mechanic to assemble bikes. He set up individual work zones so they could maintain their distance. 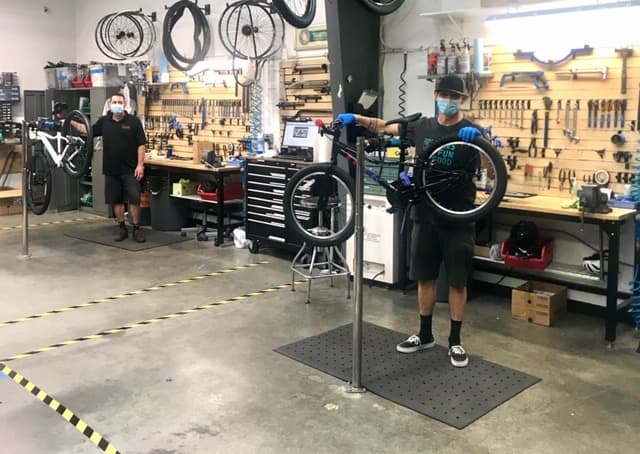 Customers can pick up bikes outside the store, and McCracken makes home deliveries at the end of the day.

Meanwhile, McCracken is planning for how the store will look when it fully reopens. Customers will have to wear masks, will only enter one door and exit through the other door, and will have designated places to stand to talk to sales staff, who also will work in separate zones, he said.

His top goal is to protect staff and customers from the coronavirus.

The boom in bicycles has been a boon to the business, but McCracken says he feels guilty knowing that his good fortune is the result of a virulent disease that is sweeping across the planet and threatens to kill millions of people.

Even though the world to him today looks a lot like it did in the 1980s, before there were video games and cell phones, when families hung out in their front yards or rode bicycles together, McCracken said he would gladly trade all that, and his business gains, if it meant there was no coronavirus.

“I’m not grateful for this at all,” he said somberly.