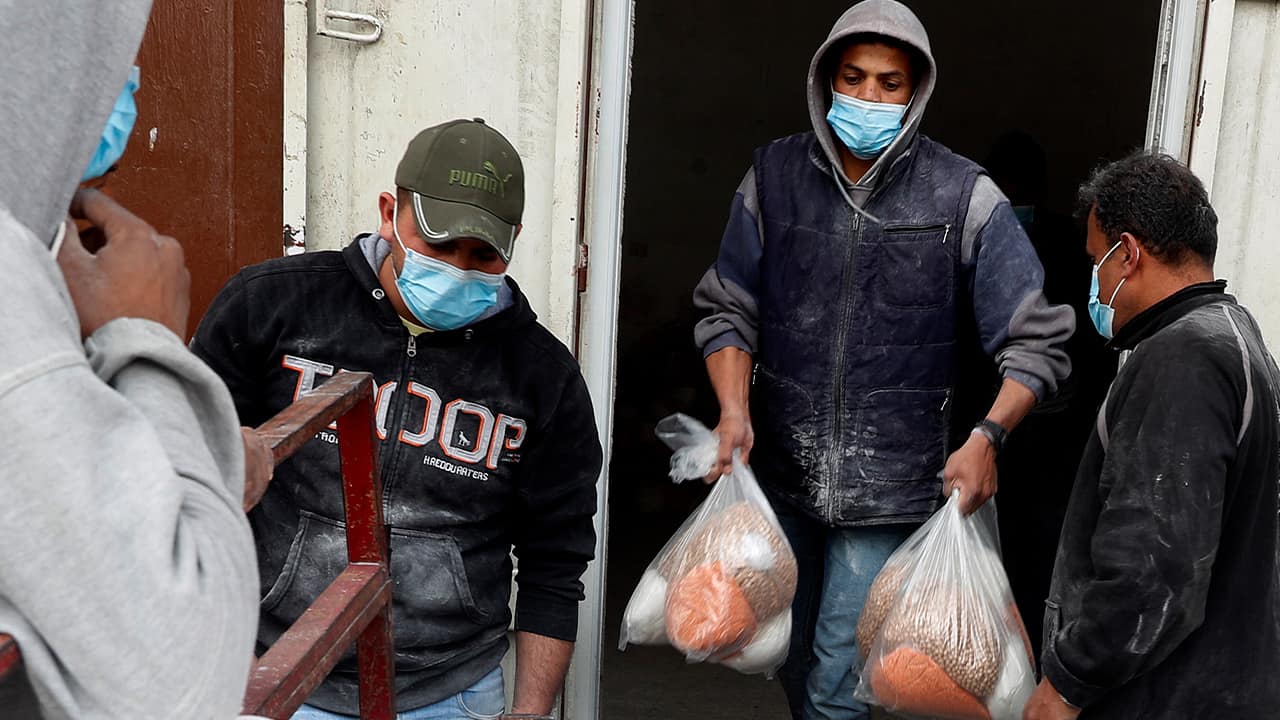 GAZA CITY, Gaza Strip — A U.N. aid agency Tuesday began delivering food to the homes of impoverished Palestinians instead of making them pick up such parcels at crowded distribution centers — part of an attempt to prevent a mass outbreak of the new coronavirus in the densely populated Gaza Strip.
As the virus continued to spread across the Middle East, Iran, the hardest-hit country in the region, reported 141 new deaths, pushing the death toll closer to 3,000 people.
Late Tuesday, Gaza’s Health Ministry said two more cases have been confirmed among travelers who returned from Egypt, bringing the number to 12.
In Israel, defense officials said they had converted a missile-production plant into an assembly line for much-needed breathing machines. Saudi Arabia, meanwhile, said it would pay medical expenses for anyone infected with the virus.
In Gaza, the U.N. Relief and Works Agency for Palestinian refugees has for decades provided staples like flour, rice, oil and canned foods to roughly half of the territory’s 2 million people. Under the old system, those eligible lined up at crowded distribution centers four times a year to pick up their aid parcels. Starting on Tuesday, the agency began making home deliveries.
“We assessed that tens of thousands of people will pour into the food distribution centers and this is very dangerous,” said Adnan Abu Hasna, the agency’s spokesman in Gaza. Palestinian workers unloads food supplies distributed by the United Nations Relief and Works Agency (UNRWA) for poor refugee families, at the Sheikh Redwan neighborhood of Gaza City, Tuesday, March 31, 2020. The United Nations has resumed food deliveries to thousands of impoverished families in the Gaza Strip after a three-week delay caused by fears of the coronavirus. UNRWA, provides staples like flour, rice, oil and canned foods to roughly half of Gaza’s 2 million people. (AP Photo/Adel Hana)

Twelve People Have Tested Positive for Coronavirus in Gaza

Some 4,000 deliveries were made Tuesday, with an estimated 70,000 others to be made over the next three weeks, he said. Drivers on three-wheel motorcycles dropped off the food, calling people out of their homes, confirming their identities and leaving the bags outside. The agency instructed people to stay 2 meters ( about 6 feet) from the delivery men to minimize the risk of infection.
“This makes it easy for us,” said Manal Ziara, a resident of Shati refugee camp in west Gaza City. “The old mechanism causes crowding and touching that help the virus spread.”
Twelve people have tested positive for coronavirus in Gaza, whose borders have been largely sealed by Israel and Egypt since the Islamic militant group Hamas seized the territory in 2007.
However, there’s only a small number of available tests. International officials fear the virus could quickly spread and overwhelm an already gutted health system.
For most people, the coronavirus causes mild or moderate symptoms, such as fever and cough. But for others, especially older adults and people with existing health problems, the virus can cause severe symptoms like pneumonia or death.
Particularly hard hit has been Iran, home to 80 million people. Iran’s state TV reported 141 new deaths Tuesday, pushing the death toll to 2,898. Health Ministry spokesman Kianoush Jahanpour said there are now 44,606 confirmed cases, including 3,703 in critical condition. Iran’s national flag waves as Milad telecommunications tower and buildings are seen in Tehran, Iran, Tuesday, March 31, 2020. In recent days, Iran which is battling the worst new coronavirus outbreak in the region, has ordered the closure of nonessential businesses and banned intercity travels aimed at preventing the virus’ spread. (AP Photo/Vahid Salemi)

In Saudi Arabia, King Salman said the government will pay for the treatment of all coronavirus patients, including visitors and foreign residents. Saudi Arabia has more than 1,500 confirmed cases of the virus and eight recorded deaths. It has sealed off three major cities and imposed a nighttime curfew across the country, as well as suspended flights and the yearlong Islamic pilgrimage to Mecca.
In Israel, the Defense Ministry said it had overseen the conversion of a missile-production facility into an assembly line for ventilators. The line, set up at a facility belonging to state-owned Israel Aerospace Industries, will produce ventilators made by Israeli company Inovytec. It produced its first 30 machines on Tuesday.
The Israeli military, meanwhile, announced that its chief of staff, Lt. Gen. Aviv Kochavi, had entered quarantine after learning that he attended a meeting last week with an officer who was infected. It said Kochavi, who has no symptoms, would remain in isolation until the weekend.
The army also said roughly 600 troops were being deployed to assist Israeli police in enforcing tight restrictions on movement Israel has recorded over 5,300 cases, with 20 deaths.
In Jerusalem’s Old City, workers sanitized the Western Wall, the holiest site where Jews can pray, to protect those who visit the site.
With the Passover holiday approaching next week, prayer notes tucked between the wall’s stones were removed using gloves and disposable wooden tools. The notes, which are removed twice a year, were collected in special bags and will be buried with other sacred papers.

Related Topics:GazaPalestiniansUnited Nations
Up Next

White House Projects 100K to 240K US Deaths From Virus