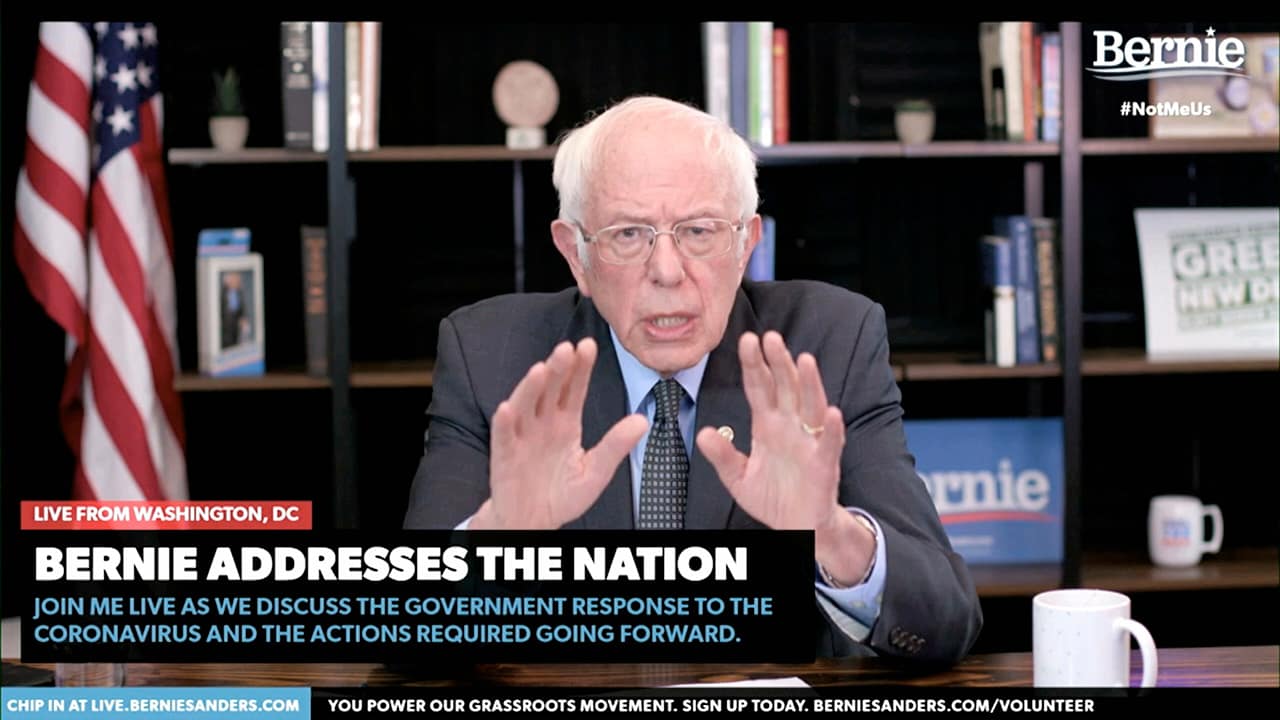 WASHINGTON — No more rallies. No more door-knocking. And no more in-person fundraisers, raking in dollars from dozens of millionaires at once.
The coronavirus has disrupted American life, and the 2020 presidential campaign is no exception. Amid calls for social distancing to stop the pandemic’s spread, President Donald Trump and Democrats Joe Biden and Bernie Sanders have had little choice but to call off large-scale public events in favor of politicking online and over the airwaves.

The Pause Has Provided Biden the Opportunity to Retool His Campaign

Since events halted earlier this month, Sanders has held a virtual rally featuring rocker Neil Young and appeared via livestream for a “fireside chat.” But any momentum he’s sought to build has been sapped, as Biden, the former vice president, has won a string of contests that put the nomination within his grasp.
Sanders’ campaign did not respond to a request for comment.
The pause has provided Biden the opportunity to retool his campaign, which was running on fumes before his massive win in South Carolina last month reset the race. But he lacks the robust digital operation that Sanders and Trump have. And his early experiments in online campaigning have had mixed results.
Biden aimed to appear presidential during a livestream Tuesday night, when he won primaries in Florida, Illinois and Arizona. Standing before a podium with an austere backdrop from his home state of Delaware, he called on the nation to put politics aside to fight the coronavirus because it “doesn’t care if you’re a Democrat or a Republican.”
Yet an earlier event was marred by technical glitches. At one point, Biden wandered off-camera. The campaign later apologized for the difficulties, and Rob Flaherty, Biden’s digital director, acknowledged livestream technology is “one of the things that we’re struggling with.”
“He’s the best retail politician in the entire world, right? So how do we build systems where he can go out and meet people, still talk to people, get those one-on-one engagements, and also make people feel like they’re a part of something?” Flaherty said.
The campaign is also looking into adopting the use of Slack, a popular group communication platform, now that staffers are working from home.
Trump, too, is not immune from the effects. Though the Republican has the megaphone of the presidency, his dismissive early response to the virus and denials that a pandemic was spreading have been largely panned. At the same time, he’s being denied the ability to hold the freewheeling rallies that are a staple of his presidency and that allow him to blow off steam, attack rivals and often shift the media narrative.
As campaign offices have emptied out and workers telecommute from home, trainings for his reelection effort are now being done virtually, as are all voter contacts.
Tim Murtaugh, the communications director for Trump’s reelection campaign, said the campaign is “best equipped” for the pivot to virtual campaigning. But no amount of technology can replicate the arena rallies that have served as mass organizing and communication events for his reelection.
Murtaugh said the campaign hopes to roll out “live and interactive” events with surrogates online in the coming days. Still, don’t expect to see Trump participating in them.
Murtaugh said that as Trump and Vice President Mike Pence hold televised briefings daily, the campaign’s role is to amplify their message.
“Americans want to see that their president and their government is on the case,” he said.
While Biden has called for the country to come together for a moment of bipartisanship to address the crisis, other Democrats are itching to use Trump’s handling of it as an election-year attack.
“Using Trump’s own words and actions to remind people of his failures while he tries to rewrite history is essential,” tweeted David Plouffe, Barack Obama’s former campaign manager.
So far, at least, a political committee affiliated with Trump’s reelection has opted against taking the same course. America First Action, a super PAC sanctioned by Trump, has postponed plans to spend millions attacking Biden in TV ads while the crisis in ongoing.
Another area of uncertainty is whether any of the contenders will still be able to rake in gobs of money, the lifeblood of any campaign.

Not Everyone Is Concerned, Though

With big-dollar events on hold, the candidates and the parties could struggle to bring in large checks. The financial uncertainty could also depress grassroots donations from those who give small amounts online.
“We have to be thoughtful about how we ask people for money,” Flaherty said. “We’re moving into a space where the economy is going to be tougher.”