NEW YORK — Overheard as the entertainment world stalled in response to the coronavirus outbreak: “What are we gonna do now, read books?

“We’re catching up on our reading. I just started `Love in the Time of Cholera.’ It seemed appropriate.” — Beverly Pfeiffer in Silver Spring, Maryland

That’s exactly what Pamela Milam will be doing, and lots of them.

Milam is a selection reader for the Women’s National Book Association, a nonprofit established in 1917 to support, well, reading. She and her colleagues began a marathon this month to make it through as many as 100 books each as they help develop the organization’s annual Great Group Reads list for National Reading Group Month in October.

She’s also an avid theater goer. She lives in the heart of Times Square and goes to the theater about once a week, but when Broadway and many other entertainments canceled, cut back seating or postponed performances last week, Milam knew exactly how she’d fill the extra time.

“I’m happy snug on my couch. I’ll do my best to make the most of that,” she said.

Many concert tours, awards shows, festivals, museums, sporting events and more have shut down to help “flatten the curve” as the virus spreads around the globe. Bans on big and medium-size gatherings are proliferating, prompting more people to hunker down at home.

“We’re catching up on our reading. I just started `Love in the Time of Cholera.’ It seemed appropriate,” said Beverly Pfeiffer in Silver Spring, Maryland, of the Gabriel Garcia Marquez classic that plays out amid an outbreak of the disease. 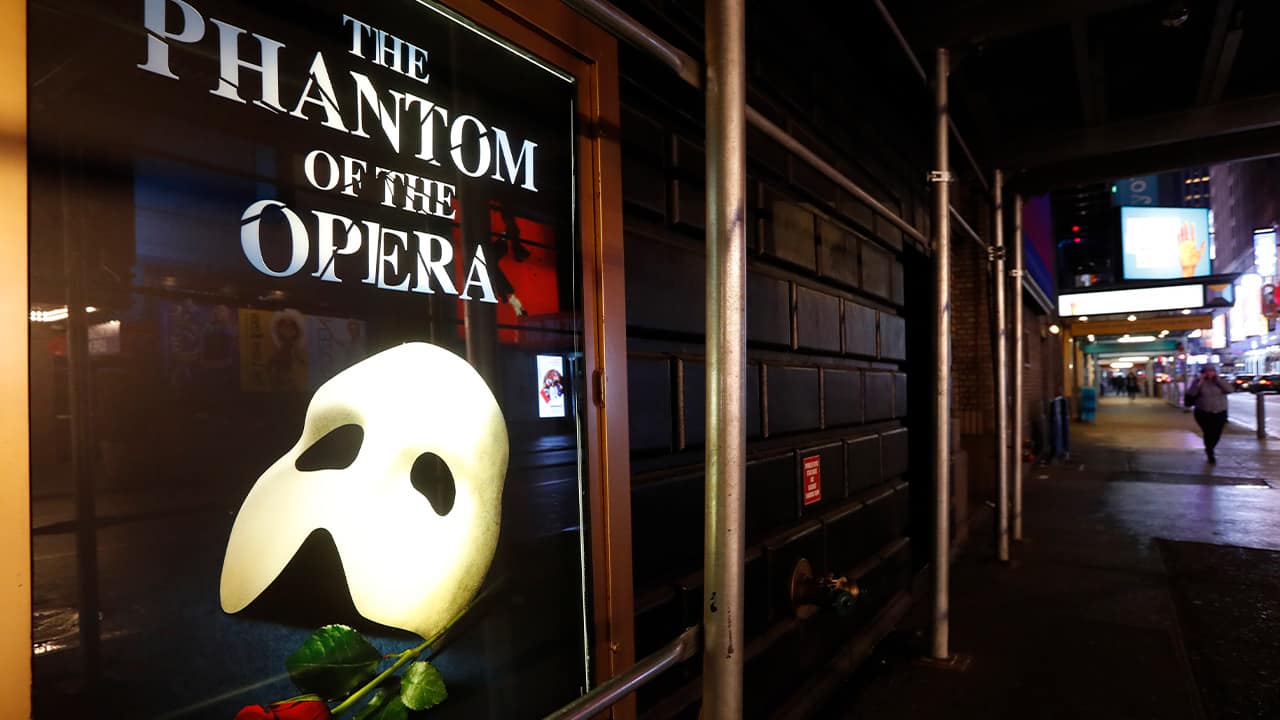 A poster advertising “The Phantom of the Opera” is shown on the shuttered Majestic Theatre on a nearly deserted side street near Times Square, Thursday, March 12, 2020, in New York, after New York Gov. Andrew Cuomo banned gatherings of more than 500 people amid a rise in coronavirus cases. The ban for Broadway theaters started Thursday and will be in effect through April 12, according to a statement from the Broadway League, an organization of theater owners and producers. (AP Photo/Kathy Willens)

Other people are working more, especially now that they’re doing it from home.

Some have upped their kitchen game by taking on fussy recipes and baking projects.

One company that offers online courses has seen a huge jump in business, as has another that sells digital photo scanning services.

Interior designer Genevieve Gorder, co-host of the Netflix series “Stay Here,” asked followers on Instagram to share home improvement goals that had been lingering at the bottom of to-do lists. Cleaning blinds, a basement sort-out and deck repairs are now on front burners.

Nicole Schaefer in Portland, Oregon, is usually out doing something. Now, she almost feels guilty about all the free time. Almost.

“I feel like now I have time to relax, if that makes sense. With my evenings freed up, I’m learning to make my own macarons. I’m making a present for my boyfriend. I’m knitting. I’m exercising as long as I want to. There’s so many things to do without concerts and plays and shows to go to,” she said.

There’s binge-watching galore, of course, and devotees of opera and art are being treated to special live streams and virtual tours. Museums have joined a social media movement started by the Museum of the City of New York to offer art and other imagery using the hashtag #MuseumMomentofZen.

Melanie Musson isn’t focused on any of that, and social distancing shouldn’t be a problem. She and her husband, along with their four children, love to spend time in the mountains surrounding their Belgrade, Montana, home.

“I have so many plans that I’m actually looking forward to being forced out of social gatherings. We plan to spend time outdoors camping, hiking and fishing. The sunshine and exercise will help us be as healthy as we can be.” — Melanie Musson of Belgrade, Montana

“I have so many plans that I’m actually looking forward to being forced out of social gatherings,” she said. “We plan to spend time outdoors camping, hiking and fishing. The sunshine and exercise will help us be as healthy as we can be.”

While Musson and others head outdoors, some folks who are shunning or shut out of their exercise classes are working out new routines at home.

Linda Johnson Mandell in Los Angeles is going another route with her giant white Labradoodle, Frankie Feldman. The 5-year-old fur ball is a therapy dog who routinely visits patients at care centers. With new restrictions, those visits are on hold.

“So instead we’re staying home, brushing up on obedience, and I’m teaching him some new tricks to amuse folks when the quarantines are lifted,” Mandell said.

Cynthia Shaw in Brooklyn is a classical pianist and piano teacher who regularly gathers with students and friends who play for each other. Since many in their group of eight or so are older, including some in their 80s, they’re giving up their monthly home gatherings for now, but played Sunday using a video conferencing platform instead.

“Some of the older members had a hard time figuring it out, but they did,” she said. “I had my computer set up next to the piano. I played the first movement of a Beethoven sonata. People played Chopin. There was some Gershwin. I think we’ll do it again.” 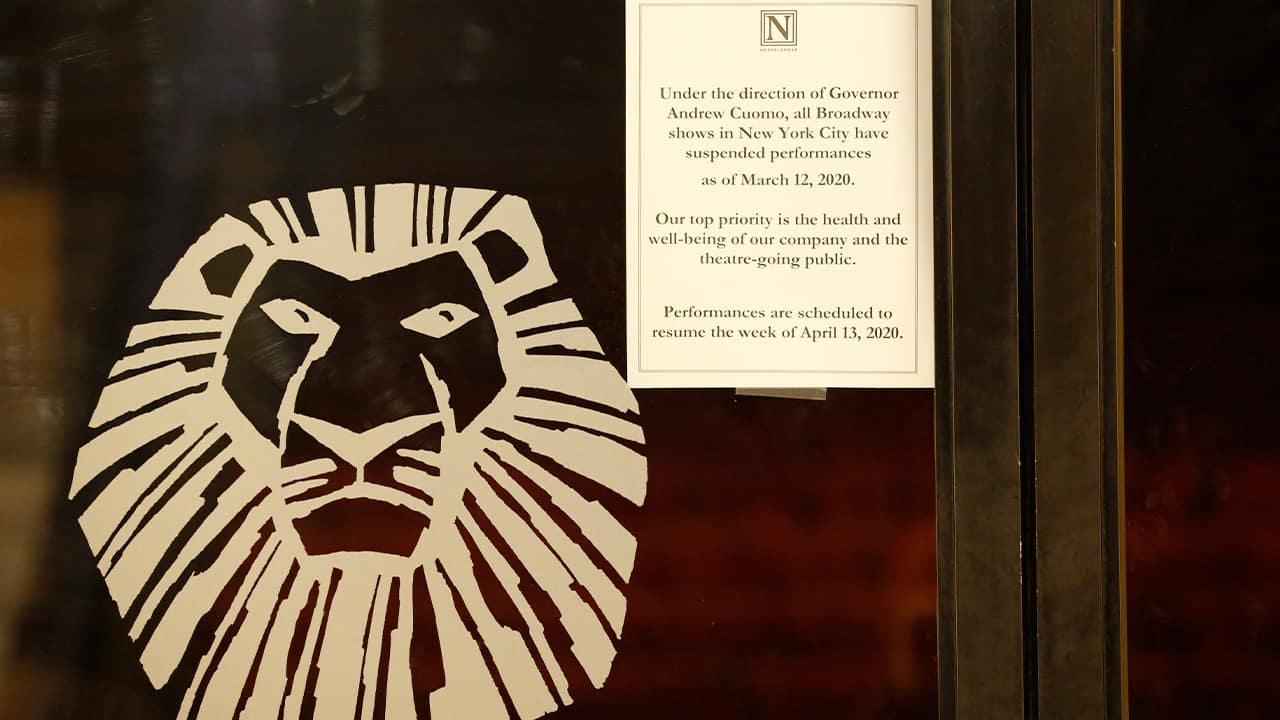 A sign announcing the suspension of all Broadway shows is posted on a door at the Minskoff Theatre, where “The Lion King” had been playing, Thursday, March 12, 2020, in New York. Gov. Andrew Cuomo banned gatherings of more than 500 people. (AP Photo/Kathy Willens)

For Most People, the New Coronavirus Causes Only Mild or Moderate Symptoms

Elsewhere, the TV binge is definitely on with some new gems on offer.

The Walt Disney Co. will release “Frozen 2” on Disney-Plus several months early to give families cooped up by the coronavirus a welcome distraction, and give its streaming service a boost.

For documentary lovers, Netflix is rolling out new features and series from acclaimed creators, including “The Innocence Files” by Liz Garbus, Alex Gibney and Roger Ross Williams; “Jeffrey Epstein: Filthy Rich” by Lisa Bryant and Joe Berlinger; and “David Attenborough: A Life on Our Planet.”

“We subscribe to nearly every streaming service, or so it seems. I’m hoping to find some gold in there,” said Julie Crislip in Pennington, New Jersey.

For most people, the new coronavirus causes only mild or moderate symptoms, such as fever and cough. For some, especially older adults and people with existing health problems, it can cause more severe illness, including pneumonia. The vast majority of people recover.

Psychotherapist Jeff Larsen in San Diego has a plan, for himself and his clients.

“It’s all about slowing down,” he said. “So absolutely pick up that book that’s been gathering dust, watch that movie or binge-watch that TV show that you haven’t had time to watch. Most importantly, it’s the mindset that we, as humans, need to have going into this time period. It’s always a good thing when we can slow down and simplify our lives.”