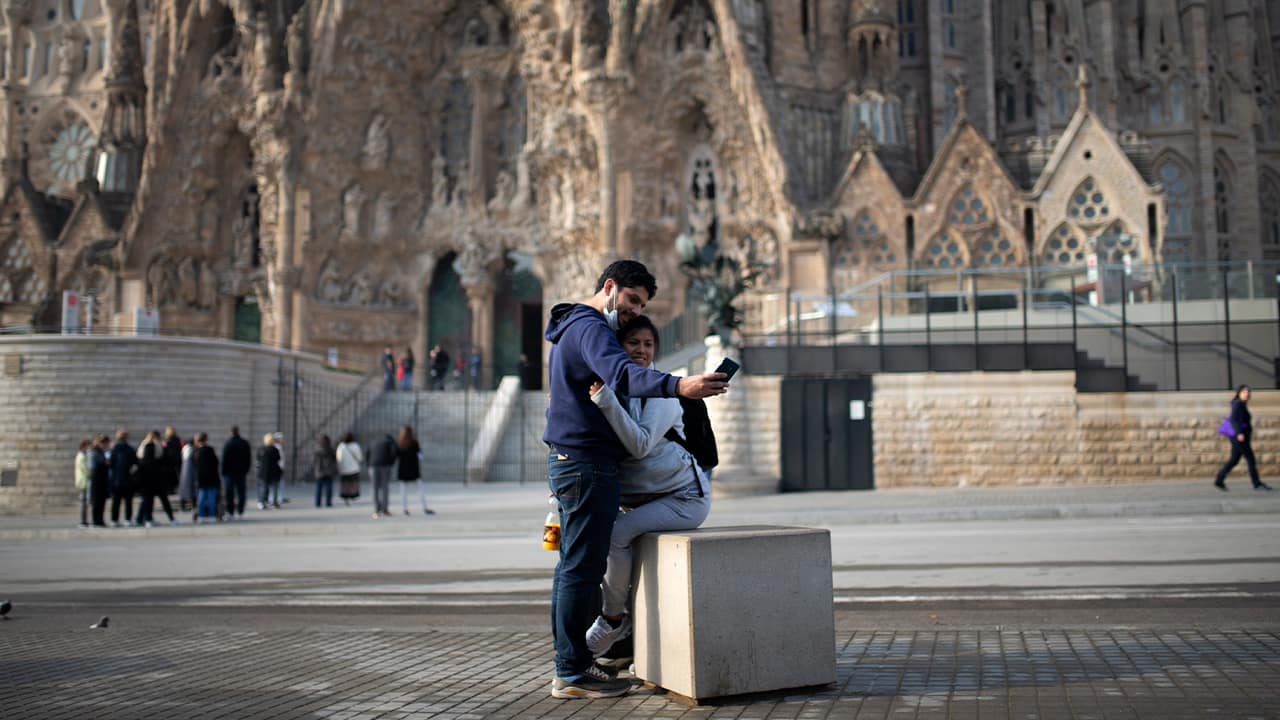 MADRID, Spain — Tens of millions of students stayed home on three continents, security forces went on standby to guard against large gatherings of people, and bars, restaurants and offices closed Friday to slow the spread of the coronavirus pandemic.
The virus edged ever closer to the world’s power centers, with positive tests for the Canadian prime minister’s wife, a top aide to Iran’s supreme leader, a Brazilian official who met with President Donald Trump, and an Australian Cabinet minister who met with U.S. Attorney General William Barr and Trump’s daughter, Ivanka.
Channeling wartime rhetoric and tactics in the face of a microscopic enemy, leaders appealed for solidarity to battle a threat that appeared to expand exponentially. They vowed to protect not just the sick, but those sacrificing their livelihoods and education for the greater good. But new border checks were also on the rise, showing that solidarity had its limits in the face of a fast-moving threat.
With promises of financial support from the European Commission, France and Germany, stocks clawed back some of their losses on Wall Street and in Europe a day after the market’s worst session in over three decades.
New infections were rising sharply in Spain, and the government put 60,000 people in four towns on a mandatory lockdown Friday — the nation’s first and Europe’s second after drastic nationwide measures in Italy. In Madrid, which is struggling with nearly 2,000 infections, many in nursing homes, the government was pooling intensive care units and considering offers by hotel chains to transform rooms into sick wards.
Spanish Prime Minister Pedro Sánchez announced a two-week state of emergency beginning Saturday and pledged to “mobilize all resources,” including military, to contain the country’s sharp rise in coronavirus cases.


Related Story: Young People Capitalize on Cheap Coronavirus Flights: 'If I Die, I ... Empty supermarket shelves in London, as people stock up due to the coronavirus, Friday, March 13, 2020. For most people, the new coronavirus causes only mild or moderate symptoms, such as fever and cough. For some, especially older adults and people with existing health problems, it can cause more severe illness, including pneumonia. (AP Photo/Kirsty Wigglesworth)

In Europe and the U.S., Leaders and Medical Experts Tried to Predict the Future

“Victory depends on each of us, in our home, in our family, at work, in our neighborhood. To be a hero also means washing your hands, staying at home and protecting oneself in order to protect everybody else,” he said in a televised message Friday. “It will take weeks. It will be very hard and difficult, but we are going to stop the virus.”


“Victory depends on each of us, in our home, in our family, at work, in our neighborhood. To be a hero also means washing your hands, staying at home and protecting oneself in order to protect everybody else. It will take weeks. It will be very hard and difficult, but we are going to stop the virus.” — Spanish Prime Minister Pedro Sánchez
In China, where new infections have tailed off, authorities mobilized to prevent a boomerang effect, quarantining new arrivals for 14 days. But the intensifying spread of COVID-19 beyond Asia dashed any hopes for containing the virus, despite drastic curbs on travel and social events.
In Europe and the United States, leaders and medical experts tried to predict the future — or at least the next few weeks — by scrutinizing the virus’ trajectory so far, especially in China and Italy, the epicenters of Asia and Europe. Congress and the Trump administration closed in on a sweeping aid package with sick pay, free testing and other resources to help reassure anxious Americans.
The Italian town of Codogno, which had all but shut down hours after recording Italy’s first locally spread coronavirus infection, showed that changing habits does make a difference. New infections have slowed drastically there compared to the rest of Italy, where draconian measures came far later.
“More than a sigh of relief, there was some concern over the risk that all of the sacrifices were in vain,” said Mayor Francesco Passerini, who like most in the town wears a mask.
The goal of all authorities is to slow the spread of the virus to avoid overwhelming hospitals with those sickened by an illness that no one in the world has immunity to. Worldwide, 137,000 people have been infected and more than 5,000 have died, but half of those who had the virus have already recovered. Most patients have only mild or moderate symptoms such as a fever or cold, but severe symptoms including pneumonia can occur, especially in the elderly and people with existing health problems.

New Travel Restrictions Sprang up Practically by the Hour on Friday

While Washington scrambled to shape an economic rescue package, European officials pushed back against Trump’s sharp restrictions on travel from Europe.
“Instead of tending to the problems of his country, and to a virus that knows no borders, he thinks that he can fight it like people that have a different citizenship than American,” said German Finance Minister Olaf Scholz, who is also Germany’s vice chancellor.
“But this is a virus, if I may say so, and it actually shows that solidarity is the only way that we can move forward as human beings,” he said.
But new travel restrictions sprang up practically by the hour on Friday: Switzerland, Sri Lanka, Portugal, the Czech Republic — all started barring entry to Europeans considered at risk. Canada and Denmark joined the United States in advising citizens to avoid trips abroad, and Americans in Europe caught increasingly rare trans-Atlantic flights back home.
Exchange student Orsan Emge was trying to return to San Diego from Madrid.
“It hasn’t been canceled yet, but it’s heading in that direction,” she said. “I want to get back to the United States before I have to be put in quarantine.”
The exponential spread of the virus in Europe, North America and the Middle East has drawn contrasts with waning outbreaks in the hardest-hit nations in Asia. China, where the virus emerged late last year, still accounts for more than 60% of global infections but on Friday reported just eight new cases and seven deaths. A woman looks at an empty bread aisle at a supermarket in Antwerp, Belgium, Friday, March 13, 2020. Belgium announced sweeping measures on Thursday, including the closure of all schools, restaurants and bars as well as cancelling sporting and cultural events, in an effort to curb the spread of the virus. For most people, the new coronavirus causes only mild or moderate symptoms, such as fever and cough. For some, especially older adults and people with existing health problems, it can cause more severe illness, including pneumonia. (AP Photo/Virginia Mayo)

The Pandemic’s New Epicenter Is Europe

The size of permitted gatherings dwindled sharply in country after country, state after state. French President Emmanuel Macron, who announced the indefinite closure of all schools late Thursday, praised the French for taking action.
“That is what makes a great nation: Women and men able to put the collective interest above all, a human community held together by values: Solidarity and fraternity,” he said.


“That is what makes a great nation: Women and men able to put the collective interest above all, a human community held together by values: Solidarity and fraternity.” — French President Emmanuel Macron
Chinese President Xi Jinping told the U.N. leader his nation was returning to normal and now wants to conduct joint research on drugs and vaccines and offer “as much assistance as it can” to countries in need. A Chinese medical crew arrived in Italy and surplus supplies were sent to Iran.
In South Korea, which had nearly 8,000 cases overall, Friday marked the first day recoveries outnumbered new infections since the country’s first patient was confirmed Jan. 20.
The pandemic’s new epicenter is Europe. Italy’s death toll topped 1,000 with more than 15,000 confirmed cases. France, Spain and Germany all exceeded 2,000 cases each. Panic buying was seen around the continent.
In Italy’s hardest-hit Lombardy region, hospitals were overflowing with both the sick and the dead. The country’s restaurants, cafes and retail shops closed. Grocery stores, pharmacies and markets were allowed to operate, with orderly lines of evenly spaced customers forming outside to avoid crowds inside.
The U.S. Defense Department closed all schools on continental European military facilities, affecting tens of thousands of students.
In Iran, which exceeds 10,000 cases and 400 deaths, Foreign Minister Mohammad Javad Zarif urged the Trump administration to immediately lift sanctions over the country’s nuclear program. He said they made it difficult to import medicine and medical equipment.

State-run TV reported a positive test and home quarantine for Ali Akbar Velayati, a trusted adviser to Supreme Leader Ayatollah Ali Khamenei, the 80-year-old leader of the Islamic Republic. Iran’s senior vice president, Cabinet ministers, members of parliament, Revolutionary Guard members and Health Ministry officials are also infected.
Canadian Prime Minister Justin Trudeau was isolating himself after his wife tested positive. The Australian home affairs minister was hospitalized in isolation after testing positive. He returned home on Sunday from Washington, D.C., where he met with U.S. Attorney-General William Barr, Trump’s daughter, Ivanka and Sen. Lindsey Graham, who has self-quarantined after also having contact with a Brazilian official who tested positive.
Despite also meeting with that Brazilian official at Mar-a-Lago, Trump has no immediate plans to be tested or to self-quarantine, the White House said. Trump did, however, halt his trademark political rallies, following the lead of Democratic rivals Joe Biden and Bernie Sanders.
Across the U.S., where cases have topped 1,700, a sense of urgency was pervasive. Professional athletes and entertainers were among those infected.
Schools emptied of students and workplace cubicles went vacant. Crowded gatherings were restricted from New York to California. Disneyland and Disney World were to close in coming days. And sports fans could not even cheer their favorite teams from the safety of their living rooms since professional basketball, baseball, hockey, soccer and other leagues canceled and postponed games.
Yet decisions still loomed for the biggest athletic competition of them all — the 2020 Summer Olympics — which was still firmly on the calendar. The International Olympic Committee and the Tokyo organizing committee were not considering canceling or delaying the games, “absolutely not at all,” said Japan Olympics minister Seiko Hashimoto.

Who Canceled: A Look at the Concerts, Films, Events on Hold