WASHINGTON — Elizabeth Warren, who electrified progressives with her “plan for everything” and strong message of economic populism, dropped out of the Democratic presidential race on Thursday, according to a person familiar with her plans. The exit came days after the onetime front-runner couldn’t win a single Super Tuesday state, not even her own.

Warren never finished higher than third in the first four states and was routed on Super Tuesday, failing to win any of the 14 states voting and placing an embarrassing third in Massachusetts, behind Biden and Sanders.

The Massachusetts senator has spoken with Bernie Sanders and Joe Biden, the leading candidates in the race, according to their campaigns. She is assessing who would best uphold her agenda, according to another person who requested anonymity to discuss private conversations.

Warren’s exit all but extinguished hopes that Democrats would get another try at putting a female nominee up against President Donald Trump.

For much of the past year, her campaign had all the markers of success, robust poll numbers, impressive fundraising and a sprawling political infrastructure that featured staffers on the ground across the country. She was squeezed out, though, by Vermont Sen. Bernie Sanders, who had an immovable base of voters she needed to advance.

Warren never finished higher than third in the first four states and was routed on Super Tuesday, failing to win any of the 14 states voting and placing an embarrassing third in Massachusetts, behind Biden and Sanders.

Her exit from the race following Sen. Amy Klobuchar’s departure leaves the Democratic field with just one female candidate: Hawaii Rep. Tulsi Gabbard, who has collected only one delegate toward the nomination. It was an unexpected twist for a party that had used the votes and energy of women to retake control of the House, primarily with female candidates, just two years ago.

Her Candidacy Appeared Seriously Damaged Almost Before It Started

Warren’s campaign began with enormous promise that she could carry that momentum into the presidential race. Last summer, she drew tens of thousands of supporters to Manhattan’s Washington Square Park, a scene that was repeated in places like Washington state and Minnesota.

She had a compelling message, calling for “structural change” to the American political system to reorder the nation’s economy in the name of fairness. She had a signature populist proposal for a 2% wealth tax she wanted to impose on households worth more than $50 million that prompted chants of “Two cents! Two cents!” at rallies across the country.

Warren, 70, began her White House bid polling near the back of an impossibly crowded field, used wonky policy prowess to rocket to front-runner status by the fall, then saw her support evaporate almost as quickly.

Her candidacy appeared seriously damaged almost before it started after she released a DNA test in response to goading by Trump to prove she had Native American ancestry. Instead of quieting critics who had questioned her claims, however, the test offended many tribal leaders who rejected undergoing the genetic test as culturally insensitive, and it didn’t stop Trump and other Republicans from gleefully deriding her as “Pocahontas.”

Warren also lost her finance director over her refusal to attend large fundraisers, long considered the financial life blood of national campaigns. Still, she distinguished herself by releasing dozens of detailed proposals on all sorts of policies from cancelling college debt to protecting oceans to containing the coronavirus. Warren also was able to build an impressive campaign war chest relying on mostly small donations that poured in from across the country — erasing the deficit created by refusing to court big, traditional donors. 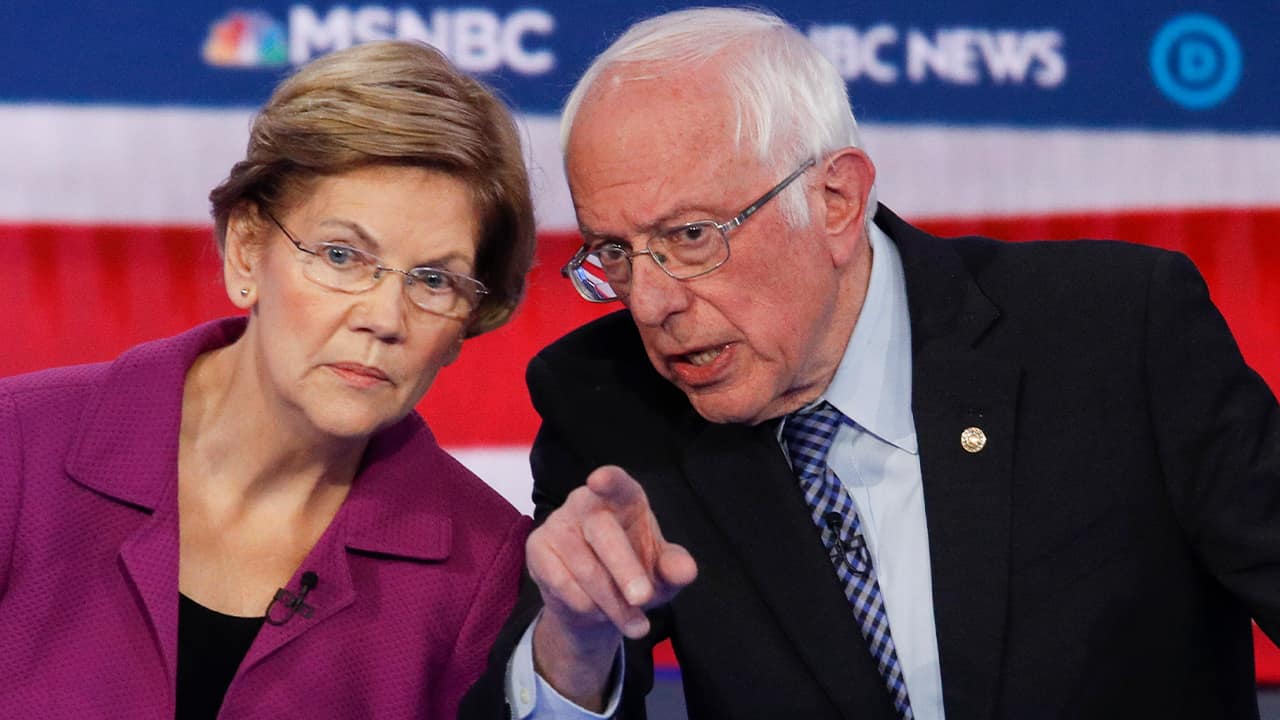 As her polling began improving through the summer. Warren appeared to further hit her stride as she hammered the idea that more moderate Democratic candidates, including Biden, weren’t ambitious enough to roll back Trump’s policies and were too reliant on political consultants and fickle polling. And she drew strength in the #MeToo era, especially after a wave of female candidates helped Democrats take control of the U.S. House in 2018.

Warren’s poll numbers began to slip after a series of debates when she repeatedly refused to answer direct questions about if she’d have to raise taxes on the middle class to pay for Medicare for All.

But Warren couldn’t consolidate the support of the Democratic Party’s most liberal wing against the race’s other top progressive, Sanders. Both supported universal, government-sponsored health care under a “Medicare for All” program, tuition-free public college and aggressive climate change fighting measures as part of the “Green New Deal” while forgoing big fundraisers in favor of small donations fueled by the internet.

Warren’s poll numbers began to slip after a series of debates when she repeatedly refused to answer direct questions about if she’d have to raise taxes on the middle class to pay for Medicare for All. Her top advisers were slow to catch on that not providing more details looked to voters like a major oversight for a candidate who proudly had so many other policy plans.

When Warren finally moved to correct the problem, her support eroded further. She moved away from a full endorsement of Medicare for All, announcing that she’d work with Congress to transition the country to the program over three years. In the meantime, she said, many Americans could “choose” to remain with their current, private health insurance plans, which most people have through their employers. Biden and other rivals pounced, calling Warren a flip-flopper, and her standing with progressives sagged.

Sanders, meanwhile, wasted little time capitalizing on the contrast by boasting that he would ship a full Medicare for All program for congressional approval during his first week in the White House. After long avoiding direct conflict, Warren and Sanders clashed in January after she said Sanders had suggested during a private meeting in 2018 that a woman couldn’t win the White House. Sanders denied that, and Warren refused to shake his outstretched hand after a debate in Iowa.

Leaning hard into the gender issue only saw Warren’s support sink further heading into Iowa’s leadoff caucus, however. But even as her momentum was slipping away, Warren still boasted impressive campaign infrastructure in that state and well beyond. Her army of volunteers and staffers looked so formidable that even other presidential candidates were envious.

Just before Iowa, her campaign released a memo detailing its 1,000-plus staffers nationwide and pledging a long-haul strategy that would lead to victories in the primary and the general election. Bracing for a poor finish in New Hampshire, her campaign issued another memo again urging supporters to stay focus on the long game — but also expressly spelling out the weaknesses of Sanders, Biden and Pete Buttigieg, the former mayor of South Bend, Indiana, in ways the senator herself rarely did.

Warren got a foil for all of her opposition to powerful billionaires when former New York Mayor Mike Bloomberg entered the race. During a debate in Las Vegas just before Nevada’s caucus, Warren hammered Bloomberg and the mayor’s lackluster response touched off events that ended with him leaving the race on Wednesday.

For Warren, that led to a sharp rise in fundraising, but didn’t translate to electoral success. She tried to stress her ability to unite the fractured Democratic party, but that message fell flat. 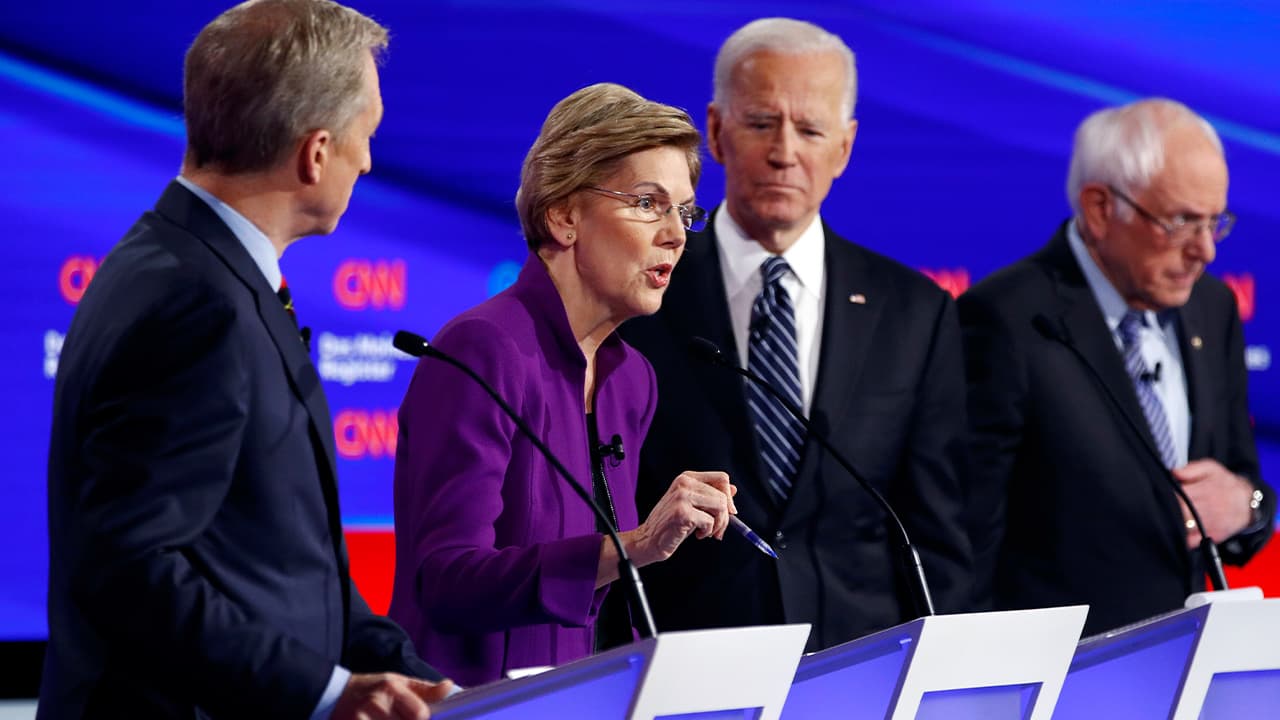 The Longer Warren Stayed in the Race, the More Questions She Faced

By South Carolina, an outside political group began pouring more than $11 million into TV advertising on Warren’s behalf, forcing her to say that, although she rejected super PACs, she’d accept their help as long as other candidates did. Her campaign shifted strategy again, saying it was betting on a contested convention.

Still the longer Warren stayed in the race, the more questions she faced about why she was doing so with little hope of winning — and she started to sound like a candidate who was slowly coming to terms with that.

“I’m not somebody who has been looking at myself in the mirror since I was 12 years old saying, ‘You should run for president,’” Warren said aboard her campaign bus on the eve of the New Hampshire primary, previewing a ceasing of campaigning that wasn’t yet official. “I started running for office later than anyone who is in this, so it was never about the office — it was about what we could do to repair our economy, what we could do to mend a democracy that’s being pulled apart. That’s what I want to see happen, and I just want to see it happen.”

She vowed to fight on saying, “I cannot say, for all those little girls, this got hard and I quit. My job is to persist.”

But even that seemed impossible after a Super Tuesday drubbing that included her home state.