LOS ANGELES — Joe Biden strode confidently to the podium, shutters clicking, a bank of cameras beaming to a national audience.

The former vice president has found his stride and his voice as he becomes a front-runner for the Democratic presidential nomination.

Gone is the sometimes mumbling, almost wistful 77-year-old, standing before small Iowa crowds full of voters lamenting the state of the union. “What in God’s name is happening?” he’d ask, after deviating from anything approaching prepared remarks.

Instead, there’s a confident candidate, jabbing at Bernie Sanders, his chief rival for the Democratic nomination, yet reserving his biggest swings for the Republican president he hopes to topple in the fall. “If we give this man another four years in the White House, he will forever and fundamentally change the character of this nation,” Biden said Wednesday.

But Biden also tries to seem above the trenches, promising to unify a fractious Democratic Party and a general electorate roiled by Donald Trump’s presidency.

It’s part scrappy Joey Biden, the kid from Scranton, Pennsylvania, who learned to navigate a severe stutter but still talks of the searing humiliation. It’s part Delaware senator, the deal-maker promising to replace Washington churlishness with comity, dignity and diplomacy. It’s part two-term vice president, the national officeholder who believes “with every fiber of my being” that he can return in the top spot this time and “heal the nation.” And it’s part devoted husband and father, wearing personal loss as public grief.

Of course, Biden’s Super Tuesday surge was aided in part by the unceremonious fall of billionaire Mike Bloomberg, who entered the race because Biden appeared headed toward an uninspiring finish. Similarly, he benefited from party moderates’ fears about Sanders, whose democratic socialist identity mainstream Democrats see as a November albatross. That was enough for two competitors, Amy Klobuchar and Pete Buttigieg, to drop out and endorse Biden, with former candidate Beto O’Rourke making it an endorsement trifecta on Super Tuesday eve.

Nonetheless, the former vice president put himself in position to take advantage of those dominoes, tapping personal and political strengths and muting at least some of his weaknesses to make a comeback unparalleled in modern presidential campaigns.

Those close to him describe a candidate and campaign jolted into abandoning a “Rose Garden” campaign — the kind of effort an incumbent president might run by using the trappings of the office — that had come off as cautious and, worse, presumptuous.

“It was very vice presidential … cautious,” said another campaign chair, Eric Garcetti. The Los Angeles mayor recalled giving Biden some tough encouragement after he finished fourth in Iowa. “I said, ‘Just be you. Get rid of the ropes, the handlers, go be Joe,’” Garcetti recalled, and “’start talking about the future more than the past.’” 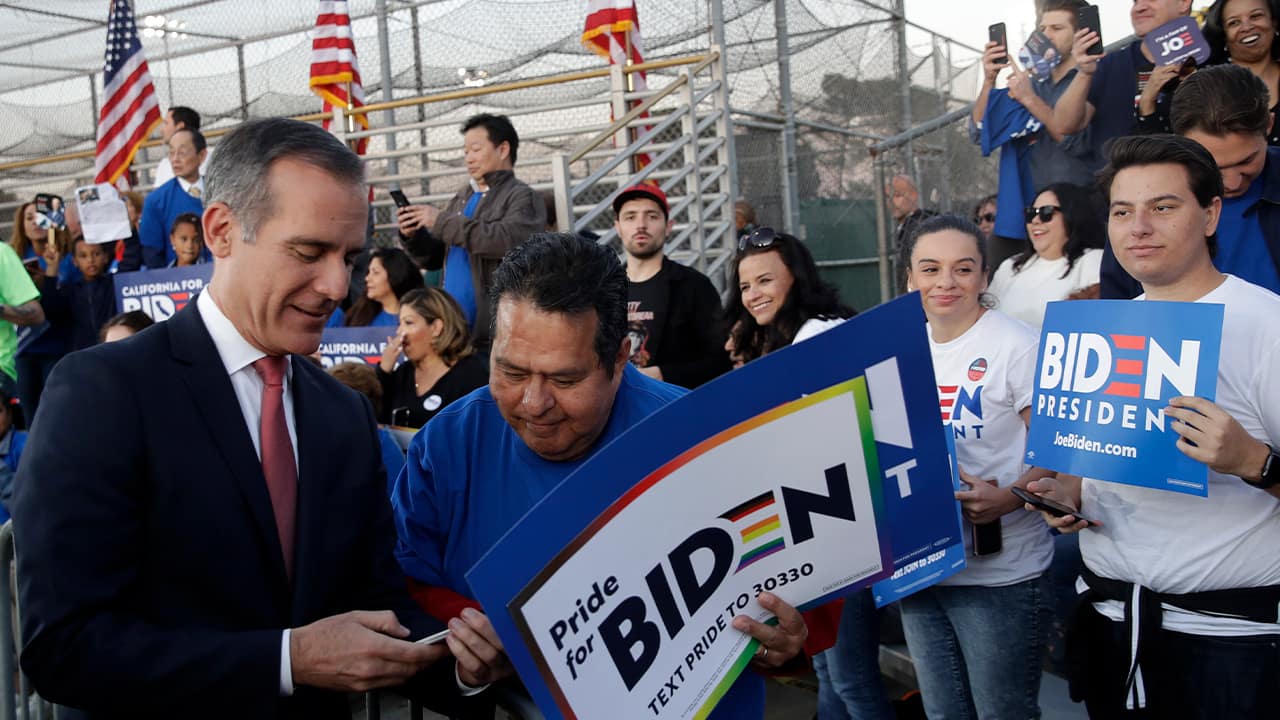 ‘We Will Beat the NRA’

It wouldn’t happen in New Hampshire, where Biden acknowledged in a debate that he’d probably “take a hit here, too.” He did, finishing fifth. But then the race turned to Nevada and South Carolina. The former vice president always had been comfortable in front of working-class audiences and with African Americans and Latinos.

In Nevada, he relished “back of the house” tours at casinos up and down the Las Vegas Strip. He was the only candidate at the Clark County party dinner to thank the workers who made the event happen, and the only one to mention the worst gun massacre in modern American history that had occurred just 1,000 feet away in 2017.

“We will beat the NRA,” he roared.

He finished a distant second. But it was enough to keep his “firewall” intact in South Carolina, where his decades of long relationships with political figures — black and white — and his service as Barack Obama’s vice president yielded a deep reserve of goodwill.

“He was sort of our third senator,” said South Carolina Democrat Boyd Brown.

That was exactly his welcome at Scott’s barbecue, a small but famous joint in Hemingway, South Carolina. Days before his primary romp, Biden bounded into the restaurant as customer and solicitor. He wanted sandwiches for the staff and votes for himself. It was a smaller gathering than those endless Iowa town halls, but more energy than he typically found in the first caucus state.

More of the recommendations Garcetti and others gave him came through as he campaigned for seven days straight in South Carolina, and then three more before his Super Tuesday celebration. “People need to believe in their politicians,” Garcetti said. “I said to him: ‘Don’t assume everybody knows your story.’”

Biden tapped that advice in a CNN town hall in an exchange with the Rev. Anthony Thompson, whose wife, Myra, was killed in the 2015 gun massacre at Mother Emanuel church in Charleston. Thompson asked Biden about his faith.

“I kind of know what it’s like to lose family,” Biden said, recalling both the 1972 car wreck that killed his first wife and young daughter, and then the death of his adult son Beau to cancer during his second term as vice president.

“I don’t know how you’ve dealt with it, Reverend,” Biden continued. “I’ve only been able to deal with it by realizing they’re part of my being” and because faith “gives me some reason to have hope and purpose.”

The devoted father showed himself again days later in Dallas, where Buttigieg came to campaign with and endorse his former rival, twice his age. Biden heaped praise upon the 38-year-old Buttigieg, saying the military veteran “reminds me of Beau,” a note the former vice president said is his “highest compliment.”

A week later, he was in Selma, Alabama, to commemorate the Voting Rights March and Bloody Sunday of 55 years prior. He was greeted with a standing ovation and sat on the dais alongside the ministers, while Bloomberg sat below on a pew and Sanders wasn’t in attendance at all — a metaphorical preview of the Super Tuesday returns that showed Biden winning clear majorities of black voters in state after state.

“We know Joe, and more importantly, Joe knows us,” said Rep. Jim Clyburn, the South Carolina Democrat, when he endorsed his longtime friend.

Those moments on the campaign trail counter the litany of other instances that Biden would prefer to forget — his misspeaking, the factual errors, sometimes growing testy with reporters or occasionally even voters — and that circulate online, often courtesy of aggressive Republican Party operatives. There are still plenty of “here’s the deal” and “look, folks,” and “not a joke,” the verbal crutches Biden won’t ever escape. And Biden’s aides and top supporters know there are likely more fumbles to come, more that Republicans will exploit.

Yet now they have a candidate who doesn’t just believe in his own case. He’s got results to show voters are starting to believe it, too.