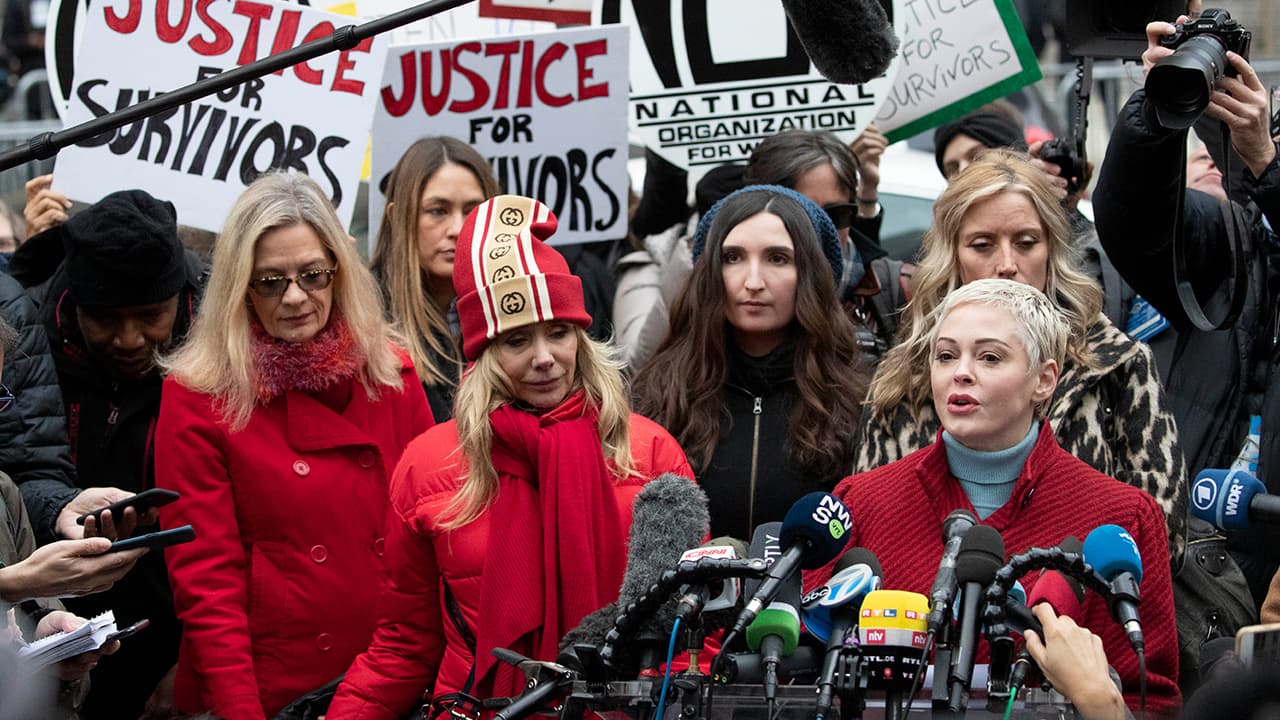 NEW YORK — Actress Mira Sorvino broke down in tears as she described her reaction to the guilty verdict against Harvey Weinstein: relief, that the fallen movie mogul would not go unpunished. A tinge of disappointment, that he was acquitted of the most serious charges, two counts of predatory sexual assault. But most of all gratitude, to the six accusers who were brave enough to testify — and the jurors who believed them.


“Harvey Weinstein has haunted many of our lives, even our nightmares, long after he initially did what he did to each one of us. We’ve finally taken that power back, we have exposed his evil.” — actress Mira Sorvino

“Harvey Weinstein has haunted many of our lives, even our nightmares, long after he initially did what he did to each one of us,” Sorvino said shortly after Monday’s verdict, in an emotional phone call with reporters and fellow accusers. “We’ve finally taken that power back, we have exposed his evil,” she said, her voice breaking.
“He will rot in jail as he deserves, and we will begin to have some closure,” she said.
For accuser Zoe Brock, the relief was palpable: She’d “expected the worst,” she said from New Zealand, “because for sexual assault victims, the worst keeps happening.” Brock said she’d feared Weinstein would not only be totally acquitted, but that he’d “make a comeback and he’d go to the Oscars and win again.”
“But that’s not gonna happen,” Brock said, “because now Harvey Weinstein is a convicted rapist, and right now he’s sitting in … jail, and I’m so happy about it.”
In what was unquestionably a landmark moment for the #MeToo movement, Weinstein was convicted of raping an aspiring actress in 2013 and sexually assaulting another woman in 2006, but found not guilty of predatory sexual assault, a charge that could have resulted in a life sentence. The most damaging conviction carries a maximum sentence of 25 years. Weinstein’s attorneys vowed to appeal; he has maintained that any sex was consensual. Women Are Finally Being Believed in Their Claims of Sexual Assault

For most of the accusers, the most powerful image — captured in courtroom sketches — was of the once all-powerful producer being led away in handcuffs.
“For once he won’t be sitting comfortably,” said actress Rose McGowan, one of Weinstein’s earliest accusers. “For once, he will know what’s its like to have power wrapped around his neck.”
McGowan called the verdict “a huge step forward in collective healing.”
“Every one of us who’s come forward, we have a name, we have a history, we have a life,” McGowan said. “We are more than Weinstein. But today because of the brave women who bared their deepest hurts for the world to see, he’s on Rikers Island.”
While Weinstein had been expected to go to the jail at Rikers Island, he was being held Monday evening in a locked unit at Bellevue hospital. He recently had back surgery, and his lawyers have said he needs medical attention.
A number of accusers said the day’s biggest triumph was that women were finally being believed in their claims of sexual assault.
“I have a renewed sense of faith that women will be believed when they come forward,” said Caitlin Dulany. “We were really hoping to change the world with this, and today is a good indication that we are on that road.
“It’s like the sky is blue again,” she said.

Many spoke of the need to shore up laws governing sex crimes. Among them was actress Rosanna Arquette.