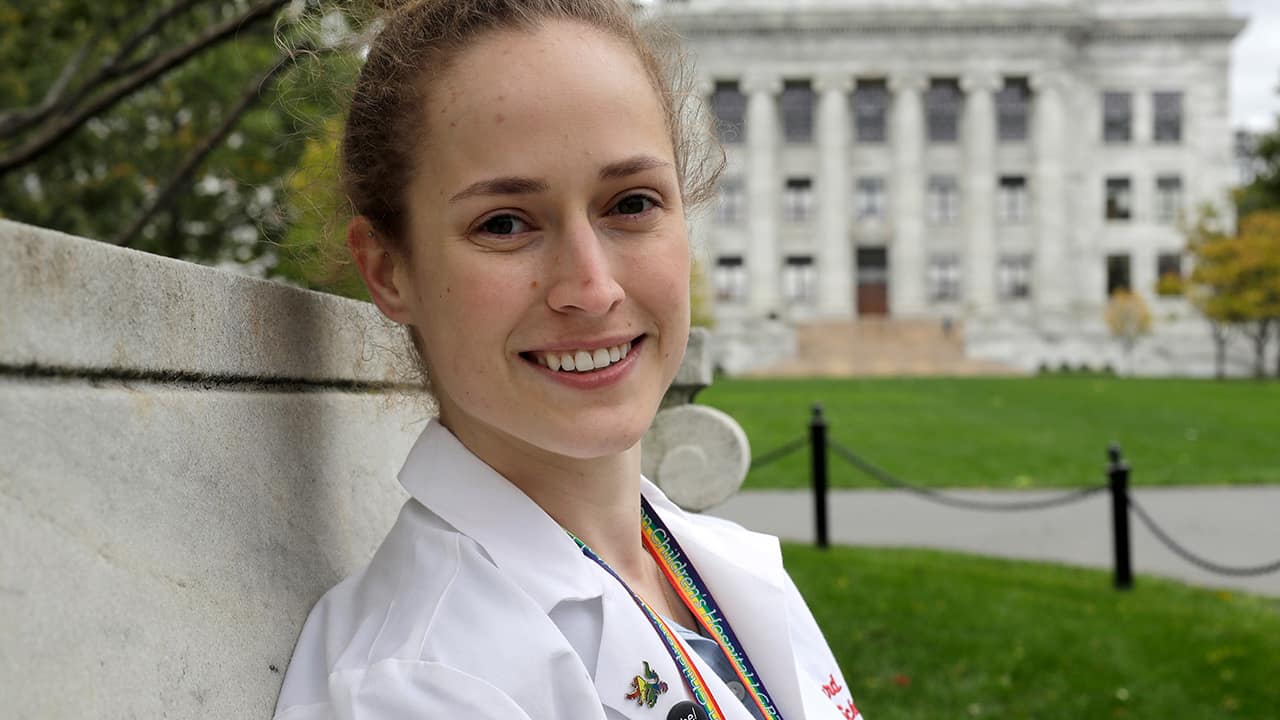 Aliya Feroe recalls the flustered OB-GYN who referred her to another physician after learning she identified as queer. For Rhi Ledgerwood, who was designated female at birth, identifies as trans and doesn’t have sex with men, it was a doctor advising about condoms and pregnancy prevention. For Tim Keyes, who came out as gay at age 17, it’s when doctors automatically assumed he sleeps with women.

This Past Fall, Harvard’s Entering Class of Medical Students Was 15% LGBTQ

Increasing LGBTQ enrollment and training in LGBTQ health issues in medical schools can help achieve those goals, advocates say.
Exact numbers of LGBTQ medical students and doctors are unknown. In 2018, the AMA added sexual orientation and gender identity as an option for members to include in demographic profiles the group compiles. Of the 15,000 doctors and students who have volunteered that information so far, about 4% identify as LGBTQ. That’s similar to Gallup estimates for the general U.S. population, although LGBTQ advocates believe the numbers are higher and rising as more people are willing to “out” themselves.
This past fall, Harvard’s entering class of medical students was 15% LGBTQ, a milestone that is no accident.
The American Association of Medical College’ primary application used by U.S. schools began offering prospective students the option of specifying gender identity and preferred pronouns in 2018. Harvard’s school-specific application allows applicants to identify as lesbian, gay, bisexual, transgender or queer. A response is not required, but the option “sends a message that you’re wanted,” said Jessica Halem, the medical school’s LGBTQ outreach director.
“We know that doctors need to look like and be a part of the communities they serve,” Halem said.

In this Thursday, Oct. 17, 2019 photo Harvard Medical School student Aliya Feroe, of Minneapolis, Minn., displays a button resembling a Harvard School of Medicine coat of arms lion, in rainbow colors that symbolize LGBTQ pride, left, and a button featuring pronouns, center, on the lapel of her lab coat on the school’s campus, in Boston. The pronoun button is meant to show support for preferred gender pronouns. Some medical schools are making a big push to recruit LGBTQ medical students, backed by research showing that patients often get better care when treated by doctors who are more like them. (AP Photo/Steven Senne)

Harvard Has an Active LGBTQ Student Group on Campus

“We have gay Muslim students. Lesbians from China. Students who are survivors of conversion therapy,” she said. “They are now out and very proud gay people and they are healing those wounds.”


“We have gay Muslim students. Lesbians from China. Students who are survivors of conversion therapy. They are now out and very proud gay people and they are healing those wounds.” — Jessica Halem, the medical school’s LGBTQ outreach director
Feroe had intended to present herself as straight in medical school, fearing doing otherwise would be off-putting for patients and make her feel like an anomaly among her peers.
But Harvard has an active LGBTQ student group on campus, faculty members who ask students if they prefer being called her, him or they, and coursework addressing LGBTQ medical care. Halem said that includes what screening tests are needed for women who have sex with transgender men, the hormone treatments to prescribe for transgender patients, and what it means when someone identifies as pansexual.
Feroe said she was “blown away” during a recent surgery rotation at one of Harvard’s affiliated hospitals, where a few patients were accompanied by same-sex partners. The doctors she was training with “smoothly asked about people’s lives” and were completely comfortable “when learning patients were queer,” she said, important steps toward offering non-judgmental “patient-centered” care.
A 2017-18 Association of American Medical Colleges report found that while most schools include some LGBTQ coursework, half reported three or fewer lectures, group discussions or other learning activities.
And a study of medical residents published last March found a widespread lack of knowledge on LGBTQ health issues. Dr. Carl Streed, the lead author and an associate professor at Boston University’s medical school, is among advocates pushing for a standardized, mandatory LGBTQ curriculum to fill the gaps.

LGBTQ Health Care Topics Are Woven Into the Curriculum in Classes

Streed said a harrowing doctor’s visit nearly 15 years ago when he had symptoms of a cold and swollen lymph nodes motivated him to pursue a medical career.
“When I explained I was a gay man, the physician became very brusque, suggested HIV testing, left the room and never came back,” recalled Streed, who was an undergraduate at the time.
Testing elsewhere showed Streed did not have HIV, but no one suggested tests for illnesses more common among college students, including mononucleosis, and he never received a diagnosis.
Physicians’ personal beliefs should not “determine the quality of care and compassion that is delivered to patients,” he said.
Rhi Ledgerwood entered the University of Louisville medical school in 2014, the year it became the pilot site for coursework and training in LGBTQ health issues based on guidelines from the Association of American Medical Colleges.
At Louisville, LGBTQ health care topics are woven into the curriculum in classes that explore issues such as gender-affirming hormone therapy, taught along with more traditional coursework.
Ledgerwood, now a medical resident in pediatrics, remembers feedback from classmates “who felt it didn’t apply to them or their future practices. It went against their beliefs and they didn’t feel like they should be wasting their time on this subject.”

‘I Was Expecting the Community to Be a Little Bit Different’

They were politely told the curriculum was here to stay, and Louisville now serves as a model for other medical schools.

Related Topics:LBGTQmedical students
Up Next

Full Transcript of Newsom's 2020 State of the Address