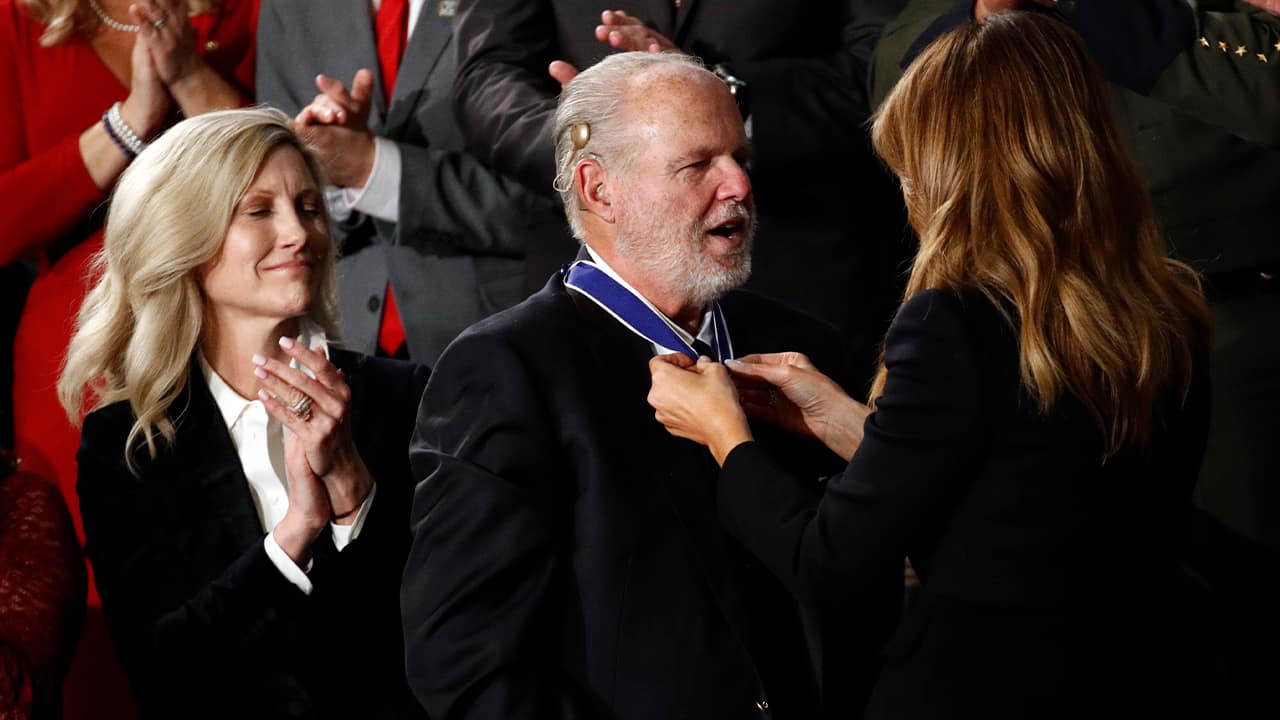 ‘America’s Still Not Ready to Elect a Gay Guy’

Buttigieg, 38, is the former mayor of South Bend, Indiana, and has been married to his husband, Chasten, since 2018. Buttigieg was a U.S. Navy intelligence officer in Afghanistan, is a Harvard graduate and was a Rhodes scholar at Oxford University in England.
Limbaugh said he envisioned Democrats concluding that “despite all the great wokeness and despite all the great ground that’s been covered, that America’s still not ready to elect a gay guy kissing his husband on the debate stage president.”
Former Vice President Joe Biden, who is challenging Buttigieg for the Democratic presidential nomination, assailed Limbaugh on ABC’s “The View.”
“I mean, my God,” said Biden, who called it “part of the depravity of this administration.” He added, “Pete and I are competitors, but this guy has honor, he has courage, he is smart as hell.”
Trump, asked if Americans would vote for a gay man to be president, responded, “I think so.”
Still, Trump added: “I think there would be some that wouldn’t. I wouldn’t be among that group, to be honest with you.” Trump spoke during an interview with Geraldo Rivera on Cleveland’s Newsradio WTAM. Some Republicans Said They Disagreed With Limbaugh’s Remark

Some Capitol Hill Republicans said they disagreed with Limbaugh’s remark, while others demurred.
“I’m just going to leave all that alone,” said conservative Sen. Marsha Blackburn, R-Tenn., who said she’d not heard the comment. Sen. Joni Ernst, R-Iowa, facing reelection this fall, also declined to comment.
“It’s a miscalculation as to where the country is at,” Sen. Lindsey Graham, R-S.C., a strong Trump supporter, told The Associated Press about Limbaugh’s words. “I think the country is not going to disqualify somebody because of their sexual orientation.”
Asked if Limbaugh should retain the Presidential Medal of Freedom, which Trump bestowed last week during his State of the Union address, Graham said, “Well, my God. Free speech still exists.“
Sen. Rob Portman, R-Ohio, said of Limbaugh, “He may disagree, as I do, with their policy positions, but the question is what their qualifications are, not other issues.” Portman announced his support for gay marriage in 2013 as he revealed that his son Will is gay.
Sen. Lamar Alexander, R-Tenn., a moderate who is retiring in January, initially said he wasn’t familiar with Limbaugh’s remarks and declined to comment. His spokesman later emailed an Alexander statement that said: “There may be reasons not to vote for Mayor Buttigieg, but that’s not one of them. This is a tolerant country.”

Buttigieg Has Also Framed His Sexuality in Religious Terms

A Buttigieg campaign spokesman declined to comment.
But the candidate has addressed criticism over his sexuality before. During a Des Moines, Iowa, rally in 2019, an audience member asked what he should tell his friends who say America isn’t ready for a gay president. Buttigieg replied, “Tell your friends I said ‘hi.’”