WASHINGTON — After the Parkland school shooting in Florida two years ago, President Donald Trump chided Republican lawmakers for being too “scared” of the National Rifle Association to tighten gun laws — then backed away from the idea.

After back-to-back mass shootings in Ohio and Texas in 2019, Trump embraced calls for “strong background checks” — only to backpedal once again.

Now, as he primes the pump on his 2020 reelection effort, Trump is going all-in on embracing the mantle of gun rights champion, a stark turn from earlier moments in his presidency when he toyed with the idea of pushing Congress to enact stricter gun laws.

There was no public discussion of tighter gun laws when Trump welcomed Parkland families to the White House for a private meeting on Monday, four days before the two-year anniversary of the rampage that left 17 dead. Instead, administration officials unveiled a website intended to help educators, parents and law enforcement address threats to school safety.

In recent weeks, Trump has repeatedly warned supporters at his rallies that Democrats “will take your guns away.” Last month, he labeled Virginia Gov. Ralph Northam a “whack job” as gun rights advocates protested the Democratic governor’s moves to tighten gun laws in the aftermath of a mass shooting in Virginia Beach.

Drawing a straight line from gun rights to presidential politics, Trump tweeted that Democrats in the state “will take your guns away. Republicans will win Virginia in 2020. Thank you Dems!”

And on Monday night, as he came to the apex of an hourlong campaign speech in New Hampshire, Trump framed his supporters’ Second Amendment right to bear arms as being as precious as the rights to privacy, free speech and religious freedom.

Campaign officials believe the effort could help put states like Minnesota, New Mexico and New Hampshire in play. For that to happen, Trump will need to draw even more rural and white men to the polls — key groups that helped drive his 2016 surprise victory.

“Democrats have shown they don’t respect the Second Amendment, which will be one of many contrasts drawn during the campaign.” — Trump campaign spokesman Tim Murtaugh

Trump’s advisers believe his consistent efforts to spotlight his credentials as a Second Amendment warrior can help him draw a contrast with the eventual Democratic presidential nominee. The top tier of Democratic candidates have made bolstering gun restrictions a key part of their platforms.

Mike Bloomberg, a former New York City mayor, has poured millions of dollars from his own fortune into supporting a series of gun control advocacy groups. Former Vice President Joe Biden served as the Obama administration’s point man on the president’s failed push for sweeping gun reform laws following the Sandy Hook school shooting in Connecticut. Vermont Sen. Bernie Sanders, who got a D- grade from the NRA, has been knocked by fellow Democrats for not being tough enough on gun restrictions.

“Democrats have shown they don’t respect the Second Amendment, which will be one of many contrasts drawn during the campaign,” Trump campaign spokesman Tim Murtaugh said.

After spending more than $50 million in support of Trump’s 2016 election victory, the NRA is likely to have less impact on this election cycle, said Robert Spitzer, a professor of political science at the State University of New York-Cortland whose research focuses on American gun laws.

The powerful gun rights group has been mired in financial difficulties, internal strife within the organization’s leadership, and probes by the New York attorney general’s office that threaten the group’s tax-exempt status. 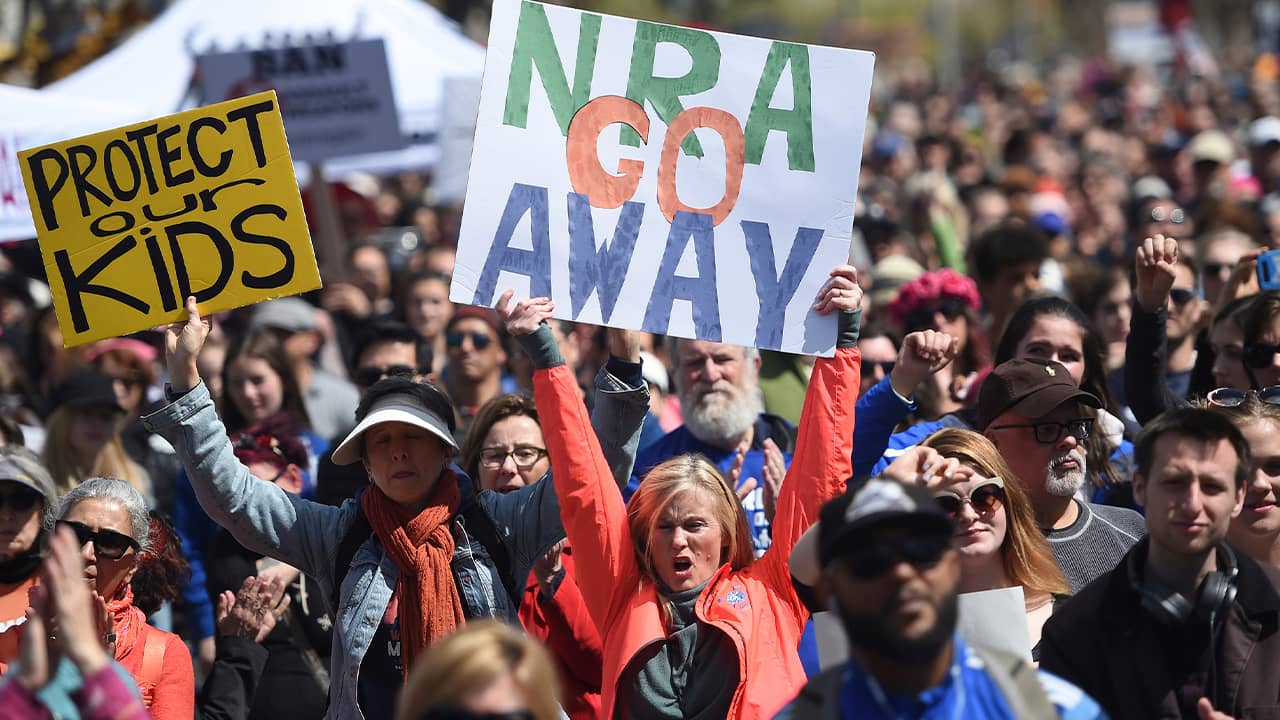 FILE – In this March 24, 2018, file photo, crowds of people participate in the March for Our Lives rally in support of gun control in San Francisco. The National Rifle Association sued San Francisco on Monday, Sept. 9, 2019, over the city’s recent declaration that the gun-rights lobby is a “domestic terrorist organization.” (AP Photo/Josh Edelson, File)

Trump’s joint campaign committees and the Republican national party committee had $195 million in cash on hand at the close of 2019, making the NRA’s money less significant this election cycle.

But with a hard gun-rights pitch, Trump appears to be strategizing that he could persuade some voters who have become disenchanted with politics to come back to the ballot box to vote for him.

“His tactic has been to say incendiary things about guns to whip up the base, but he and the NRA haven’t been able to pass any of the gun lobby’s priority legislation — even with a Republican Congress for two years.” — Shannon Watts, founder of Mom’s Demand Action, part of the Everytown for Gun Safety coalition

“He really is doubling down not on the broadening of his base but for pushing for higher turnout among his people,” Spitzer said. “One of the keys in 2016, but not the only one, was that turnout among rural white voters was a little higher than predicted. This pitch, he figures, will help him get there.”

Trump and fellow Republicans are likely to face a deluge of spending from gun control advocates, who think their message will resonate with on-the-fence suburban voters.

Everytown for Gun Safety, an umbrella group of gun control advocacy organizations funded by Bloomberg, recently announced that it would spend $60 million to beat gun rights proponents on the state and federal level in 2020.

The group has not said how much it would spend on the presidential race, but thus far has budgeted $1.25 million to help reelect North Carolina Gov. Roy Cooper and Pennsylvania Attorney General Josh Shapiro, both Democrats. It also plans to spend some of that first tranche of money toward beating two Republican senators, Cory Gardner of Colorado and Martha McSally of Arizona.

Gun control advocates feel emboldened after the 2018 midterm elections in which more than 30 NRA-backed Republican candidates lost their races.

“His tactic has been to say incendiary things about guns to whip up the base, but he and the NRA haven’t been able to pass any of the gun lobby’s priority legislation — even with a Republican Congress for two years,” said Shannon Watts, founder of Mom’s Demand Action, part of the Everytown for Gun Safety coalition.

When Trump met with members of the group Stand with Parkland on Monday, administration officials highlighted the school safety website. Stand with Parkland backed the creation of the website — but it also has urged Congress to require universal background checks on gun purchases.

Asked if there was disappointment in the president backing away from taking on background checks, one Parkland parent who met with Trump, Max Schachter, said the president’s efforts should not be minimized.

“Of course there is always more that can be done,” said Schachter, whose 14-year-old son, Alex, was among the victims at Parkland. “But let’s not let perfection be the enemy of good.”

On the campaign trail, Trump’s dire warnings about what might happen to American gun owners if a Democrat wins the White House have become a regular line in his speeches, reliably drawing boos and hisses for his to-be-determined opponent.

At a recent campaign rally in Iowa, Trump again turned his attention back to Virginia, where Democrats in November claimed majorities in both houses of the legislature and secured the first unified Democratic government in the commonwealth in 26 years.

He offered similar dark predictions to a friendly crowd last month in New Jersey, saying the gun control effort in Virginia was “just the beginning.”

And on Monday night, he reassured New Hampshire supporters that his administration is “going to protect your Second Amendment, by the way.”