By Manuela Tobias, The Fresno Bee and Matt Levin, CalMatters

With yellow vests and flashlights, over 200 volunteers fanned out across Fresno to count homeless people on Tuesday night. Along the railway, one group walked by a freight container with a mattress and shoes inside, and past a dirt cot enclosed in a tarp pegged to a bush.

“If we don’t use the right numbers for the homeless population, the political class are placing themselves in a situation where they are most likely going to fail. They can spend billions of dollars, have very effective programs, get a lot of people housed, and we’re still going to have this very large (homeless) population.” — Christopher Weare, a UC Berkeley lecturer who researches homelessness

The people who likely slept there the night before were no longer present, and thus not counted.

Continuing on, BNSF Railway agent Adam Garza led volunteers to where he last week spotted at least a half-dozen people living. Now there were none. “It’s kind of funny,” he said. “CHP cleared out everybody in the areas that we have problems with in these last few weeks.”

The Fresno area, by last year’s count, had the highest percentage of unsheltered people anywhere in the country. This year, volunteers are counting again — joining Los Angeles, San Diego and hundreds of cities and counties nationwide that will report their homeless counts to the U.S. Department of Housing and Urban Development. These “one night count” numbers will translate to state and federal dollars aimed at alleviating the problem.

Last year California’s cities and counties tallied more than 150,000 people living on the streets or in emergency shelters — a 17% uptick from the previous year.

But as important as that 150,000 figure is, nearly everyone involved in one-night counts acknowledges that the volunteer-led process significantly underestimates the actual number of people without a safe place to call home.

“If we don’t use the right numbers for the homeless population, the political class are placing themselves in a situation where they are most likely going to fail,” said Christopher Weare, a UC Berkeley lecturer who researches homelessness. “They can spend billions of dollars, have very effective programs, get a lot of people housed, and we’re still going to have this very large (homeless) population.” 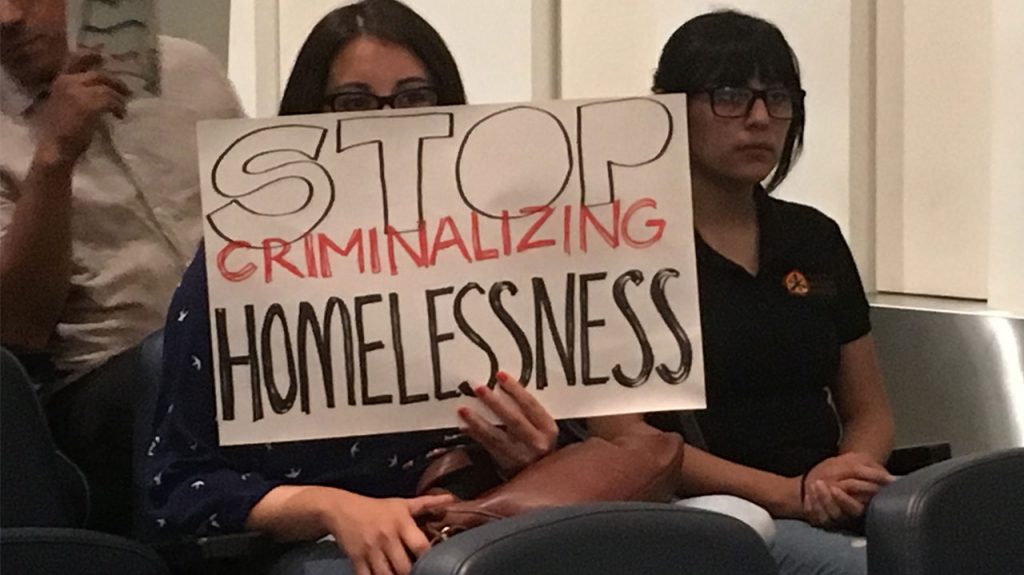 California’s Numbers Will Be Big

Advocates complain that the federal definition of homelessness is far too narrow — it excludes people who are doubled-up or couch surfing with relatives or friends, or paying for a cheap motel room. Even those living outdoors can be easily missed, especially if law enforcement has recently cleared encampments. Weare, who’s refining a more comprehensive point-in-time counting method, produced a Sacramento number nearly six times greater than the number of homeless people in the federal count.

Amid all the uncertainties about the accuracy of the count, one thing seems certain: California’s numbers will be big — and weaponized, politically.

The Trump administration used the 2019 count to assail the state’s Democratic lawmakers and Gov. Gavin Newsom for what the president described as a tremendous failure. Last month U.S. Housing Secretary Ben Carson singled out California no fewer than nine times in his press release announcing national homelessness figures.

If it wasn’t for California and Oregon, the administration noted, the country could boast a nationwide decline.

Every community in California is required by HUD to conduct a one-night count every other year, but some places such as Fresno and Los Angeles County opt to conduct theirs every year. The tabulations made this month will form the basis for the certified  annual U.S. count that the Department of Housing and Urban Development will release next December.

Newsom and other California mayors and legislators will be on the hook to show improvement — but that time lag is likely to work against them, and could spell real political problems for the governor.

Most of the $650 million in emergency homelessness funding he approved last year won’t materialize in shelters or emergency rental assistance until well after the one-night counts are concluded. The earliest this year’s $750 million proposal could be accessed by homeless service providers would be July, and that would require a two-thirds vote of state lawmakers.

Technically, statewide homeless counts should only be compared every other year, as communities are required to conduct one night counts only in odd years.

Why the Count Will Fall Short

Only a handful of cities and counties across California actually try to send volunteers to every corner of their jurisdiction. Most send counters only to homeless “hot spots” — places known to service providers to have lots of unhoused residents sleeping outdoors.

“If someone is just walking the street at night and doesn’t have a shopping cart, they may not be recognized as homeless, when they in fact have nowhere to go.” — Christopher Weare, a UC Berkeley lecturer who researches homelessness

It’s also difficult for volunteers to identify on sight who is homeless and who isn’t.

“If someone is just walking the street at night and doesn’t have a shopping cart, they may not be recognized as homeless, when they in fact have nowhere to go,” said Weare, the UC Berkeley lecturer.

And encampment cleanups pose “a huge challenge,” said Jody Ketcheside, vice chair of the Fresno-Madera Continuum of Care, who coordinates the Fresno count. “Sometimes those will happen the day before, or the day of, and people are displaced and we can’t find them again, because we do our outreach during (the week prior) to determine where the encampments are.”

Another limitation of the one-night-count: timing. The snapshots don’t capture the much larger number of Californians who fall into homelessness over the course of an entire year.

Nonetheless, Kethceside said she thinks the counts are getting more accurate, in part because of more volunteers. Over 300 people signed up to count heads or conduct surveys in Fresno this year, a record.

But a more comprehensive count now could distort how well homelessness can be tracked over time. Ironically, more volunteers identifying more people experiencing homelessness could overstate how much homelessness has grown significantly, when perhaps it was simply undercounted in the past.

“Although a lot of us don’t like it, HUD doesn’t have another way right now,” said Doreen Eley, assistant housing manager at Fresno Housing Authority. “This is what they have, so this is what we do.” 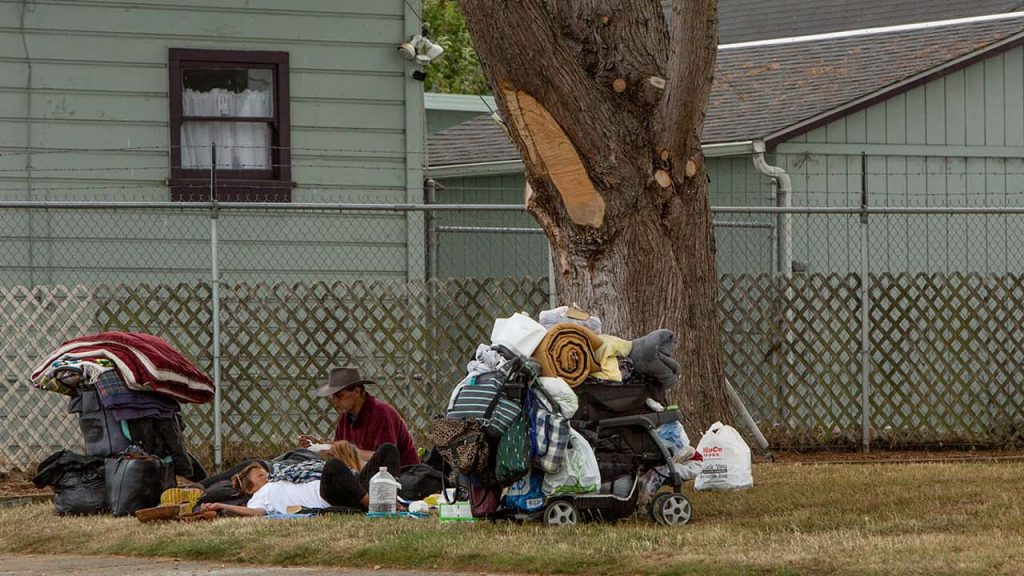 A man and woman rest and eat on a grassy patch surrounded by belongings in Eureka on August 21, 2019. (Anne Wernikoff for CalMatters)

How the Numbers Matter:

The more people counted in Los Angeles than Fresno, the larger the share Los Angeles got of that overall funding, according to Russ Heimerich, a spokesman for the Business, Consumer Services and Housing Agency.

Federal funding is also tied to point-in-time counts, although that funding is set to maintain current local spending, according to Eley.

Newsom has asked the Legislature for an additional $750 million in state emergency funds for homelessness. Whether that money will also be allotted using the new point-in-time numbers remains up in the air, according to Ali Sutton, deputy secretary for homelessness. But there’s no better option in sight.

“We’re all aware it’s not a perfect measure but it’s an agreed upon best measure for understanding the current scope of the problem,” Sutton said. “We’re using HUD’s system. They understand the limitations and we’re in conversations with them, but it’s really their system.”

Is There a Better Way to Do This?

“Everybody uses these numbers as if they actually tell us something,” said Paul Boden, executive director of the Western Regional Advocacy Project. “And what they’re telling us lately is the numbers are going up, which means in reality, it’s probably ten times worse — because they’re using a system that was artificially created to keep the numbers as low as possible.”

“I’ve been blessed by God, and Fresno police have been pretty understanding. They haven’t impounded my truck. You know, if they do, I’ll probably end up cuddling with that guy.” — a man counted in his vehicle by Fresno volunteers

For a more comprehensive count, Boden points to data from the U.S. Education Department. It it includes kids who live doubled-up with other families and stay in motels, regardless of who funds their stay.

Statewide, nearly 246,000 students from kindergarten through high school were homeless in 2018, according to the Department of Education’s more expansive definition. That’s nearly 100,000 more than California’s official homeless count of people of all ages last year, and doesn’t include those homeless children’s parents, or children under age 5.

Advocates also suggest a gaps analysis, which looks at how many people have tried to access a service and how many were accommodated in order to determine funding.

In Fresno, where new shelter beds that opened last year fill within hours, the gap between supply and demand for homeless services is high.

“The other thing that’s really hard when you do the count and surveys is, you’re counting more people than you can actually help today. That gets tough because it kind of makes our homeless population numb to the questions,” said Shawn Jenkins, chair of the Fresno-Madera Continuum of Care.

For now, the state’s tallies are done, the numbers will wend their way to Washington D.C., and untold tens of thousands of Californians will remain without shelter.

“I’ve been blessed by God, and Fresno police have been pretty understanding. They haven’t impounded my truck,” said one such man counted in his vehicle by Fresno volunteers, as a woman slept in the passenger seat. “You know, if they do, I’ll probably end up cuddling with that guy,” he quipped about his friend leaning on the other side of the truck.

“But I’ll probably freeze to death.”

Manuela Tobias is a reporter with The Fresno Bee and Matt Levin is the housing reporter at CalMatters. This article is done with The California Divide, a collaboration among newsrooms examining income inequity and economic survival in California.