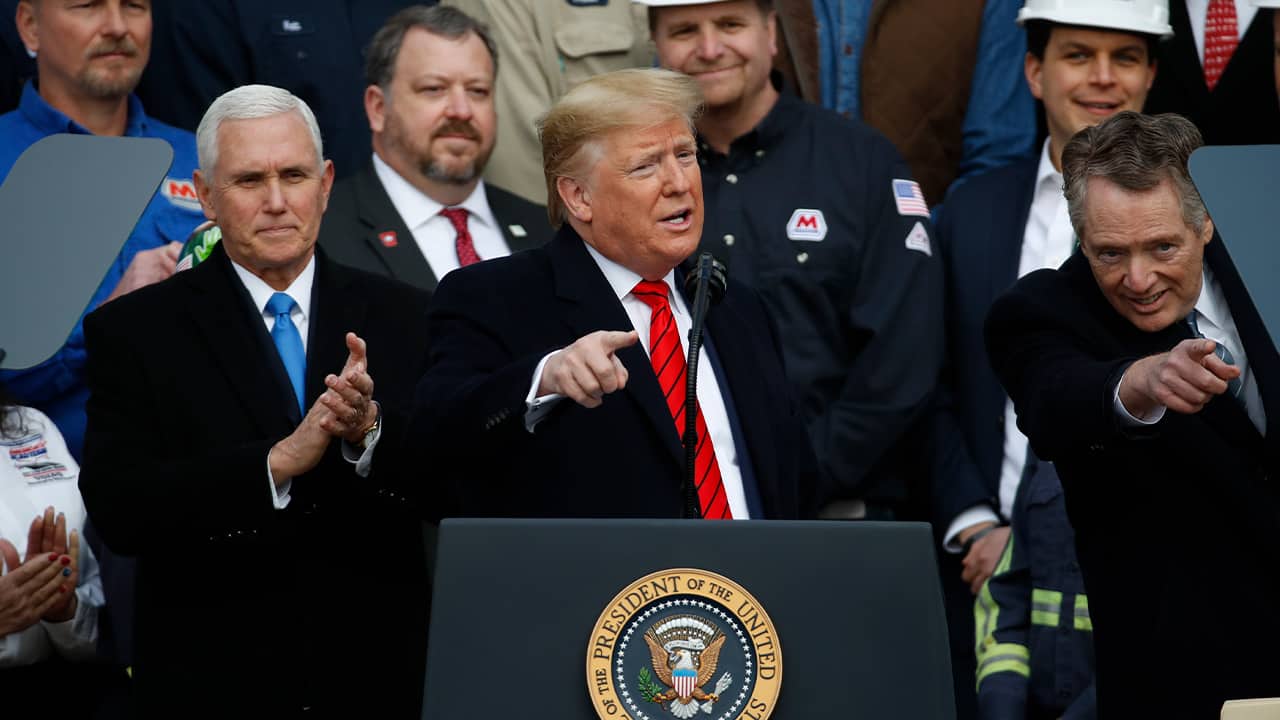 WASHINGTON — President Donald Trump on Wednesday signed into law a major rewrite of the rules of trade with Canada and Mexico that he said replaces the “nightmare” of a Clinton-era agreement and will keep jobs, wealth and growth in America. President Donald Trump speaks during an event at the White House to sign a new North American trade agreement with Canada and Mexico, Wednesday, Jan. 29, 2020, in Washington. Vice President Mike Pence is left of the President. (AP Photo/Alex Brandon)

Trump made a point of praising Republican legislators for their work in passing the deal but did not mention the role of Democrats, who said that even if they weren’t invited to the signing ceremony, their influence was being felt.
“What the president will be signing is quite different from what the president sent us,” said House Speaker Nancy Pelosi, D-Calif. “We were able to make vast improvements. If we weren’t, we would not have been able to pass the bill.”
Rep. Richard Neal, chairman of the House Ways and Means Committee, said it only passed Congress because of how the Democrats forced changes in Trump’s original proposal. “They voted for it for one reason, is because of how we shaped and altered the president’s proposal,” said Neal, D-Mass.
NAFTA, which took effect in 1994 under President Bill Clinton, tore down trade barriers between the three North American countries and commerce between them surged. But Trump and other critics said NAFTA encouraged factories to leave the United States and relocate south of the border to take advantage of low-wage Mexican labor.
Trump threatened to leave NAFTA if he couldn’t get a better deal, creating uncertainty over regional trade.
His trade negotiator, Robert Lighthizer, pressed for a revamped pact designed to bring factory jobs back to the United States. The new agreement, for example, requires automakers to get 75% of their production content (up from 62.5% in NAFTA) from within North America to qualify for the pact’s duty-free benefits. That means more auto content would have to come from North America, not imported more cheaply from China and elsewhere. The President Wasn’t Wasting Any Time Highlighting the Deal

At least 40% of vehicles would also have to originate in places where workers earn at least $16 an hour. That would benefit the United States and Canada — not Mexico, where auto assembly workers are paid a fraction of that amount.