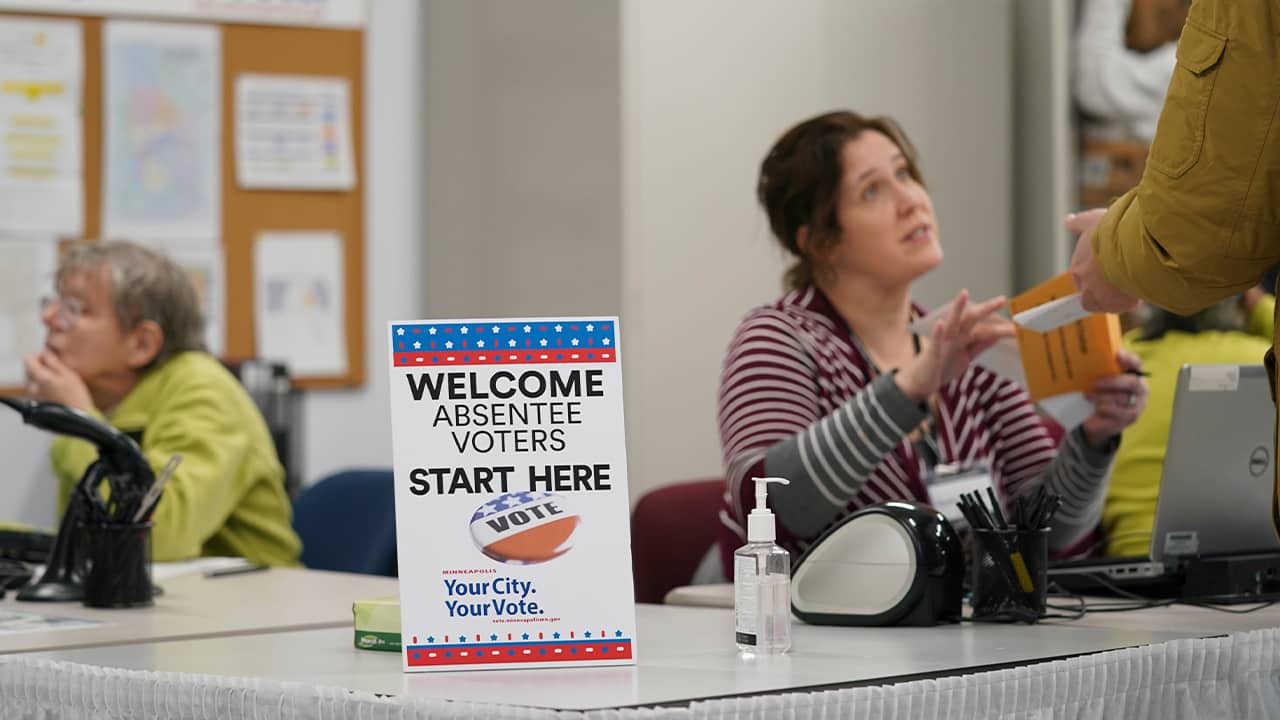 SACRAMENTO — The Iowa caucuses are more than a week away, but millions of Americans are already free to vote.
Early voting in the crush of Super Tuesday states that hold primaries on March 3 amounts to a parallel campaign for the Democratic nomination. While much of the focus is on who will come out on top in the traditional first four voting states, early voting will allow a much broader swath of voters to play a key role in picking the nominee.
In Minnesota, in-person early voting began Jan. 17. Vermont’s deadline to mail out its absentee ballots was the same day. Many of the 14 Super Tuesday states will offer some form of early voting between now and mid-February.
These states will test the organizational strength of the White House hopefuls. The campaigns must balance the demands of the first four states — Iowa, New Hampshire, South Carolina and Nevada — while also making sure to target potential supporters in the Super Tuesday states that follow. Some campaigns must manage that two-step while their candidate is stuck in Washington participating in President Donald Trump’s impeachment trial.
Several campaigns said they’ve been working to perfect this balance for months.

“Super Tuesday has never really been March 3 for us,” said Pete Kavanaugh, an adviser for former Vice President Joe Biden’s campaign. “In our minds and from a resource allocation perspective, Super Tuesday begins in early February.” Michael Bloomberg, the billionaire businessman, is ignoring the early states entirely and using his nearly bottomless resources to campaign hard in the Super Tuesday states.
“We need supporters for Mike Bloomberg to vote early, independent of whatever is going on,” said Will Dubbs, deputy states director for Bloomberg’s campaign. “It is just very, very important for us to make sure we bank those votes, and we can concentrate our efforts elsewhere.”
Bernie Sanders, meanwhile, sees early voting as a way to boost turnout among core constituencies like young, minority and working-class voters. Early voting opens new opportunities for people with strict work schedules or other barriers to voting to find time to cast ballots beyond the typical Election Day, spokeswoman Sarah Ford said.
“Early voting is another vehicle to make sure those people have the opportunity to vote for Bernie,” she said.
The campaign of Pete Buttigieg, the former mayor of South Bend, Indiana, is educating volunteers in Minnesota, Colorado, California and Texas about the early voting process. And Minnesota Sen. Amy Klobuchar rallied in her home state recently to mark the start of early voting and generate enthusiasm among voters who have sent her to the U.S. Senate three times, while freshman Rep. Ilhan Omar campaigned on behalf of Sanders.

Davis Senseman slept in an RV outside a Minnesota polling place with friends so that they could be some of the first people to vote in the presidential election.
“With Elizabeth Warren I finally had a candidate that I’m really excited about,” said Senseman, a 42-year-old attorney. “I want to do this first because I’m for something, not voting against something.”
The biggest early voting state, California, will mail ballots to more than 12 million voters starting Feb. 3, the same day as the Iowa caucuses, though not all of those voters will get a Democratic primary ballot. Colorado, North Carolina and Texas, which offer combinations of mail-in and in-person early voting, are also likely to have a high percentage of early voters, said Michael McDonald, a voting expert who directs the United States Elections Project at the University of Florida.
It’s difficult to predict how many people will take advantage of early voting, McDonald said. While early voting offers an opportunity for campaigns to ensure their most intense supporters cast ballots early, many primary voters will wait until they begin seeing the results in earlier voting states in case their preferred candidates drop out. At least one state, Minnesota, gives voters an option to retrieve their ballot and change their votes up to a week before Election Day.
California has by far the largest population of would-be early voters. Paul Mitchell, who runs the nonpartisan Political Data Inc. that analyzes and sells voter data, predicts about a quarter of the state’s eventual Democratic electorate will have cast ballots by the time Nevada holds its caucuses on Feb. 22. He projects that will increase to 40% by the time South Carolina votes on Feb. 29.

“If you have people who are with you now, you need to bank those votes,” he said. “If you’re running a campaign and can turn out 1 million voters on Election Day, if you can get 200,000 of them to vote early, that reduces your workload.”


“If you have people who are with you now, you need to bank those votes. If you’re running a campaign and can turn out 1 million voters on Election Day, if you can get 200,000 of them to vote early, that reduces your workload.” — Paul Mitchell, who runs the nonpartisan Political Data Inc. that analyzes and sells voter data
In Colorado, where everyone is mailed a ballot, state officials expect 60% of voters to send their ballots back early. In North Carolina, about a quarter of people could vote early, McDonald predicted.
While early voting is an important component of campaign strategy, some experts and campaign veterans doubt its overall effect on a race’s outcome. Robby Mook, who managed Democrat Hillary Clinton’s 2016 campaign, said the voters who are likely to vote early are a campaign’s most hardcore supporters who would have supported that candidate no matter what.
“You’re often cannibalizing from what you were going to get on Election Day anyway,” he said. “The question every campaign, if it’s honest, is asking itself is: ‘How many new votes have I turned out?’”
But other observers say early voting can affect candidates’ momentum. Take California, which takes weeks to finish counting its ballots. The first reported votes on election night will be a reflection of the votes that came in earliest. If a candidate does particularly well with those voters, he or she could get an initial boost of energy, even if the results change as later votes roll in in the following weeks.
“If campaigns can use the mechanics of the election to drive their votes to get cast in those earlier tranches, you can have a greater impact on the national narrative,” Mitchell said.