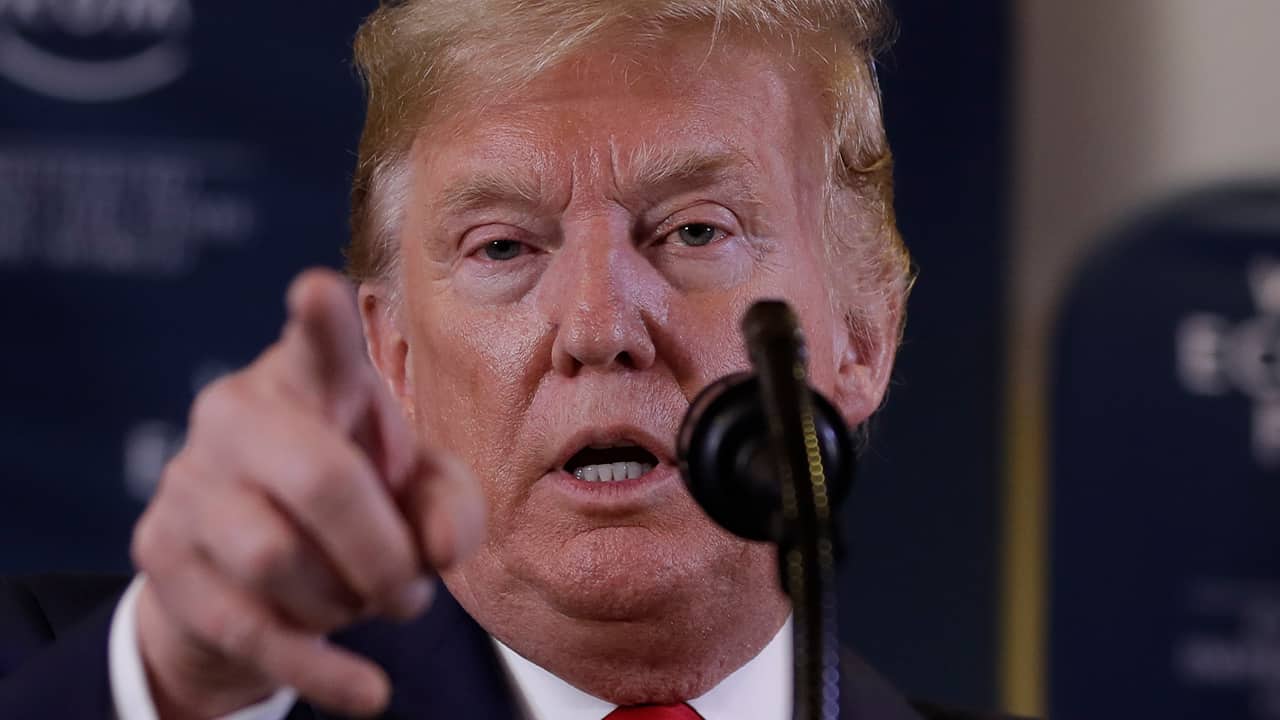 
Related Story: Buckle Up: What to Watch as Impeachment Trial Takes off Chief Justice John Roberts gaveled open the session, with House prosecutors on one side, Trump’s team on the other, in the well of the Senate, as senators sat silently at their desks, under oath to do “impartial justice.” No cellphones or other electronics were allowed. A copy of a Senate draft resolution to be offered by Senate Majority Leader Mitch McConnell, R-Ky., regarding the procedures during the impeachment trial of President Donald Trump in the U.S. Senate is photographed in Washington, Monday, Jan. 20, 2020. McConnell is proposing a condensed, two-day calendar for opening arguments in Trump’s impeachment trial, ground rules that are raising objections from Democrats on the eve of the landmark proceedings. (AP Photo/Jon Elswick)

Only on one amendment, to allow more time to file motions, did a single Republican, Sen. Susan Collins of Maine, join Democrats. But it, too, was rejected, 52-48.
Motions from the Trump legal team were due Wednesday morning, but the attorneys weren’t filing any, said Jay Sekulow, one of the president’s lawyers. That means there will be no motion to dismiss the case as some Republicans had discussed.
As the visitors’ gallery filled earlier with guests, actress-and-activist Alyssa Milano among them, and Trump’s most ardent House allies lining the back rows, the day that began as a debate over rules quickly took on the cadence of a trial proceeding over whether the president’s actions toward Ukraine warranted removal from office.
“It’s not our job to make it easy for you,” Rep. Adam Schiff, the chairman of the House Intelligence Committee leading the prosecution, told the Senate. “Our job is to make it hard to deprive the American people of a fair trial.”
White House counsel Pat Cipollone, the president’s lead lawyer, called the trial “a farce.” He scoffed that the House charges against Trump were “ridiculous.”
The White House legal team did not dispute Trump’s actions, when he called Ukraine and asked for a “favor,” which was to investigate Biden as he withheld military aid the ally desperately needed as it faced off with hostile Russia on its border. But the lawyers insisted the president did nothing wrong.
“Absolutely no case,” Cipollone said.

Trial Set Against the Backdrop of the 2020 Election

Schiff, the California Democrat, said America’s Founders added the remedy of impeachment in the Constitution with “precisely this type of conduct in mind — conduct that abuses the power of office for a personal benefit, that undermines our national security, and that invites foreign interference in the democratic process of an election.”
Said Schiff: “It is the trifecta of constitutional misconduct justifying impeachment.” Sekulow, the other lead lawyer on Trump’s team, retorted, “I’ll give you a trifecta,” outlining complaints over the House Democrats’ impeachment inquiry process.
In Davos, Trump repeated his attacks on Democratic House managers serving as prosecutors in the trial, saying that he’d like to “sit right in the front row and stare at their corrupt faces” on the Senate floor during the trial but that his attorneys might have a problem with it.
And he said he wants to deliver the State of the Union as scheduled on Feb. 4 even if the trial is ongoing, calling the address “very important to what I am doing” in setting his administration’s agenda.
The impeachment trial is set against the backdrop of the 2020 election. All four senators who are Democratic presidential candidates were off the campaign trail, seated as jurors.
“My focus is going to be on impeachment,” Sen. Bernie Sanders, the Vermont independent, told reporters.

McConnell stunned senators and delayed the start of proceedings with his decision to back off some of his proposed rules. He made the adjustment after encountering resistance from Republicans during a closed-door lunch meeting. Senators worried about the political optics of “dark of night” sessions that could come from cramming the 24 hours of opening arguments from each side into just two days.
Collins and Sen. Lisa Murkowksi of Alaska, who often buck party leadership, along with a substantial number of other Republicans, wanted to make the changes, according to people familiar with the situation.
It was only when the clerk started reading the dry language of the resolution that the hand-written changes to extend debate to three days became apparent. It also allowed the House impeachment record to be included in the Senate.
The turnaround was a swift lesson as White House wishes run into the reality of the Senate. The White House wanted a session kept to a shorter period to both expedite the trial and shift more of the proceedings into late night, according to a person familiar with the matter but unauthorized to discuss it in public.
Trump’s legal team, absent its TV-showcase attorneys, Alan Dershowitz and Kenneth Starr who were not in the chamber, argued that in seeking new evidence the House was bringing a half-baked case.
But Rep. Zoe Lofgren of California, one of the House managers and the first woman to argue for the prosecution in a presidential impeachment trial, said the House wasn’t asking the Senate to do the job for them. “The House is asking the Senate to do its job, to have a trial,” she said. “Have you ever heard of a trial without evidence?”

No President Has Ever Been Removed From Office

The White House had instructed officials not to testify in the House inquiry, and refused to turn over witnesses or documents, citing what is says is precedence in defiance of congressional subpoenas.