NEW YORK — Today she travels the world, attends a red-carpet movie premiere and sits on panels with astronauts, former presidents and feminist icons.

“Being bombarded with those headlines growing up and never feeling represented by them, I did what any millennial would do, which was to turn to social media. I decided to put my own place out there and create that space for us to talk back.” — Amani Al-Khatahtbeh

But in the years after 9/11, Amani Al-Khatahtbeh was just a New Jersey teenager, writing a blog from her bedroom. She used the blog to connect with other young Muslim girls and defy stereotypes. At the time, the only reflections of herself in the news seemed to be men in orange jumpsuits who looked like her father and women who seemed silent and oppressed, she said.

“Being bombarded with those headlines growing up and never feeling represented by them, I did what any millennial would do, which was to turn to social media,” Al-Khatahtbeh said. “I decided to put my own place out there and create that space for us to talk back.”

A decade later, her MuslimGirl.com site is an online magazine with a global audience writing about how it feels to be the only woman in a hijab at a kickboxing class, offering beauty tips and covering stories of teenagers fighting Islamophobia. Last year, the domain that she bought for $7 had more than 2 million hits.

The site “is the biggest English-language online platform for Muslim women voices,” the tech entrepreneur, now 27, said at her family’s video game store in New Jersey. “Our goal is to reclaim our narrative.”

She was 9 when the airliners struck the World Trade Center towers, and she remembers the warning of her Jordanian immigrant father: “They’re going to blame us.”

In this Dec. 19, 2019, photo, Amani Al-Khatahtbeh, left, films a video with Maryam Saad after recording a podcast pilot at Spotify’s headquarters in New York. Al-Khatahtbeh started the website as a way to defy Muslim stereotypes after 9/11. A decade later, Al-Khatahtbeh has built it into an online magazine with a global audience. (AP Photo/Emily Leshner)

In the aftermath, she was bullied. People threw eggs at her home and slashed her mother’s tires. Her family faced such a backlash that her father temporarily relocated them to Jordan.

While she is proud of being “born and raised a Jersey girl,” it was only in Jordan that she began to take pride in her roots. She learned Arabic and appreciated Middle Eastern food and hospitality. When she returned to the U.S., she began to wear a headscarf as an act of defiance against a rising anti-Muslim tide.

“I lost a lot of friends, people started treating me differently,” she said. But she also became an ambassador for her faith. Students, even teachers, stopped her in school and asked about the Quran and Islam.

“I had to learn as much as I possibly could about my own religion, the ins and outs of it, what Islamophobes were saying about it, so that I could understand how to respond,” she said.

Eventually, she concluded that if the people around her had those questions, so did many others.

She started the blog at 17 with help from friends at her local mosque. Most of the work is still a grassroots effort. Her younger brother, Ameer, a journalism student at Rutgers University, helps run communications. Although the site pays a group of editors, most articles are written by Muslim women volunteers.

MuslimGirl has also partnered up with companies like ORLY for the creation of a halal nail polish and received support from the Malala Fund. Most recently, VaynerMedia founder Gary Vaynerchuk became an investor.

“It was such a full-circle moment for me, because when I was a little girl, Princess Jasmine was one of the only representations that I had growing up.” — Amani Al-Khatahtbeh

The site’s topics — in categories like #woke, #fit and #fierce — range widely. Posts include a list of the top 10 most beautiful verses from the Quran, a look at Marvel’s newest Muslim superhero and a story about how hijab-wearing Olympic fencer Ibtihaj Muhammad has a Barbie doll made in her likeness.

The site and its founder have attracted a legion of devoted fans who follow her on social media under the hashtag “#muslimgirlarmy. She also has detractors who say she is too Americanized or too progressive. Some question her appearance, such as the way she wears her hijab or shows her arms. She also has tattoos, an eyebrow ring and long manicured nails.

“A lot of times, at any given moment, I can have like two completely different, opposing parties be bonded by their criticism of us,” Al-Khatahtbeh said,

These days, she divides her time between Los Angeles and New York, attending meetings for potential business partners and live-recording moments of her life for Instagram and Twitter.

In recent years, Forbes magazine chose her for its “30 Under 30” list of top achievers. Michelle Obama asked her to speak at the United State of Women Summit. She was also part of a panel that included female astronaut Cody Coleman and was moderated by former President Bill Clinton. Most recently, she served on an advisory committee for the live-action remake of Disney’s “Aladdin” and attended the premiere.

“It was such a full-circle moment for me, because when I was a little girl, Princess Jasmine was one of the only representations that I had growing up,” she said. 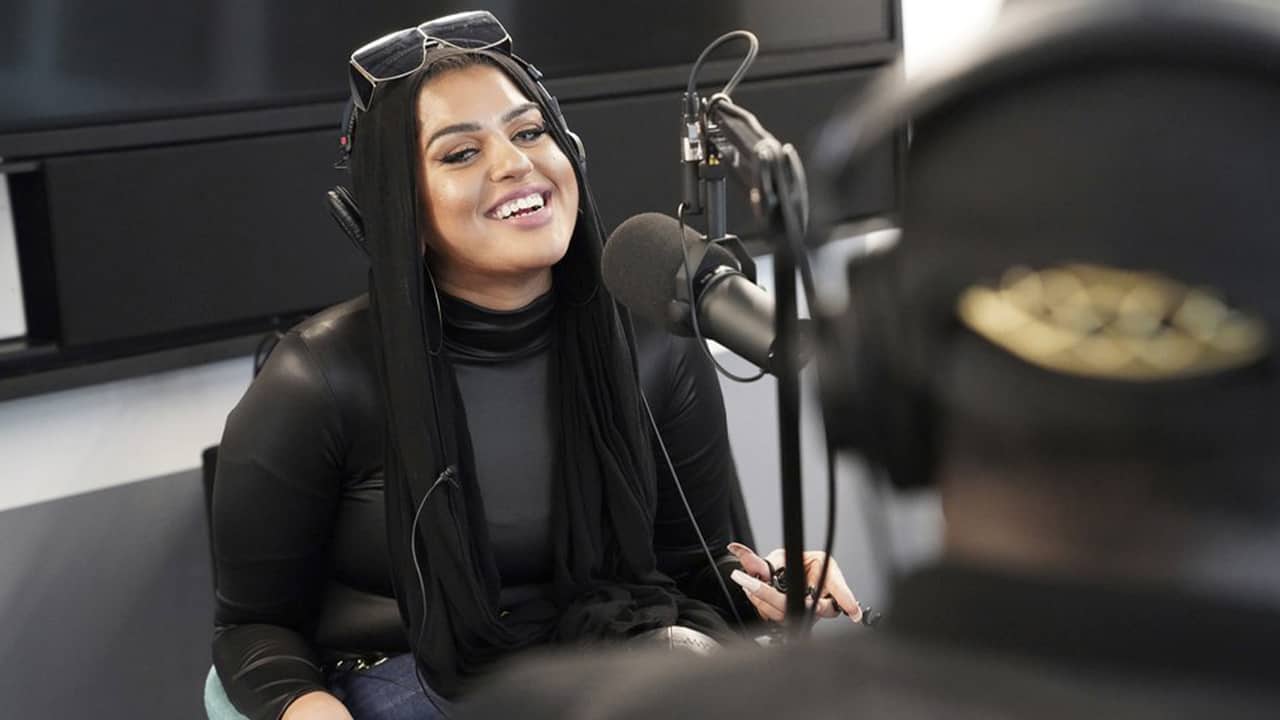 In this Dec. 19, 2019, photo, Amani Al-Khatahtbeh, founder of Muslimgirl.com, records a podcast pilot at Spotify’s headquarters in New York. On her site, Al-Khatahtbeh is especially proud of stories that deal with race and sexuality. “Of course, female sexuality is honored within our religion, and it shouldn’t be something we shy away from or think of as a taboo.” (AP Photo/Emily Leshner)

Being on the committee allowed her “to try to course-correct some of the problematic stereotypes” in the first movie, including some that she did not notice as a child.

She pointed to two examples: The opening song talked about a faraway place that is “barbaric.” And Jasmine was dressed in a belly dancing outfit and chains in a “hyper-sexualized and oppressive way.”

On her site, Al-Khatahtbeh is especially proud of stories that deal with race and sexuality. “Of course, female sexuality is honored within our religion, and it shouldn’t be something we shy away from or think of as a taboo.”

Related Story: A Tattoo at a Time, Afghan Woman Takes on Society’s Taboos

Most of the site’s visitors live in the U.S. and Britain, and an estimated 70% are Millennials and Gen Z ages 15 to 32. One of the site’s most controversial stories was written by a Muslim transgender convert.

“We want to push the envelope that way by creating that space and reminding people that they have a place within our religion,” she said. “I’m really proud of that, because one thing MuslimGirl does really well is we attract youth. They want to come in, and they want to learn more about Islam because of the way that we put it out there. We always say that our language is the Millennial tongue.”