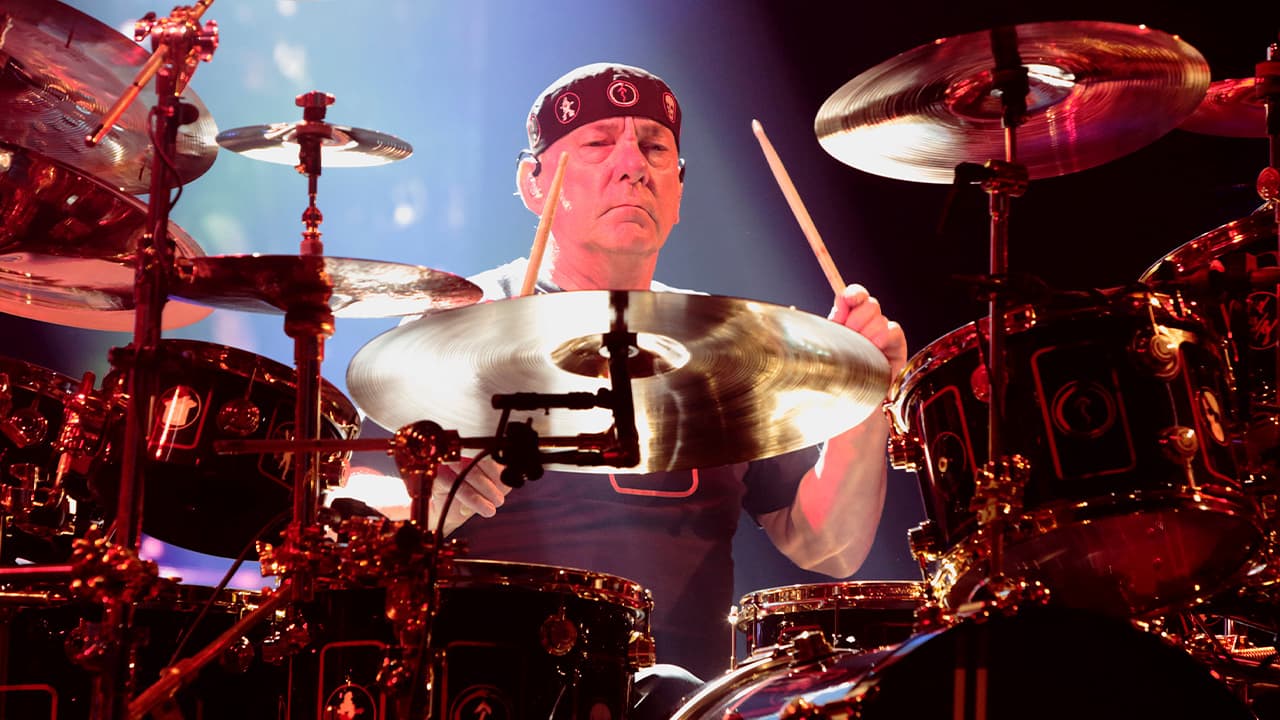 SANTA MONICA — Neil Peart, the renowned drummer and lyricist from the influential Canadian band Rush, has died. He was 67.

Music Became an Outlet for the Self-Described Introvert

“We’ve always said it’s not something that meant a lot to us, but we knew our fans cared so much to be validated like that — that their favorite band like their favorite sports team should be celebrated as champions,” Peart told The Associated Press at the time. “We always knew that was the case and certainly to see it blossom after this is a testament to the truth of that.”
Peart was born on Sept. 12, 1952 in Ontario. Music became an outlet for the self-described introvert who remained a quiet, under-the-radar star his entire career.
“I was very academic until I discovered drums,” he explained in a 2017 interview with Classic Rock. “Then I was a monomaniac about drumming. I was physically awkward. My ankles were weak, so I couldn’t play any sports. I couldn’t skate and I couldn’t play hockey, which in Canada is like football is in the U.K. And that makes you a pariah as a boy.”
When Rush formed in 1968, its original lineup included Lifeson, bassist Jeff Jones and drummer John Rutsey. After a few weeks, Lee replaced Jones, and in 1974, Peart replaced Rutsey weeks before Rush’s first U.S. tour. Rush’s first album with Peart — by then the band’s principal songwriter — was 1975’s platinum-seller “Fly by Night.” They released another album that same year, “Caress of Steel,” which reached gold status.
In 1976 the band marked a major breakthrough with the album “2112,” which sold three million units in the U.S. The first side of the album tells the tale of a dystopian world where creativity, individualism and music itself are outlawed — Peart was a reader of Ayn Rand — only to have things unravel when someone discovers an abandoned guitar. It was an extraordinary effort and fans responded in droves. FILE – This April 18, 2013 file photo shows, from left, Alex Lifeson, Neil Peart, and Geddy Lee of Rush at the Rock and Roll Hall of Fame Induction Ceremony in Los Angeles. Peart, the renowned drummer and lyricist from the band Rush, has died. His rep Elliot Mintz said in a statement Friday that he died at his home Tuesday, Jan. 7, 2020 in Santa Monica, Calif. He was 67. (Photo by Jordan Strauss/Invision, File)

Peart Was Also an Author and Published Six Books

Lee described working with Peart’s lyrics during a 2018 interview with The Guardian: “Being an interpreter for Neil has been a singular pleasure of mine and a really difficult job at the same time, because I’m not always on the same page as him. As we grew as a band, I became trusted by him to be his sounding board and his editor, and if I couldn’t get into a thing, he would leave it alone. That’s the beauty of a relationship that lasts.”
Rush’s most successful album was 1981’s “Moving Pictures,” which sold four million copies. The album featured “Tom Sawyer” and “YYZ” — a track that served as a showcase for Peart during live shows and secured Rush its first-ever Grammy nomination; the band would earn seven nominations over time. 1990’s “Chronicles” was a double platinum success; 11 of the band’s albums were certified platinum and 10 albums reached gold status.
Peart was also an author and published six books. At one point in the 1990s, he took jazz drumming instruction, explaining to Classic Rock: “After 40, 45 years of playing, I wanted to push myself and open up this whole new frontier. I’ve been able to do that as a lyricist and as a prose writer, and now as a drummer. You have to challenge your own limitations and your own expectations of yourself.”
In 2015, Peart announced he was retiring from touring, saying he was struggling with ailments and concerned he would not be able to play in top form.


“Today the world lost a true giant in the history of rock and roll. An inspiration to millions with an unmistakable sound who spawned generations of musicians (like myself) to pick up two sticks and chase a dream. A kind, thoughtful, brilliant man who ruled our radios and turntables not only with his drumming, but also his beautiful words.” — Dave Grohl
High-profile musicians were among the fans of Peart and Rush who paid tribute on social media.

“Today the world lost a true giant in the history of rock and roll. An inspiration to millions with an unmistakable sound who spawned generations of musicians (like myself) to pick up two sticks and chase a dream. A kind, thoughtful, brilliant man who ruled our radios and turntables not only with his drumming, but also his beautiful words,” Dave Grohl, who inducted Rush into the Rock Hall, said in a statement Friday. “I still vividly remember my first listen of ‘2112’ when I was young. It was the first time I really listened to a drummer. And since that day, music has never been the same. His power, precision, and composition was incomparable. He was called ‘The Professor’ for a reason: we all learned from him.”
Jack Black tweeted, “The master will be missed — Neil Peart RIP #RushForever.” Gene Simmons called Peart “a kind soul,” while Chuck D of Public Enemy recalled being inducted into the Rock Hall on the same night as Rush, saying backstage he and Peart shared “a unique moment without much word. Rest in Beats my man.”
Slash, Bryan Adams, Paul Stanley and Questlove of The Roots also paid tribute to Peart.
“Thank you for inspiring me and for all your help and advice along the way, especially in the early days when you took the time to talk to a young green Danish drummer about recording, gear and the possibilities that lay ahead,” Metallica’s Lars Ulrich wrote on Twitter. “Thank you for what you did for drummers all over the world with your passion, your approach, your principles and your unwavering commitment to the instrument! Rest In Peace.”
Peart is survived by his wife, Carrie, and their daughter, Olivia Louise Peart.