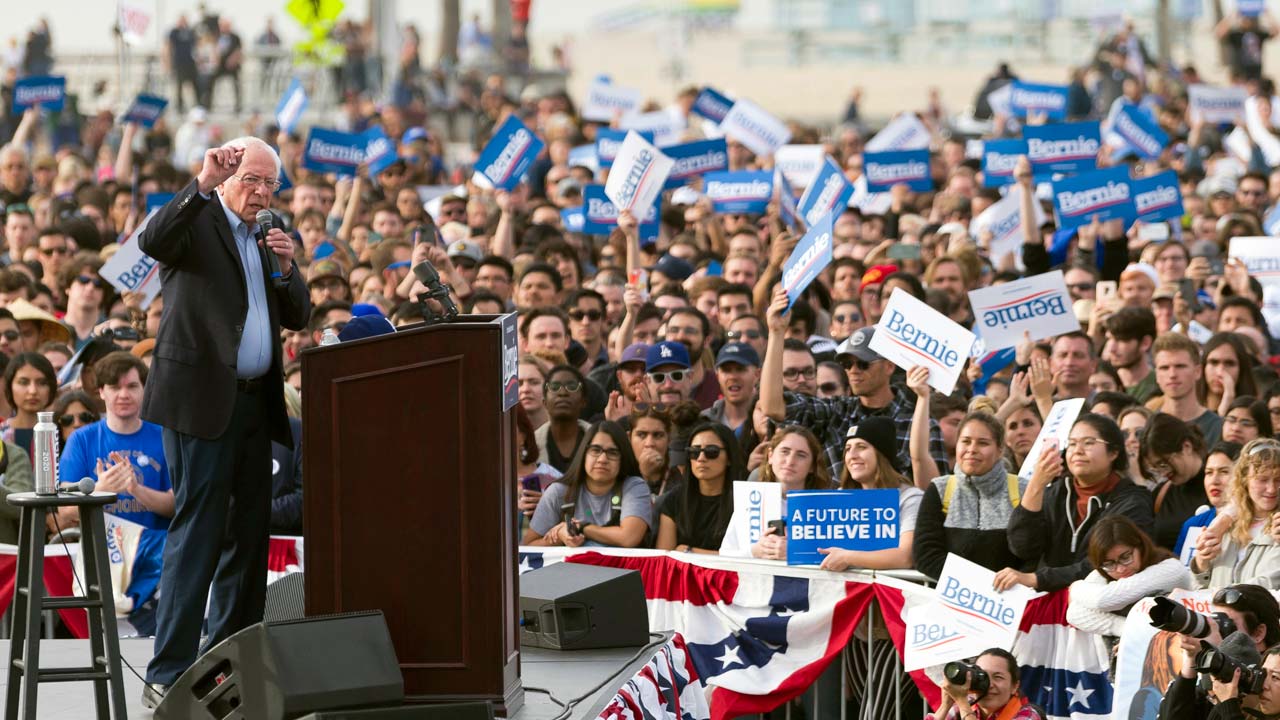 SACRAMENTO — In the battle for the Democratic presidential nomination, no prize is bigger than California, which offers more delegates than any other state. And as candidates plot their strategies here, there’s an overlooked group of voters who could be key to victory: independents.
More than 5 million voters not registered in a party are eligible to participate in California’s March 3 Democratic primary, the second most of any state that votes on Super Tuesday, after Texas. These voters flexed their power during the 2018 midterms, helping California Democrats flip seven U.S. House seats long held by Republicans.
Such a vast pool of potential supporters is a tantalizing prospect for any White House hopeful. But tapping them won’t be easy because of complicated election rules and the unfamiliarity many voters have with participating in presidential primaries so early in the contest. Success will require candidates to have a sophisticated organization in California even as they spend much of their time focusing on the early voting states that will kick off the primary season next month.
“It’s the critical X-factor in a California presidential primary,” said Ace Smith, a political consultant who helped run California Sen. Kamala Harris’ presidential campaign last year and led Hillary Clinton’s 2016 California operation.

So far, Vermont Sen. Bernie Sanders and billionaire Michael Bloomberg have been most aggressive in pursuing independents. Sanders, the independent senator who has thrived on anti-establishment enthusiasm, is urging his California supporters to become Democrats, despite the fact that they can vote for him as independents. At a December rally, he walked the audience through changing their voter affiliation, telling them to use the secretary of state’s website.
His campaign argues that this approach ensures voters get the ballots they need, rather than having to take additional steps, as independents must. Californians can change their party registration until Feb. 18. The campaign is also adding a feature on its mobile app that will let supporters look up the party registrations of friends and family, so that they can send them instructions on how to vote for Sanders.
“They’re a very important block of voters,” said Rafael Návar, who runs Sanders’ California campaign. “They’re the base that is going to be supportive of the politics of the senator.”
Bloomberg is essentially ceding the traditional early voting states of Iowa, New Hampshire, Nevada and South Carolina to stake his campaign — and his vast wealth — on a strong Super Tuesday showing.
“We’re building the largest field and outreach effort in California presidential primary history, including an extensive effort to ensure that non-affiliated voters can have their voice heard in choosing the next Democratic nominee,” Bloomberg’s California spokesman Drew Godinich said in an emailed statement. He declined to provide more details.

A spokeswoman for Pete Buttigieg, the former mayor of South Bend, Indiana, said the campaign is reaching out to independents across the country generally but not doing anything specific to educate Californians on how to pull Democratic ballots. A spokeswoman for Tom Steyer, the California philanthropist, said independents are supporting Steyer, but she provided no details on outreach efforts.
Representatives for former Vice President Joe Biden and Massachusetts Sen. Elizabeth Warren didn’t answer questions about their efforts to target these voters.
While they are eligible to vote in the Democratic primary, independents must take steps to do so. Those who show up at a polling place will be given an option to get a ballot for the Democratic primary. But the roughly 4 million independents who are expected to vote by mail must affirmatively ask for a ballot, either by returning a form in the mail, calling or emailing county elections officials.
As of last week, just 8% of independents who vote by mail had asked for a ballot in the presidential primary, according to data collection by Paul Mitchell, who runs the nonpartisan Political Data Inc., which collects and sells voter data to campaigns. Not all counties had reported data.

Complicating matters is the fact that for most elections, Californians are accustomed to open primaries in which all the candidates appear on the same ballot, regardless of party. Many may not know that the presidential race runs differently. The state also moved up its primary from June to March, and the earlier voting could catch some people by surprise.
Other Super Tuesday states also have a patchwork of voting rules that campaigns must understand.
Minnesota will hold its first presidential primary since 1992. Early voting there begins on Jan. 17, and some voters could face confusion. While voters don’t have to declare party affiliation for state primaries, they will have to pick a side for the presidential contest.
Colorado, meanwhile, has taken a different approach and will mail every independent voter a ballot for both the Democratic and Republican primaries, letting them choose which to vote in.

Millions of Voters ‘Just There for the Taking’

Despite the complexities, strategists say it will pay off for candidates to pay attention to independents, especially in voter-rich states like California.
Candidates must earn support from 15% of voters in a congressional district to gain the delegates that will determine who wins the nomination. And since California has more congressional districts than any other state, independents could make the difference between clinching much-needed delegates or leaving the state empty-handed.
“If they’re targeting certain congressional districts, they’re not having to beat their opponent by 100,000 votes,” Mitchell said. “Delegates are going to be won on the margins up and down the state.”
In California, 240,000 independents cast ballots in the 2016 primary between Sanders and Clinton. Four years later, there are twice as many independent voters in the state, and most are likely to vote Democratic in the general election.
“It’s really millions of potentially disenfranchised primary voters who are just there for the taking if you can identify them and turn them out,” said Dan Newman, a California political consultant who previously worked at a firm that ran Clinton’s campaign in the state.

Under Pressure, Iran Admits it Shot Down Jetliner by Mistake