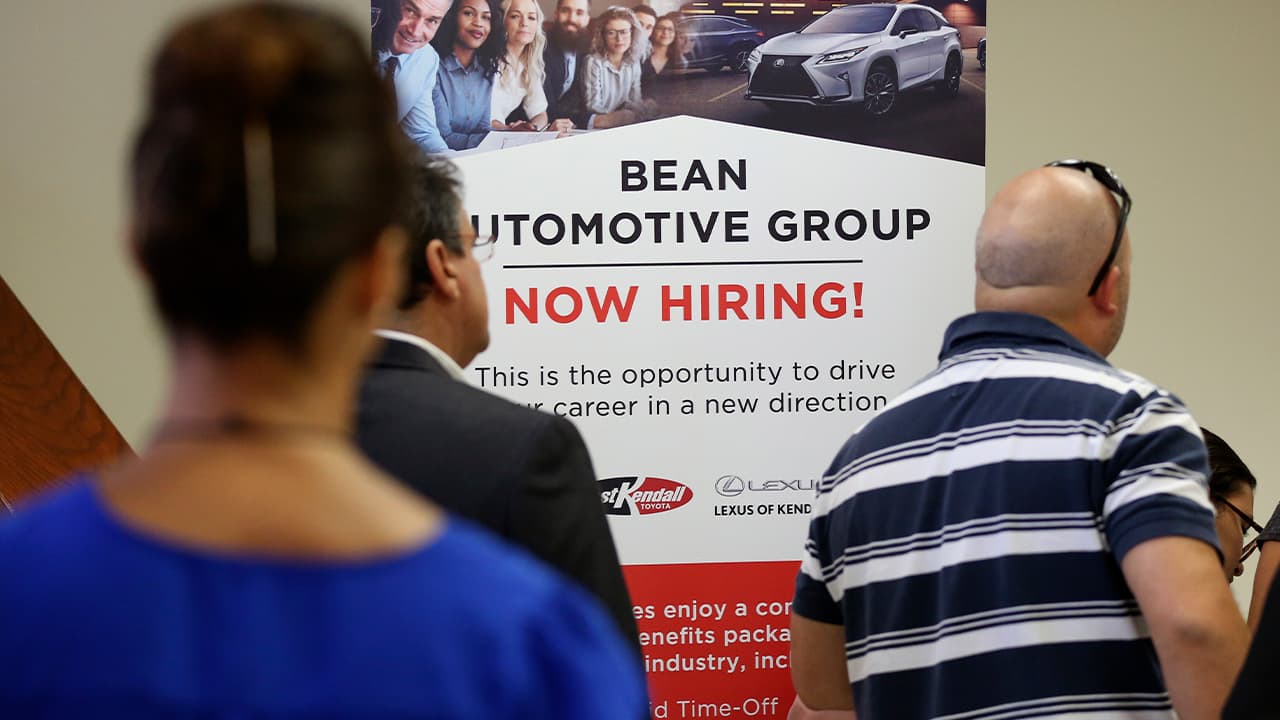 WASHINGTON — U.S. employers added 145,000 jobs in December and the unemployment rate held steady at 3.5%, signaling that the job market remains strong at the start of 2020 even if hiring and wage gains have slowed somewhat more than a decade into an economic expansion.


“We’re starting 2020 in very good shape. We should see continued economic expansion throughout 2020 driven by consumers.” — Gus Faucher, chief economist at PNC Financial Services
Friday’s snapshot from the Labor Department showed hiring slipped from robust gains of 256,000 in November, which were given a boost by the end of a strike at General Motors. For the year, employers added an average of roughly 175,000 jobs per month, compared with about 223,250 per month in 2018.
Annual wage growth fell in December to 2.9%, down from an annualized average of 3.3% a year earlier, a possible sign that some slack remains in the labor market and that unemployment could fall even further from its current half-century low.
The picture of a slowly-but-steadily improving economy – plus low inflation — likely gives the Federal Reserve comfort in keeping interest rates low, which has been a boon to stock markets. The Dow Jones Industrial Average was largely unchanged in Friday morning trading, but it briefly reached the record-level of 29,000.
“We’re starting 2020 in very good shape,” said Gus Faucher, chief economist at PNC Financial Services. “We should see continued economic expansion throughout 2020 driven by consumers.”
The state of the job market has become a pivotal division between President Donald Trump and his Democratic challengers. Trump can campaign on the low unemployment rate and job growth as he seeks a second term. Democrats, seeking to oust him, will point to wages that have not taken off in a meaningful for many Americans coping with highs costs for medical care and higher education. FILE – In this Oct. 1, 2019, file photo, Gabriel Picon, right, talks with a representative from GameStop during a job fair at Dolphin Mall in Miami. On Friday, Jan. 10, the U.S. government issues the December jobs report. (AP Photo/Lynne Sladky, File)

The Pace of Annual Average Wage Growth Slowed in December

This is the last jobs report before the Iowa caucus in February that will serve as a first step for choosing the Democratic presidential nominee.
The prospect of a stable job market, a pick-up in global growth, supportive central banks, an easing of trade tensions and U.S. economic growth of around 2% should be a positive for this year.
“We really have the wind at our backs going into 2020,” said Julia Pollak, a labor economist at the employment marketplace ZipRecruiter.
Yet job growth has failed so far to translate into substantially better hourly pay. The pace of annual average wage growth slowed in December to 2.9% from 3.3% a year ago, a possible sign that there is still room for additional job gains despite the decade-plus expansion that has reduced the number of unemployed Americans. There is also the potential that wages jumped in January as many states adjusted their minimum wages.
Some businesses in competitive industries are already taking steps to prepare for wage competition this year. The Big Blue Swim School based in Chicago vies with day cares, learning centers and gyms for its instructors. The chain has five sites employing on average 30 people and plans to open five more schools this year and 17 in 2021. But it had to dramatically boost wages in order to attract staff for that expansion.

“We gave all of our front-line employees a 10% or 11% raise because of the fear we have about the wage pressures in the economy,” said CEO Chris Kenny. “We can’t meet our business goal without great staff.”


“We gave all of our front-line employees a 10% or 11% raise because of the fear we have about the wage pressures in the economy. We can’t meet our business goal without great staff.” — CEO Chris Kenny
The U.S. economy added 2.1 million jobs last year, down from gains of nearly 2.7 million in 2018. Hiring may have slowed because the number of unemployed people seeking work has fallen by 540,000 people over the past year to 5.75 million. With fewer unemployed people hunting for jobs, there is a potential limit on job gains.
The steady hiring growth during the expansion has contributed to gains in consumer spending. Retail sales during the crucial holiday shopping improved 3.4% compared to the prior year, according to Mastercard SpendingPulse. This likely contributed to a surge of hiring in retail as that sector added 41,200 jobs in December.
The leisure and hospitality sector — which includes restaurants and hotels — added another 40,000 jobs. Health care and social assistance accounted 33,900 new jobs.
Still, the report suggests a lingering weakness in manufacturing.
Factories shed 12,000 jobs in December, after the end of the GM strike produced gains of 58,000 in November. Manufacturing companies added just 46,000 jobs in all of 2019.
Manufacturing struggled last year because of trade tensions between the United States and China coupled with slower global economic growth. Safety problems at Boeing have also hurt orders for aircraft and parts.