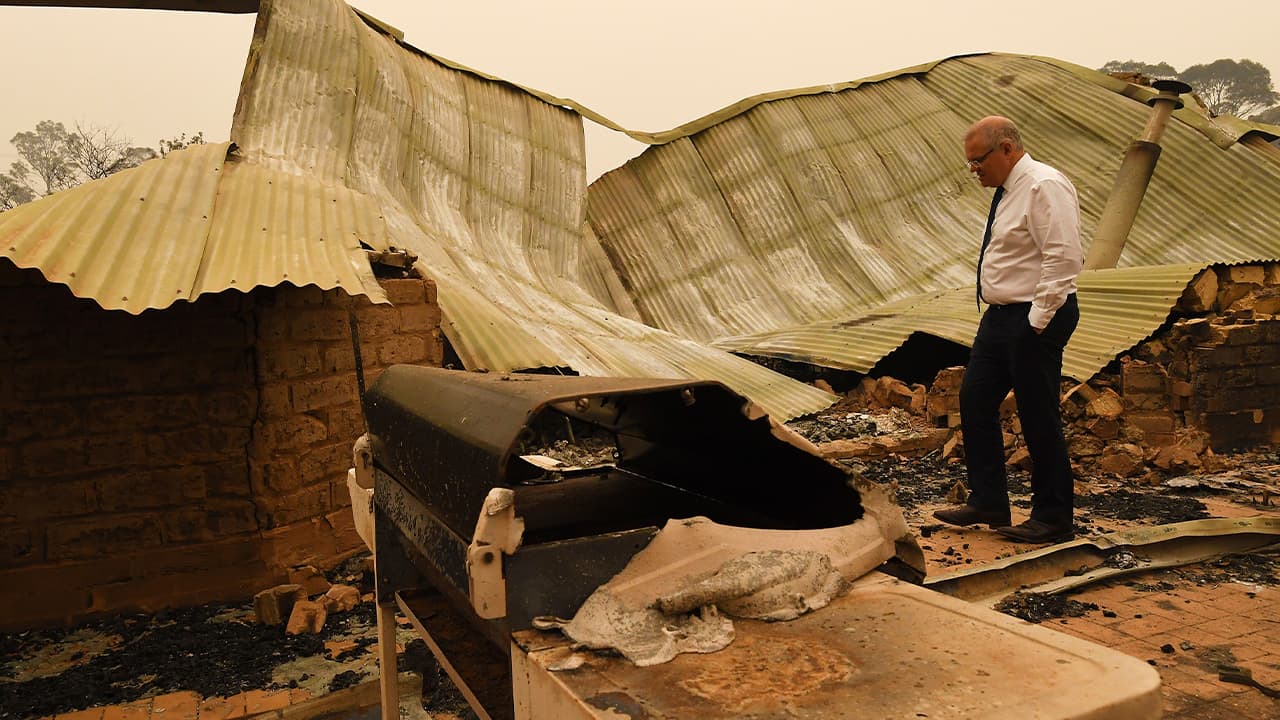 CANBERRA, Australia — As his country burned, Australia’s prime minister was cursed and jeered out of a town, called an “idiot,” a “moron” and worse, and skewered at home and abroad for his dismissive response toward climate change.

Protesters Surrounded His Home in Sydney

The Hawaii vacation also created the appearance of Morrison fleeing the smoke and flames that thousands of ordinary Australians who bravely volunteer as firefighters were running toward. Those volunteers include high-profile Sydney fire truck driver Tony Abbott, a former prime minister whom Morrison as a power broker in their Liberal Party helped oust in 2015.
Protesters, outraged at Morrison’s absence during the crisis and his inaction on climate change, surrounded his home in Sydney. Memes mocking the prime minister flooded social media. A local retailer began selling Hawaiian shirts bearing Morrison’s face, with proceeds going toward firefighting efforts.
Under siege, Morrison announced he was cutting short his vacation to lead the government after two volunteer firefighters died protecting neighbors’ homes. But the damage was done.
Jackson likened the Hawaii fiasco to Bush’s decision to continue his vacation after Hurricane Katrina devastated New Orleans in 2005. The former U.S. president’s reputation was wounded by his failure to respond faster.
“Bush was at least in the country, albeit flying over looking out the window,” Jackson said, referring to an enduring image of the president surveying the damage in New Orleans far below Air Force One.
“Being overseas didn’t help” Morrison, Jackson added.
Back from Hawaii, criticism of Morrison’s clumsy leadership continued.
He was seen on video offering to shake the hand of a reluctant woman in the all-but-destroyed New South Wales township of Cobargo. When she did not take his hand, he used his left hand to draw her right hand forward and shook it with his right, leaving many Australians with the impression that all he cared about was a photo opportunity. Smoke and rain mist mix in air as cattle graze below burnt grass fields near Milton, Australia, Sunday, Jan. 5, 2020. The deadly wildfires, which have been raging since September, have already burned about 5 million hectares (12.35 million acres) of land and destroyed more than 1,500 homes. (AP Photo/Rick Rycroft)

Critics Argue He Should Take Some of the Feedback to Heart

“You won’t be getting any votes down here!” one local later shouted at him. “You are out!”
Morrison brushed off abuse by locals who complained of a lack of government support, arguing the insults were not meant as personal attacks.
“I don’t take it personally,” Morrison told reporters later. “I just see it as a sense of frustration and hurt and loss and anger that is out there about what is the ferocity of these natural disasters.”
Critics argue he should take some of the feedback to heart.
His Liberal Party subsequently reacted to complaints of inaction by releasing a 50-second ad on social media that highlighted government contributions of firefighting assets and funding while showing Morrison inspecting fire-ravaged communities. But the ad was initially linked to the party website that prominently invited political donations. The link was removed after public outrage that the party would financially exploit the disaster.
Criticism of Morrison is not limited to Australia; international celebrities have also lobbed insults at him.


“He’s been damaged for sure. Whether he’s been permanently damaged to the point that it might actually hurt the party and his brand going forward — he can rebuild and he can repair the damage to his brand. It is possible.” — Andrew Hughes, an Australian National University expert on marketing and politics
“Pity the poor #Australians, their country ablaze, and their rotten @ScottMorrisonMP saying, “This is not the time to talk about Climate Change. We have to grow our economy.” What an idiot,” entertainer Bette Midler tweeted. “What good is an economy in an uninhabitable country?”
Morrison accepts that human-caused climate change has worsened Australia’s fire risk by extending wildfire seasons, increasing average temperatures and drying the landscape.

The Potential Political Ramifications for Morrison Are Severe

But during an interview on British television earlier this week, junior government lawmaker Craig Kelly ruled out any link between the wildfires and climate change, instead blaming the fires on drought and a lack of controlled burning to reduce the amount of fuel in the countryside. Back in Australia, Kelly’s comments prompted even more anger, and Jackson said they created an impression that the government isn’t listening to the prime minister.
The potential political ramifications for Morrison are severe. None of his four immediate predecessors, including Abbott, managed to serve a full term, being either elected out of office or replaced by their own parties in response to poor opinion polling.
Morrison promised before his government was reelected with a narrow majority in May to serve as prime minister for the full three-year term. And his party tightened its rules after voters voiced frustration that leaders were being chosen internally rather than in elections. But while the government has promised stable leadership, it could easily relax party rules again to oust Morrison if he became a political liability.
Jackson said that even if Morrison survives as leader, he faced hostility over his recent performance from unaligned legislators in the Senate, where the government does not hold the majority of seats needed to pass legislation.
Andrew Hughes, an Australian National University expert on marketing and politics, said Morrison regained some lost political ground on Monday by committing an extra 2 billion Australian dollars ($1.4 billion) toward the fire recovery effort.
“He’s been damaged for sure. Whether he’s been permanently damaged to the point that it might actually hurt the party and his brand going forward — he can rebuild and he can repair the damage to his brand,” Hughes said. “It is possible. But he’ll need to shift that narrative away from how he was during these fires, when he seemed to be either absent or not engaged or not connected enough or not across the issues enough and not showing enough leadership.”