BAGHDAD — Iran vowed “harsh retaliation” for a U.S. airstrike near Baghdad’s airport that killed a top Iranian general who had been the architect of its interventions across the Middle East, and the U.S. announced Friday it was sending more troops to the region as tensions soared in the wake of the targeted killing.

The killing of Gen. Qassem Soleimani, the head of Iran’s elite Quds Force, marks a major escalation in the standoff between Washington and Iran, which has careened from one crisis to another since President Donald Trump withdrew from the 2015 nuclear deal and imposed crippling sanctions.

The killing of Gen. Qassem Soleimani, the head of Iran’s elite Quds Force, marks a major escalation in the standoff between Washington and Iran, which has careened from one crisis to another since President Donald Trump withdrew from the 2015 nuclear deal and imposed crippling sanctions.

The United States said it was sending nearly 3,000 more Army troops to the Middle East and urged American citizens to leave Iraq “immediately” following the early morning airstrike at Baghdad’s international airport that Iran’s state TV said killed Soleimani and nine others. The State Department said the embassy in Baghdad, which was attacked by Iran-backed militiamen and their supporters earlier this week, is closed and all consular services have been suspended.

Around 5,200 American troops are based in Iraq to train Iraqi forces and help in the fight against Islamic State group militants. Defense officials who made the announced about the new troops spoke on condition of anonymity to discuss a decision not yet announced by the Pentagon. U.S. embassies also issued a security alert for Americans in Lebanon, Bahrain Kuwait and Nigeria.

Iran’s Supreme Leader Ayatollah Ali Khamenei warned that “harsh retaliation is waiting” for the U.S. after the airstrike, calling Soleimani the “international face of resistance.” Khamenei declared three days of public mourning and appointed Maj. Gen. Esmail Ghaani, Soleimani’s deputy, to replace him as head of the Quds Force.

Iranian President Hassan Rouhani called the killing a “heinous crime” and vowed his country would “take revenge.” Iran twice summoned the Swiss envoy, the first time delivering a letter to pass onto the United States. 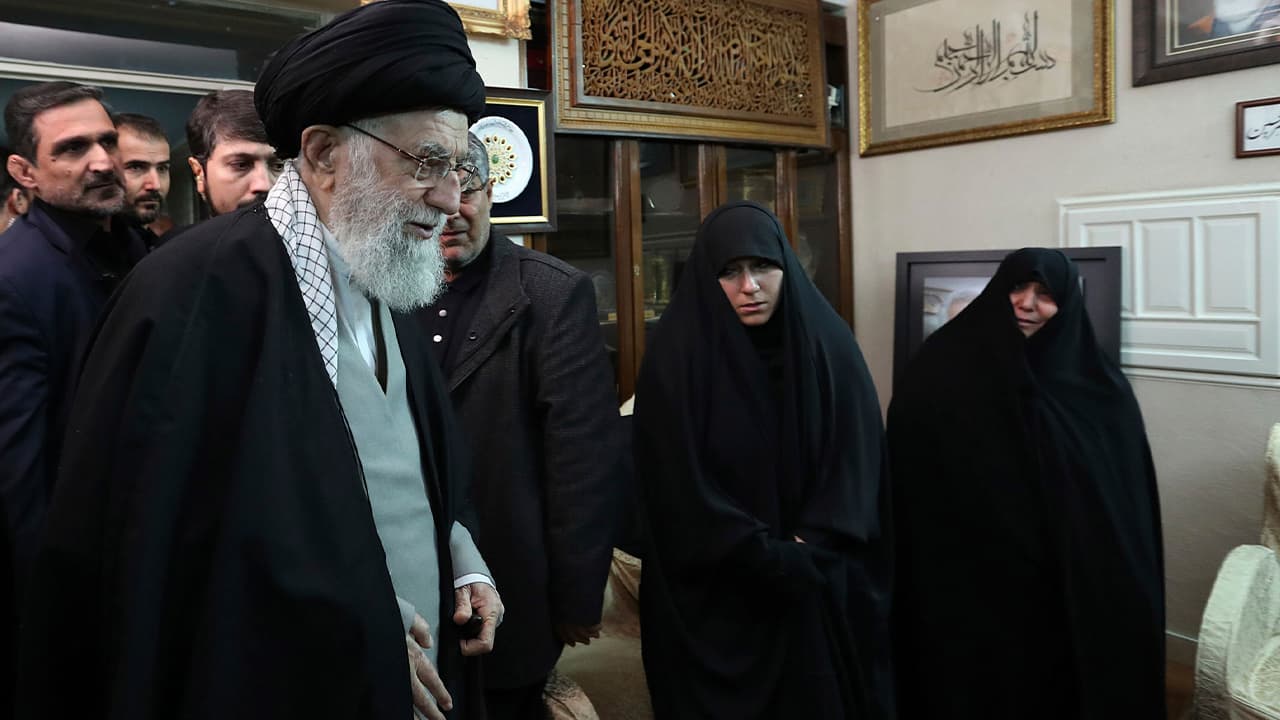 In this picture released by the official website of the office of the Iranian supreme leader, Supreme Leader Ayatollah Ali Khamenei meets family of Iranian Revolutionary Guard Gen. Qassem Soleimani, who was killed in the U.S. airstrike in Iraq, at his home in Tehran, Iran, Friday, Jan. 3, 2020. Iran has vowed “harsh retaliation” for the U.S. airstrike near Baghdad’s airport that killed Tehran’s top general and the architect of its interventions across the Middle East. (Office of the Iranian Supreme Leader via AP)

Thousands of worshippers in the Iranian capital Tehran took to the streets after Friday Muslim prayers to condemn the killing, waving posters of Soleimani and chanting “Death to deceitful America.”

The targeted strike, and any retaliation by Iran, could ignite a conflict that engulfs the whole region, endangering U.S. troops in Iraq, Syria and beyond. Over the last two decades, Soleimani had assembled a network of heavily armed allies stretching all the way to southern Lebanon, on Israel’s doorstep.

However, the attack may act as a deterrent for Iran and its allies to delay or restrain any potential response. Oil prices surged on news of the airstrike and markets were mixed.

Related Story: Oil Prices Jump on Fears of Iranian Retaliation Against Us

The killing promised to further strain relations with Iraq’s government, which is allied with both Washington and Tehran and has been deeply worried about becoming a battleground in their rivalry. Iraqi politicians close to Iran called for the country to order U.S. forces out.

The Defense Department said it killed the 62-year-old Soleimani because he “was actively developing plans to attack American diplomats and service members in Iraq and throughout the region.” It also accused Soleimani of approving the orchestrated violent protests at the U.S. Embassy in Baghdad.

The strike, on an access road near Baghdad’s airport, was carried out Friday by an American drone, according to a U.S. official.

Soleimani had just disembarked from a plane arriving from either Syria or Lebanon, a senior Iraqi security official said. The blast tore his body to pieces along with that of Abu Mahdi al-Muhandis, deputy commander of the Iranian-backed militias in Iraq known as the Popular Mobilization Forces. A senior politician said Soleimani’s body was identified by the ring he wore. Iran’s state TV said Friday 10 people were killed in the airstrike, including five Revolutionary Guard members and Soleimani’s son-in-law, whom he did not identify.

The officials spoke on condition of anonymity because they were not authorized to talk to reporters.

The attack comes at the start of a year in which Trump faces both a Senate trial following his impeachment by Congress and a re-election campaign. It marks a potential turning point in the Middle East and represents a drastic change for American policy toward Iran after months of tensions.

The tensions are rooted in in Trump’s decision in May 2018 to withdraw the U.S. from Iran’s nuclear deal with world powers, struck under his predecessor, Barack Obama.

Since then, Tehran shot down a U.S. military surveillance drone and seized oil tankers. The U.S. also blames Iran for other attacks targeting tankers and a September assault on Saudi Arabia’s oil industry that temporarily halved its production.

Supporters of Friday’s strike said it restored U.S. deterrence power against Iran, and Trump allies were quick to praise the action. “To the Iranian government: if you want more, you will get more,” South Carolina Sen. Lindsey Graham tweeted.

“Hope this is the first step to regime change in Tehran,” Trump’s former National Security Adviser, John Bolton, wrote in a tweet.

Others, including Democratic White House hopefuls, criticized Trump’s order. Democratic presidential candidate Joe Biden said Trump had “tossed a stick of dynamite into a tinderbox,” saying it could leave the U.S. “on the brink of a major conflict across the Middle East.”

Trump, who is vacationing at his private club in Palm Beach, Florida, said in a tweet the airstrike was ordered because Soleimani was “plotting to kill” many Americans. “He should have been taken out many years ago!” Trump tweeted. 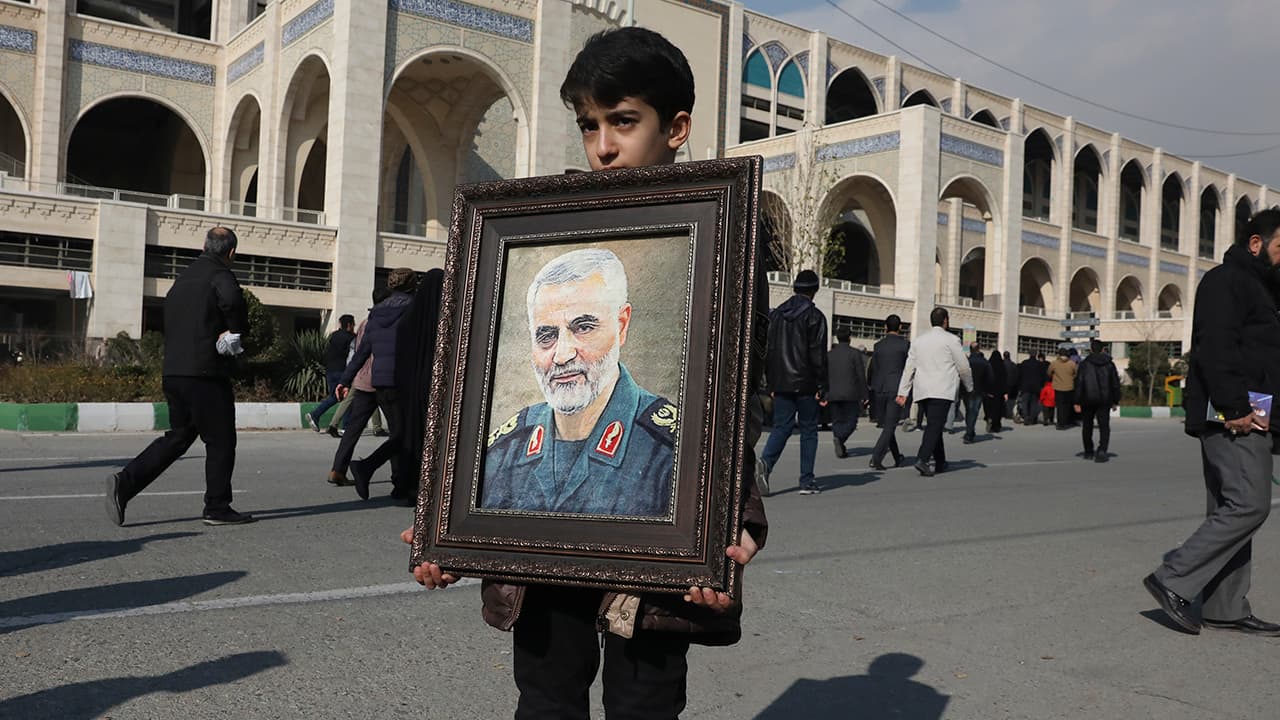 A boy carries a portrait of Iranian Revolutionary Guard Gen. Qassem Soleimani, who was killed in the U.S. airstrike in Iraq, prior to the Friday prayers in Tehran, Iran, Friday Jan. 3, 2020. Iran has vowed “harsh retaliation” for the U.S. airstrike near Baghdad’s airport that killed Tehran’s top general and the architect of its interventions across the Middle East, as tensions soared in the wake of the targeted killing. (AP Photo/Vahid Salemi)

Iran Can Strike Asymmetrically in the Region Through Its Allied Forces

The potential for a spiraling escalation alarmed U.S. allies and rivals alike.

While Iran’s conventional military has suffered under 40 years of American sanctions, Iran can strike asymmetrically in the region through its allied forces like Lebanon’s Hezbollah, Iraqi militias and Yemen’s Houthi rebels. Hezbollah leader Hassan Nasrallah called on “the resistance the world over” to avenge Soleimani’s killing. Frictions over oil shipments in the Gulf could also increase, and Iran’s elite Revolutionary Guard has built up a ballistic missile program.

Iran’s Supreme National Security Council said it in a statement Friday that it had held a special session and made “appropriate decisions” on how to respond, though it didn’t reveal them.

Israeli Defense Minister Naftali Bennett held a meeting with top security officials Friday, but the Israeli military said it was not taking any extraordinary action on its northern front, other than closing a ski resort in the Golan Heights near Lebanon and Syria as a precaution.

The Most Immediate Impact Could Be in Iraq

In the United Arab Emirates, a key U.S. ally in the Gulf, Minister of State for Foreign Affairs Anwar Gargash, called for “rational engagement” and a “calm approach.”

Prime Minister Adel Abdul-Mahdi condemned the strike as an “aggression against Iraq.” An emergency session of parliament was called for Sunday, which the deputy speaker, Hassan al-Kaabi, said would take “decisions that put an end to the U.S. presence in Iraq.”

Emirati political analyst Abdulkhaleq Abdullah said the U.S. strike could help restore confidence among Gulf leaders that Washington will push back against their rival Iran. But, he said, they also don’t want to be caught in the middle. “Is the region ready for a sharp escalation?” he said. “We are the closest to the theater than anyone on earth.”

The most immediate impact could be in Iraq. Funerals for al-Muhandis and the other slain Iraqis were set for Saturday.

Prime Minister Adel Abdul-Mahdi condemned the strike as an “aggression against Iraq.” An emergency session of parliament was called for Sunday, which the deputy speaker, Hassan al-Kaabi, said would take “decisions that put an end to the U.S. presence in Iraq.”

Ordering out American forces would heavily damage Washington’s influence and make the U.S. troop presence in neighboring Syria more tenuous. But Iraq’s leadership is likely to be divided over such a step. President Barham Salih called for “the voice of reason and wisdom to dominate, keeping in mind Iraq’s greater interests.”

On Sunday, U.S. airstrikes killed 25 fighters from an Iranian-backed militia in retaliation for the killing of a U.S. contractor at an American base in a rocket attack the previous week. The strikes prompted two days of protests orchestrated by the militias at the U.S. Embassy in Baghdad, where their supporters breached the compound and set fires, though no one was wounded.