ANKARA, Turkey — Turkey’s parliament on Thursday authorized the deployment of troops to Libya to support the U.N.-backed government in Tripoli that is battling forces loyal to a rival government seeking to capture the capital.

Related Story: Erdogan: Turkey Has Spent $40B to Provide for Syrian Refugees

Turkish lawmakers voted 325-184 at an emergency session in favor of a one-year mandate allowing the government to dispatch troops amid concerns that Turkish forces could aggravate the conflict in Libya and destabilize the region.

The Tripoli-based government of Libyan Prime Minister Fayez Sarraj has faced an offensive by the rival regime in the east and forces loyal to commander Gen. Khalifa Hifter. The fighting has threatened to plunge Libya into violent chaos rivaling the 2011 conflict that ousted and killed longtime dictator Moammar Gadhafi.

Turkish President Recep Tayyip Erdogan said last month that Sarraj requested the Turkish deployment after he and Sarraj signed a deal that allows Ankara to dispatch military experts and personnel to Libya. That deal, along with a separate agreement on maritime boundaries between Turkey and Libya, has led to anger across the region and beyond.

Ankara says the deployment is vital for Turkey to safeguard its interests in Libya and in the eastern Mediterranean, where it finds itself increasingly isolated as Greece, Cyprus, Egypt and Israel have established exclusive economic zones paving the way for oil and gas exploration. 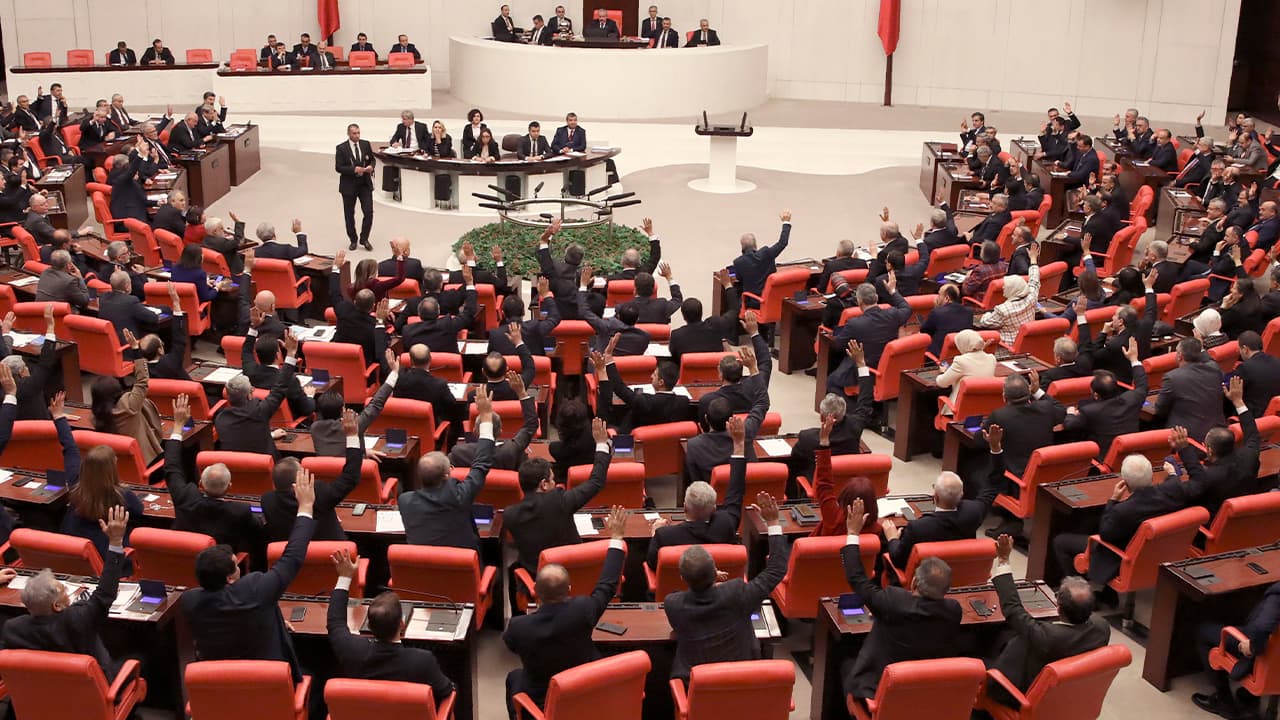 Members of Turkey’s parliament vote to send Turkish troops to Libya to help the U.N.-supported government in Tripoli battle forces loyal to a rival administration in eastern Libya that is seeking to capture the capital, in Ankara, Turkey, Thursday, Jan. 2, 2020. The Turkish lawmakers approved a motion at the emergency session and granted a one-year mandate for the deployment, despite concerns that Turkish forces could aggravate Libya’s conflict further and destabilize the region.(AP Photo/Burhan Ozbilici)

The Government Has Not Revealed Details About the Possible Turkish Deployment

“A Libya whose legal government is under threat can spread instability to Turkey,” ruling party legislator Ismet Yilmaz argued in defense of the motion. “Those who shy away from taking steps on grounds that there is a risk will throw our children into a greater danger.”

“A Libya whose legal government is under threat can spread instability to Turkey. Those who shy away from taking steps on grounds that there is a risk will throw our children into a greater danger.” — ruling party legislator Ismet Yilmaz

The government has not revealed details about the possible Turkish deployment. The motion allows the government to decide on the scope, amount and timing of any mission.

Erdogan and U.S. President Donald Trump held a telephone conversation and discussed the situation in Syria and in Libya, the Turkish president’s office said soon after the vote. A brief statement said they discussed “the importance of diplomacy in solving regional issues.”

Egypt’s foreign ministry condemned “in the strongest language” the Turkish parliament’s authorization to deploy troops, saying Turkey would carry full responsibility for the negative effect it would have on the stability of the Mediterranean region.

Egypt, which neighbors Libya, has backed the regime in the country’s east.

Numan Kurtulmus, deputy chairman of Turkey’s ruling party, welcomed parliament’s vote, telling CNN-Turk television the mandate “will ensure that the legal government in Libya remains in place and Turkey’s natural rights (in the Mediterranean) are maintained.”

He added that the mandate does not mean that “troops will be quickly sent tomorrow to conduct operations.”

Two Other Opposition Parties Voted Against the Motion

Turkish Vice President Fuat Oktay told state-run Anadolu Agency that Turkey would send “the necessary number (of troops) whenever there is a need.” But he also said it would not dispatch forces if Libya’s rival government halts its offensive.

“We cannot throw our soldiers in the line of fire of a civilian war that has nothing to do with our national security.” — Aytun Ciray, a member of the opposition Good Party

Turkey’s main opposition party, CHP, had vowed to vote against the motion arguing that the deployment would embroil Turkey in another conflict and make it a party to the further “shedding of Muslim blood.”

Before the vote, CHP leader Kemal Kilicdaroglu called on the government to work for the establishment of a United Nations peacekeeping force in Libya.

Kurtulmus, the ruling party official, said the mandate does not exclude a peacekeeping force. He said, however, the government believes that U.N. peacekeeping missions were not successful in ending conflicts in the past.

Two other opposition parties voted against the motion.

“We cannot throw our soldiers in the line of fire of a civilian war that has nothing to do with our national security,” Aytun Ciray, a member of the opposition Good Party, said during the parliamentary debate.

However, Erdogan’s ruling party is in an alliance with a nationalist party, and the two held sufficient votes for the motion to pass.

Fighting around Tripoli escalated in recent weeks after Hifter declared a “final” and decisive battle for the capital. He has the backing of the United Arab Emirates and Egypt, as well as France and Russia, while the Tripoli-based government receives aid from Turkey, Qatar and Italy.