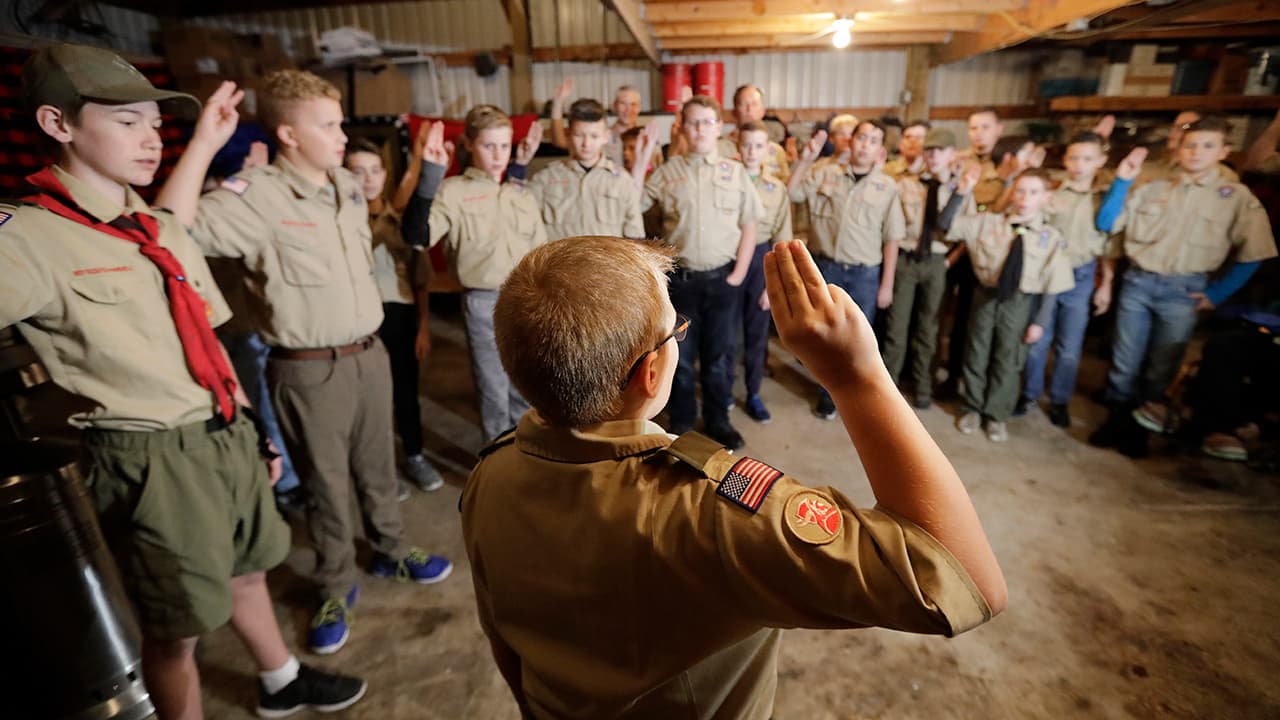 KAYSVILLE, Utah — For decades, The Church of Jesus Christ of Latter-day Saints was one of Boy Scouts of America’s greatest allies and the largest sponsor of troops. But on Jan. 1, the Utah-based faith will deliver the latest blow to the struggling organization when it pulls out more than 400,000 young people and moves them into a new global program of its own.
The change brings excitement and some melancholy for members of the faith and may push the Boy Scouts closer to the brink of bankruptcy as it faces a new wave of sex abuse lawsuits.


The change brings excitement and some melancholy for members of the faith and may push the Boy Scouts closer to the brink of bankruptcy as it faces a new wave of sex abuse lawsuits.
Losing the church will mean about an 18% drop in Boy Scout youth membership compared with last year’s numbers and mark the first time since the World War II era that the figure will fall below 2 million. At its peak in the 1970s, more than 4 million boys were Scouts.
Wayne Perry, a church member who is a past president of Boy Scouts of America and a current member of its national board, said the end of the long-term alliance will sting and force many regional councils in the U.S. West to lay off employees and sell some camps.
However, Perry said he’s hopeful the Boy Scouts can eventually bring back at least 20% of the Latter-day Saints Scouts who liked the experience and want to keep pursuing merit badges in activities ranging from camping and lifesaving to citizenship.
The church’s new youth program will weave in camping and other outdoor activities in parts of the world where that’s feasible, but there won’t be uniforms or a chance to earn the coveted Eagle Scout rank — the highest in Scouting — that was long seen as a key milestone for teenage boys in the church. The focus will be squarely on religion and spiritual development, with youth working toward achievements that earn them rings, medallions and pendants inscribed with images of church temples. ‘There Will Be a Boomerang Effect’

Perry understands why the faith widely known as the Mormon church wants a program it can use worldwide because more than half its members live outside the U.S. and Canada, where the Boy Scouts isn’t available. But he predicts that a heavy emphasis on the gospel may leave some young church members who already go to two-hour church services each Sunday and other Bible studies longing for Boy Scouts.
“One of the advantages we always had with Scouting is that it wasn’t ‘churchy,’” Perry said. “They were getting the Scout oath and the Scout law, which are incredibly compatible with the church’s philosophies and views, but they weren’t reading out of the Book of Mormon.”
“I think there will be a boomerang effect as parents see that there is still a place for Scouting,” he added.
The split between the Boy Scouts and church ends a nearly century-old relationship between two organizations that were brought together by shared values but have diverged in recent years. Amid declining membership, the Boy Scouts of America opened its arms to openly gay youth members and adult volunteers as well as girls and transgender boys, while the church believes that same-sex intimacy is a sin.
“The reality there is we didn’t really leave them; they kind of left us,” high-ranking church leader M. Russell Ballard recently said about the split.
His comment upset Boy Scout officials, Perry said, because the organization went to great lengths to ensure the faith still had robust religious liberty protections after the Scouts welcomed openly gay troop members and leaders — even allowing the church to craft the language.
Perry said the organization will now focus on pitching the benefits of Boy Scouts in parts of the U.S. West with many church members, including Utah, Idaho and Arizona. Previously, every congregation had a Boy Scout troop and boys were automatically signed up.

“We’re going to have to earn our kids,” Perry said.
Church leader Ronald A. Rasband said in an October speech that the faith’s association with Boy Scouts will be an“an important legacy.” In this Thursday, Dec. 12, 2019 photo, a Boy Scouts troop salutes during their meeting, in Kaysville, Utah. For decades, The Church of Jesus Christ of Latter-day Saints was one of Boy Scouts of America’s greatest allies and the largest sponsor of troops. But on Jan. 1, the Utah-based faith will deliver the latest body blow to the struggling BSA when it implements its plan to pull out more than 400,000 youths and move them into a new global program of its own. This Latter-day Saint-based Boy Scouts troop in Kaysville, though, formed outside the church structure and plans to stick with the Boy Scouts after the church ends its longtime alliance at the end of 2019. (AP Photo/Rick Bowmer)

As of 2013, there were more than 430,000 Latter-day Saint boys in the Boy Scouts. The latest tally of the Scouts’ total youth membership was about 2.2 million last year, and its press office confirmed that the church exodus would push that number close to 1.8 million.
The Scouts declined to estimate the financial repercussions of the faith’s departure, saying the church paid a flat fee that varied from year to year, rather than paying based on individual membership fees.
Boy Scout membership has been declining steadily for several decades, due to a variety of factors, including the allure of video games and the proliferation of youth sports leagues. Even with the admission of 150,000 girls, and the extension of the Cub Scout program to kindergartners, there’s been no sign that the decline will end soon.
The split with the church comes at a challenging time for the Boy Scouts, which for years has been entangled in costly litigation with men accusing Scout leaders of abusing them as children. Hundreds of new lawsuits loom after New York, New Jersey, Arizona and California enacted laws making it easier for victims of long-ago abuse to seek damages.
The organization, headquartered in Irving, Texas, says it’s exploring “all available options” to maintain its programs and has not ruled out the possibility of filing for bankruptcy.
Seeking to ease some of the financial pressure, the Scouts announced in October that the annual membership fee for its youth members will rise from $33 to $60, while the fee for adult volunteers will rise from $33 to $36. The news dismayed many local Scout leaders, who had already started registration for the coming year.
Last month, the Scouts confirmed it had mortgaged one of its most spectacular properties, the vast Philmont Scout Ranch in New Mexico, to help secure a line of credit. The organization said it had no plans to sell and is using the land as collateral to help meet financial needs, including rising insurance costs related to sex abuse litigation.
The Scouts says similar liens are in place for its other national properties, including its headquarters in Texas and “high adventure” bases in Minnesota, Florida and West Virginia.