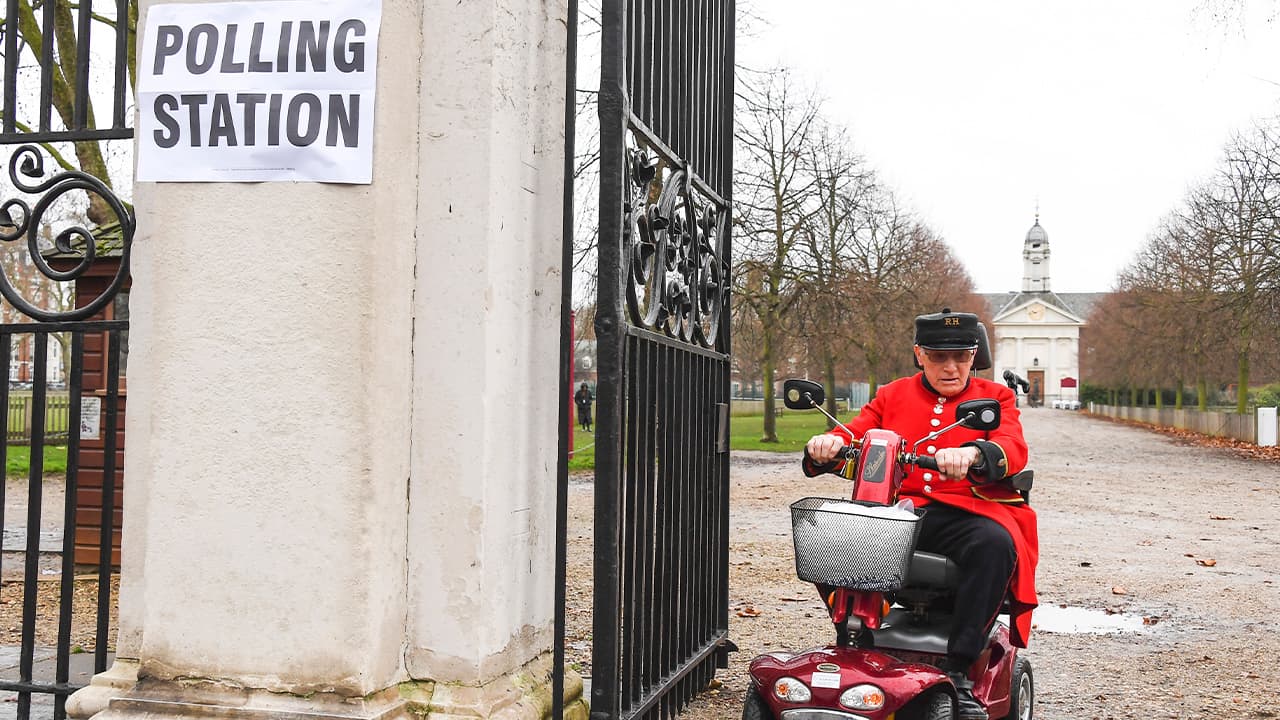 LONDON — Britons who have endured more than three years of wrangling over their country’s messy divorce from the European Union cast ballots Thursday in an election billed as a way out of the Brexit stalemate in the deeply divided nation.

Johnson voted near the prime minister’s Downing Street residence in London, accompanied by his dog, Dilyn. Corbyn was greeted by supporters and an activist dressed as Elmo from “Sesame Street”as he arrived to vote at a school in his north London constituency.
The two parties are offering voters starkly different visions of the future. Johnson campaigned relentlessly on a promise to “Get Brexit done” — and promised a modest increase in public spending — while Labour vowed to tax the rich, nationalize industries such as railroads and water companies and give everyone in the country free internet access.

On Brexit, Labour says it will negotiate a new divorce deal with the EU and then offer voters the choice of leaving the 28-nation bloc on those terms or remaining.
The prime minister pushed for this early election to try to break a logjam in Parliament that stalled approval of his Brexit agreement in October. He says that if he wins a majority, he will get Parliament to ratify his “oven-ready” divorce deal with the EU and take Britain out of the bloc as scheduled on Jan. 31.
Opinion polls have consistently showed the Conservatives in the lead, but recent surveys suggest the margin may have narrowed in the final days of campaigning. While Labour is unlikely to get an outright majority, smaller opposition parties hope to win enough seats so they can team up to block Johnson’s Brexit plans.
Photos of lines at polling stations suggested a brisk early turnout. British opposition Labour Party leader Jeremy Corbyn, centre right and his wife Laura Alvarez leave after voting in the general election in Islington in Islington, London, England, Thursday, Dec. 12, 2019 .U.K. voters are deciding Thursday who they want to resolve the stalemate over Brexit in a parliamentary election widely seen as one of the most decisive in modern times. (AP Photo/Thanassis Stavrakis)

Chris Schofield said more than 70 voters were waiting in the Bermondsey and Old Southwark constituency in London.
“It’s about 20 times busier than it was in 2017, and for the locals and Euro elections,” the 27-year-old consultant told the Press Association news agency. “Atmosphere is very London: orderly queuing and no-one is talking to each other!”
In Glasgow, Simon MacFarlane, a 49-year-old trade union worker, said the election was about more than just Brexit.
“The issues facing the poorest people in Glasgow are no different from the poorest people in Liverpool, Manchester, or elsewhere around the whole of the country and Belfast,” he said. “So, we need to tackle those issues. We have had enough of constitutional politics at this point in time.”
The Conservatives have focused much of their energy on trying to win in a “red wall” of working-class towns in central and northern England that have elected Labour lawmakers for decades but also voted strongly in 2016 to leave the EU. Polls suggest that plan may be working, and the Conservatives also have been helped by the Brexit Party led by Nigel Farage, which decided at the last minute not to contest 317 Conservative-held seats to avoid splitting the pro-Brexit vote.
Labour, which is largely but ambiguously pro-EU, faces competition for anti-Brexit voters from the centrist Liberal Democrats, Scottish and Welsh nationalist parties, and the Greens.
Labour has tried to focus the campaign on the National Health Service, a deeply respected institution that has struggled to meet rising demand after nine years of austerity under Conservative-led governments.

Johnson Has Been Confronted With Past Broken Promises

One of the campaign’s defining images was a photo of a sick 4-year-old boy sleeping on a hospital floor because no beds were available. Johnson’s initial failure to even look at the photo in an on-camera interview put him on the defensive, portraying him as being insensitive to the child’s plight. 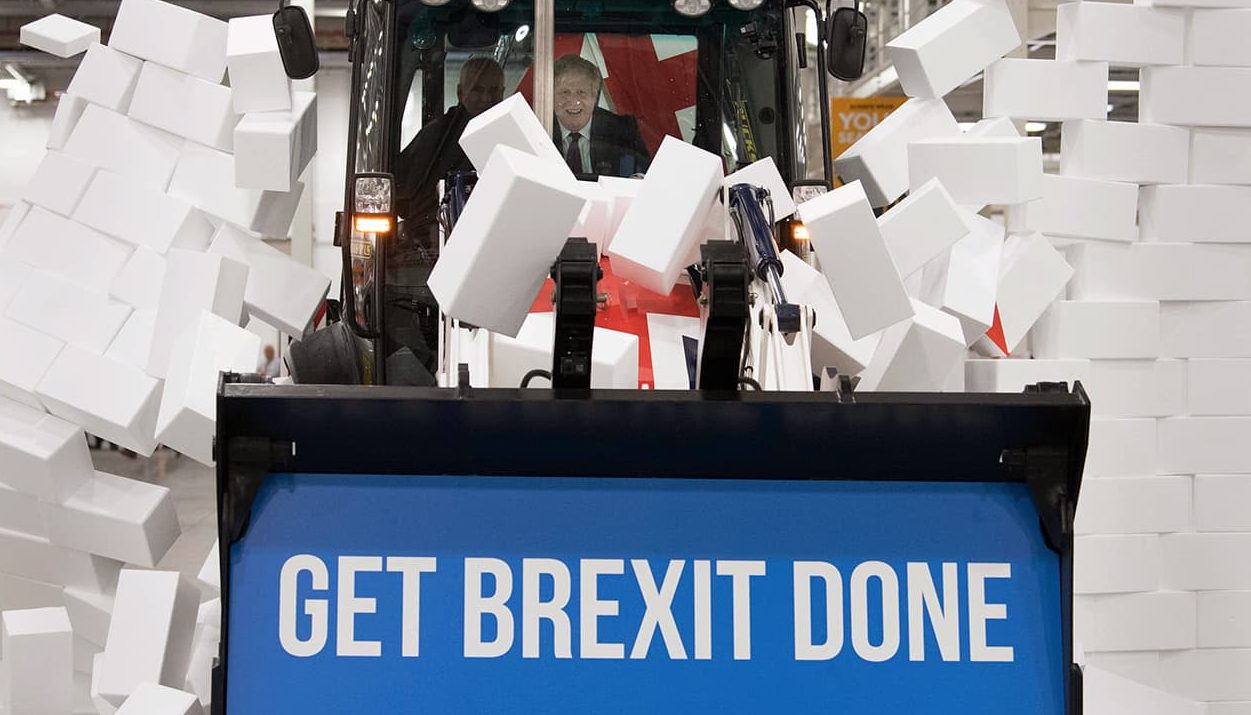 Britain’s Prime Minister Boris Johnson sits in the cab to break through a symbolic wall with the Conservative Party slogan ‘Get Brexit Done’, during an election campaign event at the JCB manufacturing facility in Uttoxeter, England, Tuesday Dec. 10, 2019. The Conservative Party are campaigning for their Brexit split with Europe ahead of the UK’s General Election on Dec. 12. (Stefan Rousseau/PA via AP)

Corbyn has been accused of allowing anti-Semitism to spread within the party. The 70-year-old left-winger is portrayed by opponents as an aging Marxist with unsavory past associations with Hamas and the IRA.
With so much at stake, political parties have pushed the boundaries of truth, transparency and reality during five weeks of campaigning.
Social media platforms were a critical battleground, as the parties bombarded voters with social media messages — many of which were misleading.
The Conservatives, in particular, were criticized for using underhanded tactics on social media. The party circulated a doctored video that made it look as if an opposition leader had been stumped when asked about his position on Brexit. Then during a TV debate, the party re-branded its press office Twitter account as a fact-checking service.

Labour also sought to co-opt the role of independent fact-checker, rolling out a website called The Insider, which urged voters to “trust the facts.”
Rasmus Kleis Nielsen, director of the Reuters Institute for the Study of Journalism at the University of Oxford, said the digital campaign showed that the political landscape had changed.
“You don’t get more establishment than the British Conservative Party,” Nielsen said. “If that is what they see as fit and proper, we must confront the fact that this is the new normal.”

Students in Pajamas, Gifts From Santa at Kirk Elementary