RIYADH, Saudi Arabia — Saudi Arabia’s oil company Aramco gained 10% in its first moments on the stock market Wednesday in a dramatic debut that held until closing and pushed its value up to $1.88 trillion, surpassing Apple as the largest listed company in the world.

Trading on the Saudi Tadawul stock exchange came after a mammoth $25.6 billion initial public offering that set the record as the biggest ever in history, overtaking the $25 billion raised by China’s Alibaba in 2014.

Demand during the book-building period for Aramco’s IPO reached $106 billion with most of that generated by Saudi investment.

At pre-trading auction earlier in the morning, bids for Aramco had already reached the 10% limit on stock price fluctuation allowed by Tadawul. That pushed the price of Aramco shares in opening moments to 35.2 riyals, or $9.39 a share, where it held until closing at 3 p.m.

Despite a stunning attack in September blamed on Iran that struck Aramco’s main crude oil processing facility, the company remains attractive to many local investors.

Aramco is worth more than the top five oil companies — Exxon Mobil, Total, Royal Dutch Shell, Chevron and BP — combined. It also has one of the lowest costs of production, estimated at around $4 a barrel.

Crown Prince Mohammed bin Salman plans to use the money raised from the sale of a sliver of the kingdom’s crown jewel to diversify the country’s economy and fund major national projects that create jobs for millions of young Saudis entering the workforce.

The sale raises capital for the Public Investment Fund overseen by Prince Mohammed, but it is only part of a much larger transformation program to move the economy away from reliance on oil exports for revenue.

What the 34-year-old prince had initially sought was a $2 trillion valuation for Aramco and the sale of up to 5% of the company – on an international stock exchange as well as the Saudi market – that could raise $100 billion.

Rather than float internationally, Aramco sold locally a 1.5% stake – 0.5% to individual retail investors and 1% to institutional investors.

The retail portion was limited to Saudi citizens, residents of Saudi Arabia or nationals of Gulf Arab states. Institutional investors have largely been Saudi and Gulf-based funds, rather than the wider net of international investors the crown prince’s economic diversification plan may need to succeed. 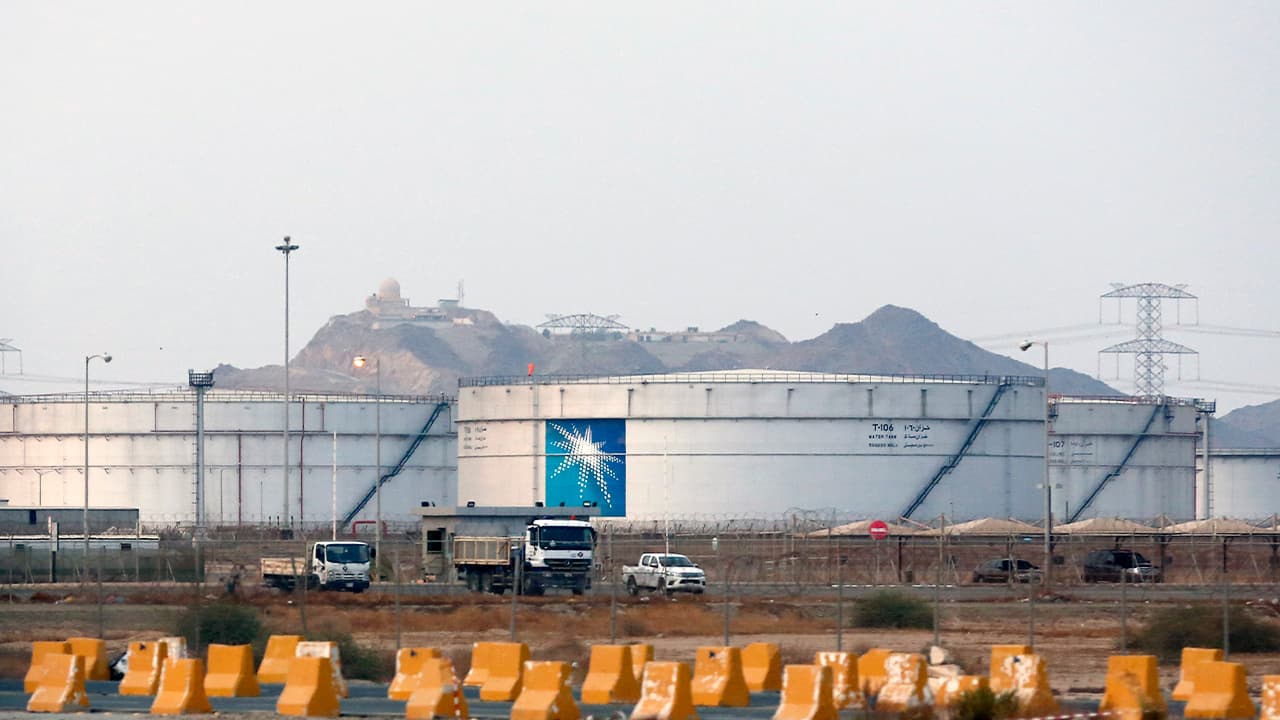 FILE – This Sept. 15, 2019 file photo, shows storage tanks at the North Jiddah bulk plant, an Aramco oil facility, in Jiddah, Saudi Arabia. Saudi Arabia’s state-owned oil company Aramco on Thursday, Dec. 5, 2019, set a share price for its IPO — expected to be the biggest ever — that puts the value of the company at $1.7 trillion, more than Apple or Microsoft. (AP Photo/Amr Nabil, File)

The Success of Aramco’s Flotation Has Hinged on Saudi Investment

Potential buyers outside Saudi Arabia thought the prince’s $2 trillion valuation was too high.

Internationally, investors have been spooked by the geopolitical risks associated with Aramco, as well as the Saudi crown prince’s policies and the stain on the kingdom’s reputation following the killing of Saudi writer Jamal Khashoggi by Saudi agents in Turkey last year.

The success of Aramco’s flotation has hinged on Saudi investment. Non-Saudi investors contributed to just 23% of the institutional investment generated in the IPO, according to lead adviser Samba Capital. Saudi companies and government institutions raised 51% of the overall demand, with public and private funds contributing to the remaining 26%, Samba Capital said.

“They have had to launch the IPO on their own stock exchange as the valuation was unlikely to be achieved elsewhere,” said John Colley, associate dean at Warwick Business School in the U.K.

He said the surging price on launch suggests that buying may be from those affiliated to the crown prince.

Zachary Cefaratti, chief executive officer of Dalma Capital, which manages Saudi equity funds, three of which invested in Aramco, said he anticipates the company could as early as Thursday — on day two of trading — become the first in the world valued at over $2 trillion if the stock gains another 10%.

‘We Actually Believe Geopolitical Risk in Aramco Is Overstated’

“The amount of demand for Saudi Aramco shares has been overwhelming. Much more than could be justified by anyone stating that it’s simply been propped up,” he said.

“A lot of international investors have felt that there should be a discount to Aramco shares due to perceived geopolitical risk. We actually believe geopolitical risk in Aramco is overstated and that the recent September 14th attacks actually demonstrated Aramco’s resilience.” — Zachary Cefaratti, chief executive officer of Dalma Capital, which manages Saudi equity funds

“A lot of international investors have felt that there should be a discount to Aramco shares due to perceived geopolitical risk. We actually believe geopolitical risk in Aramco is overstated and that the recent September 14th attacks actually demonstrated Aramco’s resilience,” Cefaratti added.

In the lead-up to the flotation, there had been a strong push for Saudis, including princes and businessmen, to contribute to what’s seen locally as a moment of national pride, and even duty.

A brief ceremony as trading started on Wednesday saw a countdown in Arabic, the sounding of a bell, a light show with music and applause all around. At the celebration at the Fairmont hotel in Riyadh, Aramco Chairman Yasir Al-Rumayyan, described the sale as “a proud and historic moment for Saudi Aramco and our majority shareholder, the kingdom.” He said it demonstrates further significant progress toward Saudi Arabia’s transformation and economic growth.

Aramco, which has exclusive rights to produce and sell the kingdom’s energy reserves, was founded in 1933 with America’s Standard Oil Co. before becoming fully owned by Saudi Arabia four decades ago.

Oil Prices Are Hovering Around $63 a Barrel

To encourage Saudi citizens to buy and keep hold of Aramco stock, the company says it will pay a dividend of at least $75 billion in 2020. Individual Saudi investors who hold their shares for six months from the first day of trading can also receive up to 100 bonus shares, or one for every 10 held.

The government additionally encouraged Saudis by making it easier to access credit for stock purchases.

The result was that just over 5 million individuals, nearly all of them Saudi nationals out of a population of around 20 million citizens, generated subscriptions of $13 billion.

With oil prices hovering around $63 a barrel, the kingdom needs a break-even oil price of $87 a barrel to balance its budget and climb out of deficit, according to Monica Malik, chief economist at Abu Dhabi Commercial Bank.

One of the biggest expenditures is government salaries for the millions of Saudis that work in the public sector.

Aramco’s flotation could help generate billions of dollars in capital to invest in job-creating projects that benefit private businesses and keep unemployment from rising beyond current levels of roughly 12%.