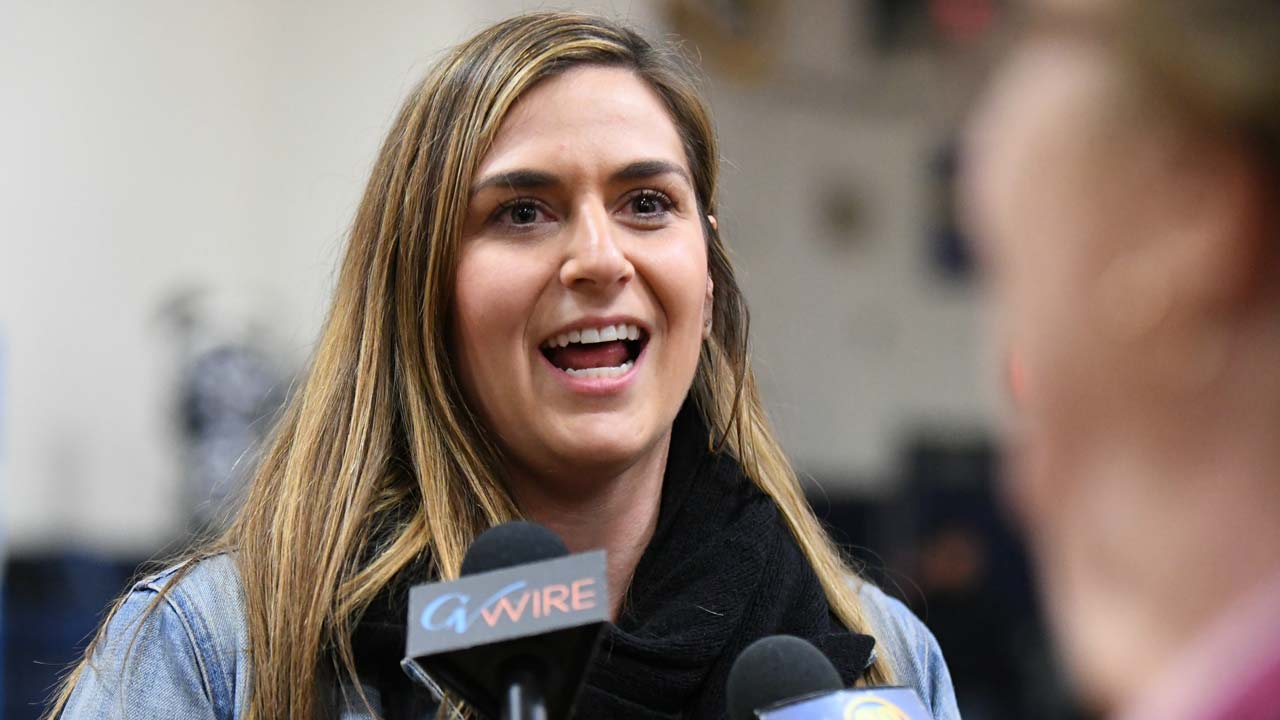 Sunnyside High School teacher Katie McQuone is used to being behind the camera as head of the school’s Video Production Academy. So McQuone was startled Tuesday morning to find cameras suddenly pointing at her during an assembly in the packed school gymnasium, where she was named winner of a $25,000 Milken Educator Award for 2019-20. 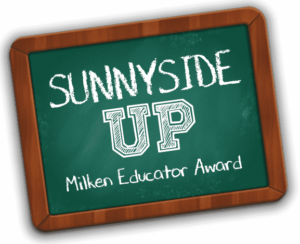 McQuone, a Sunnyside alum, is one of about 40 winners this year of what is called “the Oscars of teaching.”


“It’s really exciting to come here, and now work here with the kids, and show them you can be from southeast Fresno and love your job, and enjoy what you do, and have fun — and win awards!” — Sunnyside High teacher Katie McQuone
She danced in joy after leaving her bleacher seat to accept the award as loud cheers of celebration rang out through the gym. But when it was time to make a speech, she was somewhat at a loss for words, other than to express her thanks.
And how does she plan to use her award money? “Pay off my student loans, yay!” she told reporters with a laugh, adding that she might also use it for a vacation or even Christmas presents.

First A Proposal, Now An Award

It wasn’t the first time she’d been ambushed in her old high school gym with a surprise announcement, McQuone said. “The last time I was in the gym like this, I got proposed to. There were cameras there for that, and I was sitting in the same spot. …”
Winning the award at her alma mater is especially thrilling, McQuone said. “It’s really exciting to come here, and now work here with the kids, and show them you can be from southeast Fresno and love your job, and enjoy what you do, and have fun — and win awards!” 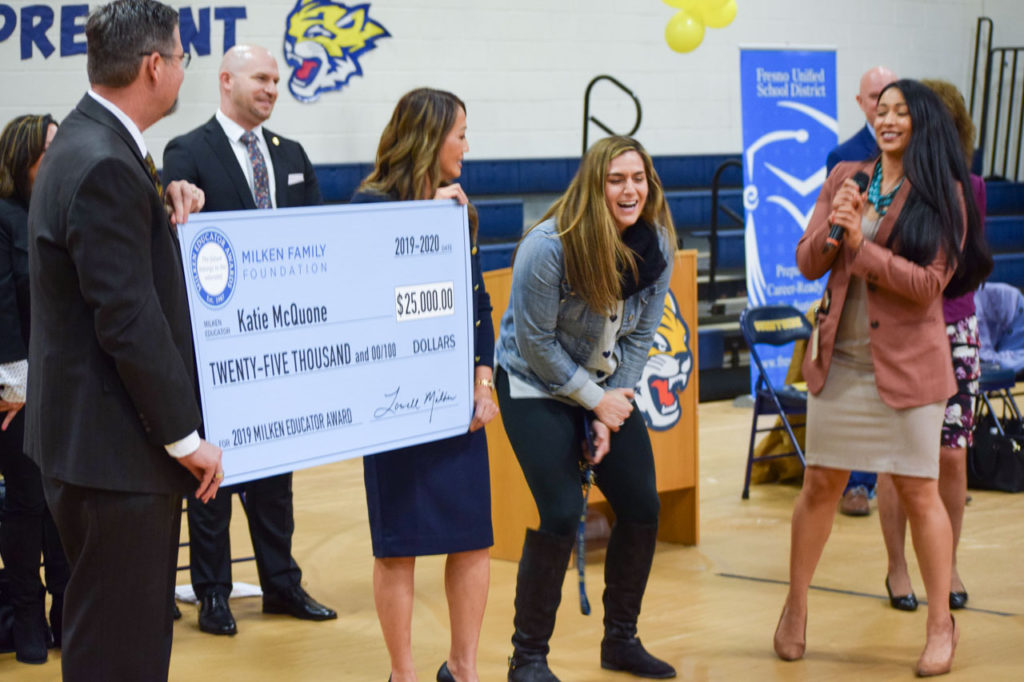 She Came Home to Teach

McQuone graduated in 2009 from San Francisco State University with a bachelor’s degree in radio, television, and electronic media. At Sunnyside, she has taken on many tasks, in addition to leading the Video Production Academy where nearly 100 students learn digital and social media skills and produce daily video news stories for the school’s broadcast.
She sits on the school’s arts and CTE committees, coaches the varsity swim team, and heads the school’s staff and alumni associations, organizing fundraising and appreciation events.
McQuone leads professional development for teachers and teaches evening video production classes as an adjunct instructor at Fresno City College.


“I was a little surprised, but also I wasn’t, because she definitely deserves it. She is an amazing teacher.” — senior Eva Remme

Joining An Elite Class of Educators

Milken Educators are typically in early- to mid-career and are selected for what they have already achieved, and the promise of future accomplishments.
In addition to the $25,000 prize, winners become members of the National Milken Educator Network, will attend a Milken Educator Forum in Indianapolis next March, and will be paired with a veteran Milken Educator mentor to prepare for expanded leadership roles.
The Milken Educators Awards were created by the Milken Family Foundation in 1987 to recognize teaching excellence and promote the teaching profession.

McQuone makes sure her students get hands-on experience: They record theater performances at local elementary schools, shoot video for the Fresno Grizzlies, and work with the Fresno Chaffee Zoo and FAX bus service.
Their stories are featured on a local network affiliate and public television. When they graduate, they all have work-based learning experiences, dual enrollment college credits and often are certified in programs such as Adobe Photoshop. 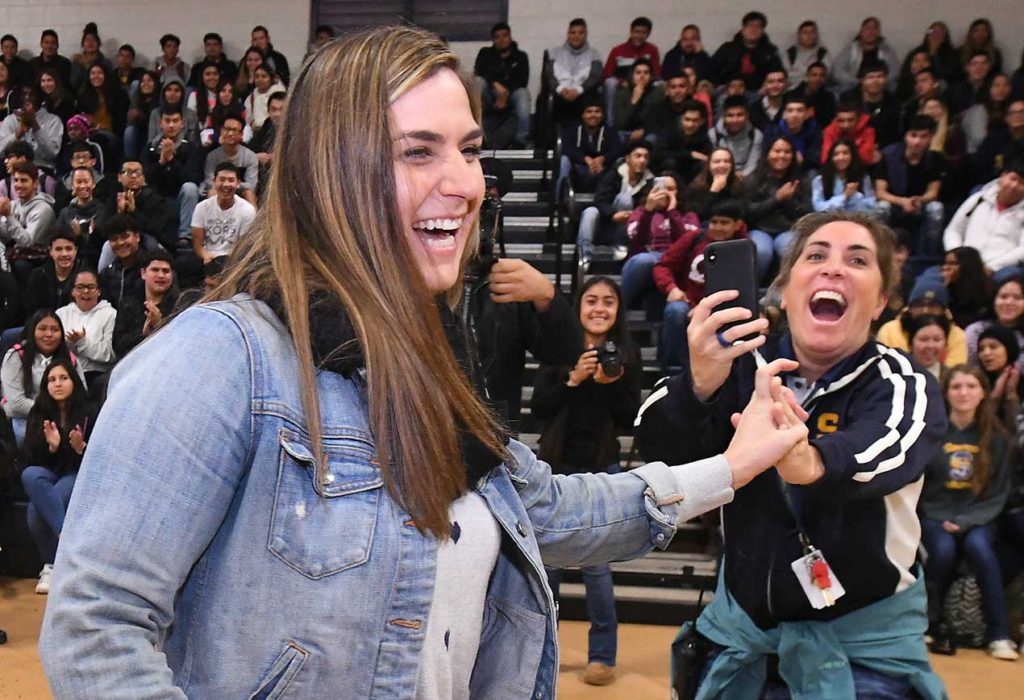 Teacher Katie McQuone high-fives a friend as she prepares to accept her Milken Educator Award on Tuesday at Sunnyside High. (Milken Family Foundation)

McQuone’s video production students waited after the assembly to hug their teacher. Seniors Eva Remme and Vionda Ayala said they weren’t completely surprised by her Milken award.
“I was a little surprised, but also I wasn’t, because she definitely deserves it,” Eva said. “She is an amazing teacher.”


Related Story: These Sunnyside Students All Get College Bids — and Some Go on to Medical ...

McQuone’s impact on students goes beyond teaching video production skills, Vionda said. “I learned how to be a better person, I’ve gone through ups and downs. She’s taught me so much, how life is going to work, what kinds of people are the right kinds of people for myself.”
Vionda said she hopes to major in journalism at Fresno State and is thankful to her teacher for showing her that career path.
“If it wasn’t for McQuone, I never would have thought I would be good for journalism, but she definitely showed me that this is definitely where I should go.”