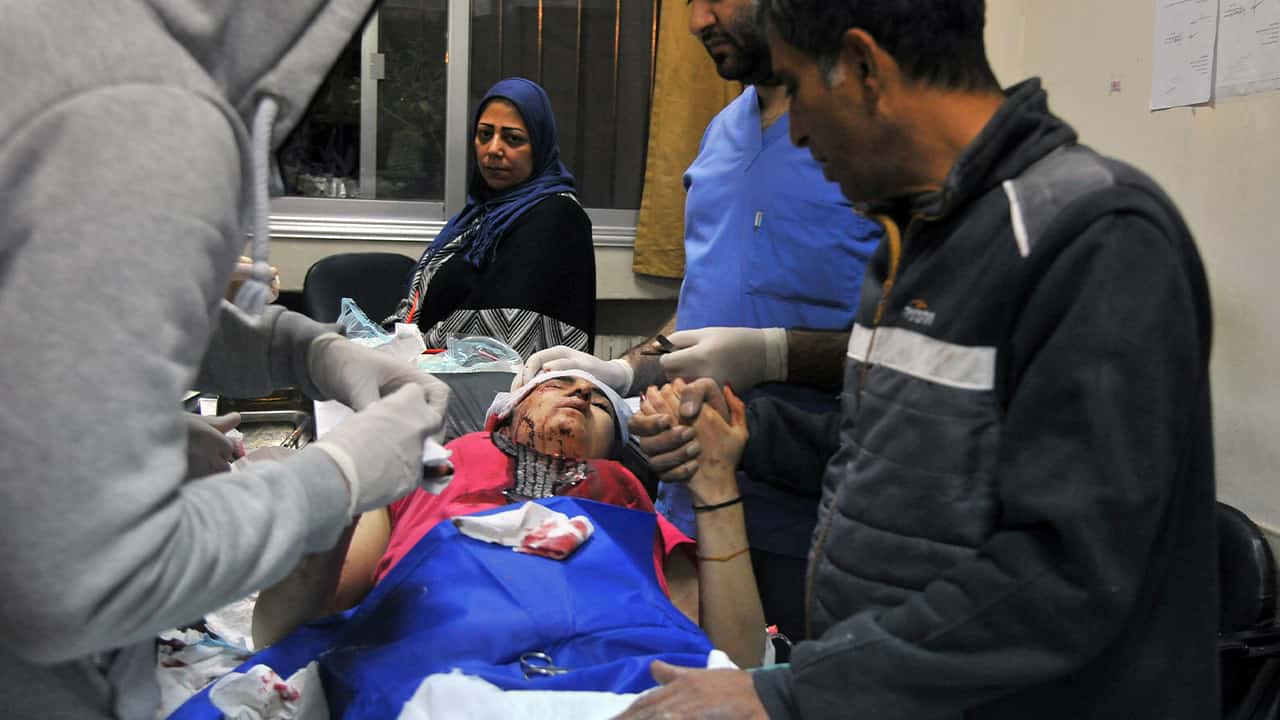 JERUSALEM — Israel said it struck dozens of Iranian targets in Syria on Wednesday in a “wide-scale” operation in response to rocket fire on the Israeli-controlled Golan Heights the day before.

Wednesday’s Strikes on Syria Were the Most Intense Since Jan. 21

The death toll was reported by Rami Abdurrahman, who heads the Britain-based Syrian Observatory for Human Rights, an opposition activist group with a network of contacts across Syria. He said the dead included five Syrian troops, 16 Iranian and Iran-backed fighters, and two Syrian civilians.
The Observatory said the airstrikes targeted Quds Force arms depots in the Damascus suburbs of Kisweh and Qudsaya. Abdurrahman said several other areas were targeted in Wednesday’s strikes, including the Mazzeh air base in Damascus, where air defense units are stationed.
Syria’s state-run SANA news agency said the two civilians were killed by shrapnel when an Israeli missile hit a house in the town of Saasaa, southwest of Damascus. It said several others were wounded, including a girl in a residential building in Qudsaya, also west of the Syrian capital.


Related Story: US Angers Palestinians With Reversal on Israeli Settlements

It claimed that Syrian air defenses destroyed most of the Israeli missiles before they reached their targets.
Wednesday’s strikes on Syria were the most intense since Jan. 21, when Israel claimed responsibility for a series of airstrikes on Iranian military targets in the Arab country, including munition storage facilities, an intelligence site and a military training camp, in response to an Iranian missile attack the previous day.
Israel had said the missile, fired by Iranian forces in Syria, was intercepted over a ski resort on the Golan Heights and that there were no injuries. That Iranian launch followed a rare Israeli daylight air raid near the Damascus International Airport. In this photo released by the Syrian official news agency SANA, a damaged building targeted by Israeli missile strikes is seen in Qudsaya suburb, western the capital Damascus, Syria, Wednesday, Nov. 20, 2019. The Israeli military on Wednesday said it struck dozens of Iranian targets in Syria, carrying out a “wide-scale” strike in response to rocket fire on the Israeli-controlled Golan Heights the day before. (SANA via AP)

Netanyahu Has Issued a Series of Warnings About Iranian Actions

On Tuesday, the Israeli military said it intercepted four incoming rockets from Syria. It said the attack “threatens Israeli security, regional stability and the Syrian regime,” and vowed to “continue operating firmly and resolutely” against Iran in Syria.

Iran Has Forces Based in Syria

Israel’s new hard-line defense minister, Naftali Bennett, issued an equally firm statement.
“The rules have changed: whoever fires on Israel during the day will not sleep at night,” he said. “Our message to the leaders of Iran is simple: you are no longer immune. Any place you dispatch your tentacles, we will chop them off.”
Last week’s airstrike targeting the Islamic Jihad commander in Syria marked a rare assassination attempt against a Palestinian militant in the Syrian capital. The militant, Akram al-Ajouri, survived the attack but his son and granddaughter were killed.

It came the same day as an Israeli airstrike killed a senior Islamic Jihad commander in Gaza, Bahaa Abu el-Atta, settling off the fiercest round of fighting there in years. The fighting killed at least 34 Palestinians and saw more than 450 rockets fired into Israel.
Iran has forces based in Syria, Israel’s northern neighbor, and supports Hezbollah militants in Lebanon. In Gaza, it supplies Islamic Jihad with cash, weapons and training, and also supports Hamas, the Islamic militant group that rules the coastal territory.
Netanyahu claims Iran is using Iraq and far-off Yemen, where Tehran supports Shiite Houthi rebels at war with a Saudi-led coalition backing the government, to plan attacks against Israel.