Israel Heads Toward Unprecedented 3rd Election Within a Year 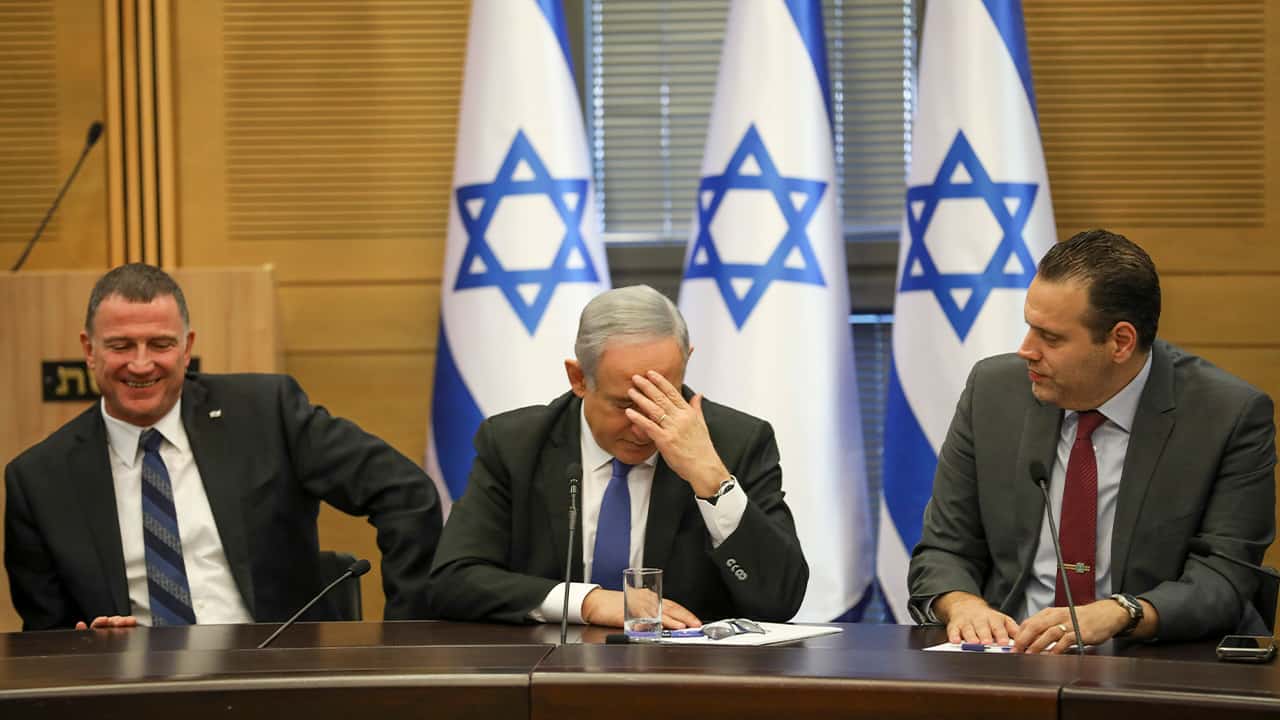 JERUSALEM — Israeli kingmaker politician Avigdor Lieberman on Wednesday refused to endorse a candidate for prime minister, blaming both the contenders engaged in a tense standoff that has paralyzed Israeli politics and pushing the country toward a likely third election in less than a year.
Lieberman’s comments came ahead of a midnight deadline for Prime Minister Benjamin Netanyahu’s rival, Benny Gantz, to form a coalition. Without Lieberman, Gantz appears unable to secure the required majority in parliament to be prime minister.
If Israel is forced into a third election, it would be entering uncharted waters, with opinion polls already predicting a very similar deadlock. But a new campaign could benefit the embattled Netanyahu, who is expected to be indicted on corruption charges in the coming weeks. Netanyahu would be best-positioned to fight any charges from the prime minister’s office.


Related Story: US Angers Palestinians With Reversal on Israeli Settlements

Lieberman, who heads a small secular, ultranationalist party, triggered the September election after refusing to join Netanyahu’s traditional allies of hard-line and religious parties following earlier elections in April. The do-over vote left Netanyahu’s Likud and Gantz’s Blue and White party both short of a required majority in the 120-seat parliament without Lieberman’s support.
Lieberman, who hails from the former Soviet Union, has objected to the outsize influence of ultra-Orthodox religious parties and has urged Netanyahu and Gantz to join him in a unity government as a way out of the stalemate. But Gantz and Netanyahu have refused to bend on their core conditions for such an arrangement.
After weeks of negotiations, Lieberman told reporters he wouldn’t align with either party on its own. FILE – In this May 30, 2019 file photo, former Israeli Defense Minister and Yisrael Beiteinu party leader Avigdor Lieberman speaks to journalists during a press conference in Tel Aviv, Israel. Lieberman has refused to endorse a candidate for prime minister, virtually guaranteeing the country will be forced into a third election in less than a year. Comments by the Israeli kingmaker on Wednesday, Nov. 20, 2019, came ahead of a midnight deadline for Prime Minister Benjamin Netanyahu’s rival, Benny Gantz, to form a coalition. (AP Photo/Oded Balilty, File)

“I made every effort. I turned over every stone,” he said. “There were no significant gaps, they were mainly personal gaps and after it all, at least for now, it seems we are heading for another election.”

With hours to go before Gantz’s deadline, Netanyahu called upon Gantz to join him in forming a unity government.
“I think we must not drag this country into another election,” he said at a Likud faction meeting. “There are amendments that need to be done, there are reforms that need to be done, but at this moment we must do one thing: form a unity government.”
Netanyahu has lambasted Gantz and his fellow former military chiefs in Blue and White for dangling the prospect of a minority government in which Arab lawmakers would provide outside support without officially joining the coalition.

His comments have drawn accusations of racism and incitement, including a speech by Israel’s President Reuven Rivlin, who criticized Netanyahu’s “ugly” comments about Arabs.
A minority government could end Netanyahu’s decade-long grip on power. But the hard-line Lieberman ruled out any alliance with the Arab lawmakers.
Barring a last-minute development, it looks like Gantz will be forced to inform Israel’s president that he has no government to present — just as Netanyahu did before him — setting off the final 21-day period before new elections are called. The past two have been inconclusive and polls indicate the result of a third will not differ significantly.
“The truth must be said: Netanyahu is rejecting unity and will do anything to deteriorate us to a third election within a year,” Gantz wrote on Facebook. “I am ready to make compromises for the benefit of the citizens of Israel but not to cave on our core principles.” Looming above the entire process is the long-expected announcement on Netanyahu’s corruption indictment that could remove him from the equation and potentially provide a long-sought way out of the impasse.

Fresno Is the Heart of California's Tight-Knit Hmong Community