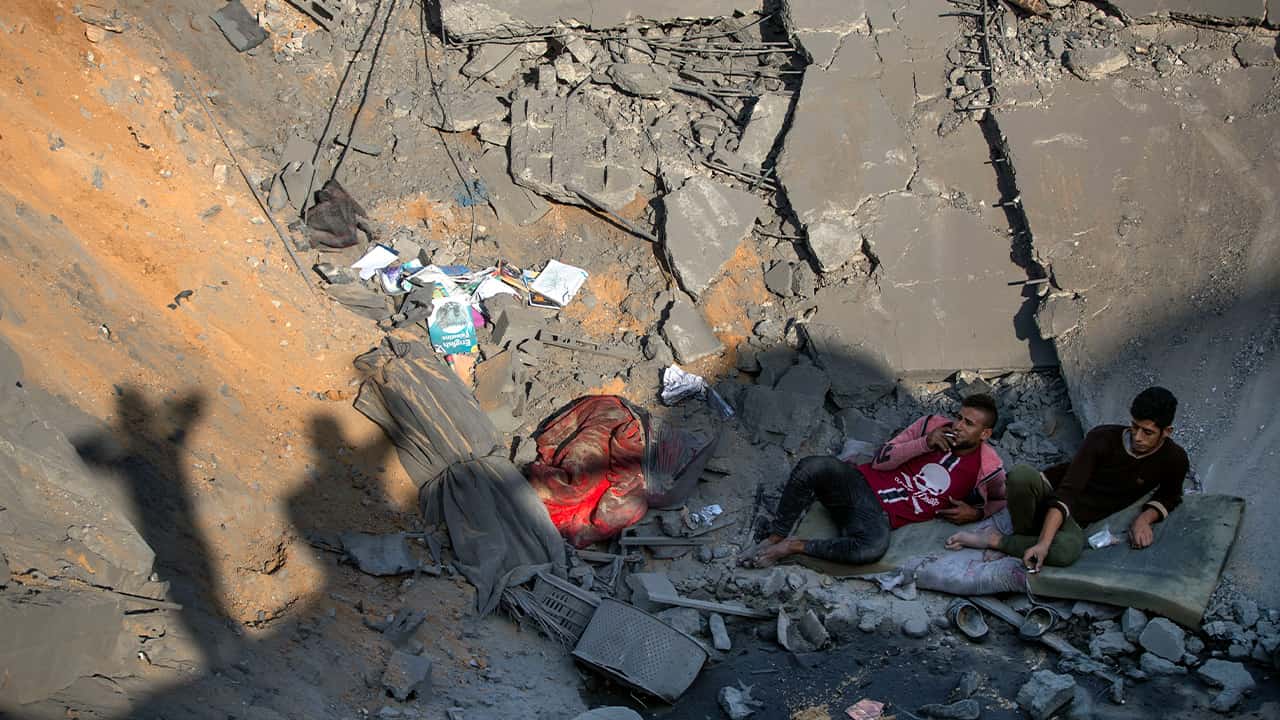 GAZA CITY, Gaza Strip — A cease-fire between Israel and Islamic Jihad militants in Gaza appeared to be holding Thursday despite sporadic rocket fire, after two days of intense fighting that killed at least 34 Palestinians, including three women and eight children, and paralyzed parts of Israel.
Before the truce was announced, a pre-dawn Israeli airstrike killed eight members of the same family in Gaza. Among them were five children, the youngest 7 years old.
It was the deadliest single attack since a bruising 2014 war between Israel and Hamas, the larger militant group that rules Gaza. Islamic Jihad claimed no link to the family and the Israeli military offered no details on the strike.
The fighting began after Israel killed a senior commander of the Iranian-backed militant group who Israel said was behind a string of rocket attacks and was planning a cross-border infiltration. Israel hailed the operation as a victory, defending its policy of targeting militants in their homes despite civilian deaths and vowing to continue the tactic.
Islamic Jihad said it had succeeded in getting Israel to agree to a cease-fire based on several demands, including a halt to targeted killings of the group’s leaders.
Islamic Jihad spokesman Musab al-Berim said the Egyptian-brokered deal went into effect at 5:30 a.m. (0330 GMT). An Israeli military spokesman tweeted that the Gaza operation “is over.” Some restrictions were lifted on residents of southern Israel and traffic returned to the streets of Gaza.

Israel Typically Does Not Publicly Acknowledge Deals With Militant Groups

But after hours of calm, a barrage of five rockets set off air raid sirens in southern Israel. No group claimed responsibility, and Israel did not immediately respond. Sirens sounded again late Thursday, when a rocket fired from Gaza was intercepted by Israeli defenses, the military said.


“The goals of the operation have now been fully achieved.” — Prime Minister Benjamin Netanyahu
The rare targeted killing by Israel sparked the heaviest fighting with Gaza militants since May. Islamic Jihad fired some 450 rockets toward Israel, while Israel responded with scores of airstrikes. However, Gaza’s ruling Hamas stayed out of the latest escalation, adhering to understandings brokered by Egypt after earlier waves of violence.
Israel typically does not publicly acknowledge deals with militant groups, and on Thursday officials said only that Israel would halt fire as long as the militants did the same. The military claimed it had killed some 25 militants and struck a tough blow to Islamic Jihad facilities.
“The goals of the operation have now been fully achieved,” Prime Minister Benjamin Netanyahu said during a tour of a missile defense center.
“Our enemies received the message … We can reach everyone, even in their bed. I hope that this lesson will be learned.”
Palestinian officials said 34 people were killed in the fighting, including at least 18 militants. They say eight children, including a pair of 7-year-olds, and three women were among the dead.
The Abu Malhous family lost eight members when Israeli fighter jets dropped at least two bombs on their ground floor house in Deir al-Balah, in central Gaza. The airstrike flattened the tin-roofed home and pushed it into a large crater, which was littered with clothing, kitchenware and other belongings. Later Thursday, neighbors sifted through the debris as children looked on. Palestinians mourn over the bodies of Rasmi Abu Malhous and seven of his family members who were killed in overnight Israeli missile strikes that targeted their house, in a mosque during their funeral in town of Deir al-Balah, central Gaza Strip, Thursday, Nov. 14, 2019. (AP Photo/Khalil Hamra)

In past wars, Israel has come under heavy criticism from human rights groups for targeting militants’ homes due to the high risk to civilians. Scores of militants’ neighbors and relatives have been killed in such airstrikes.
Neighbors said an Islamic Jihad commander lived in the home that was targeted early Thursday but was not there when it was struck. Instead, his brother and seven other family members were killed. None of them were affiliated with the militant group, said the neighbors, who spoke on condition of anonymity because they did not want to upset the family.
Israeli military spokesman Lt. Col. Jonathan Conricus had no information about the airstrike, but he said Islamic Jihad commanders store weapons in their homes, making them legitimate targets.
“All of our operations were measured, proportionate and focused only on military assets belonging to the Islamic Jihad,” he said.

The rocket fire brought daily life to a halt across southern Israel as nonstop air-raid sirens canceled schools and forced people indoors. At least three people were lightly wounded from shrapnel or shattered glass. Most rockets landed in open areas or were shot down by Israel’s Iron Dome missile defense system.
The Israeli military’s Home Front command tweeted that it was lifting restrictions in certain areas but leaving them in place in the areas surrounding Gaza.
In Gaza, cars returned to the streets as Israeli military drones still buzzed overhead.

Israel Has Repeatedly Targeted Iran-Linked Militants and Facilities in Syria

Late Wednesday, Islamic Jihad’s leader, Ziad al-Nakhalah, announced three conditions for a truce: an end to targeted killings, a halt in Israeli shootings of protesters at weekly demonstrations along the Israeli border and easing a 12-year-old Israeli blockade that has devastated Gaza’s economy.