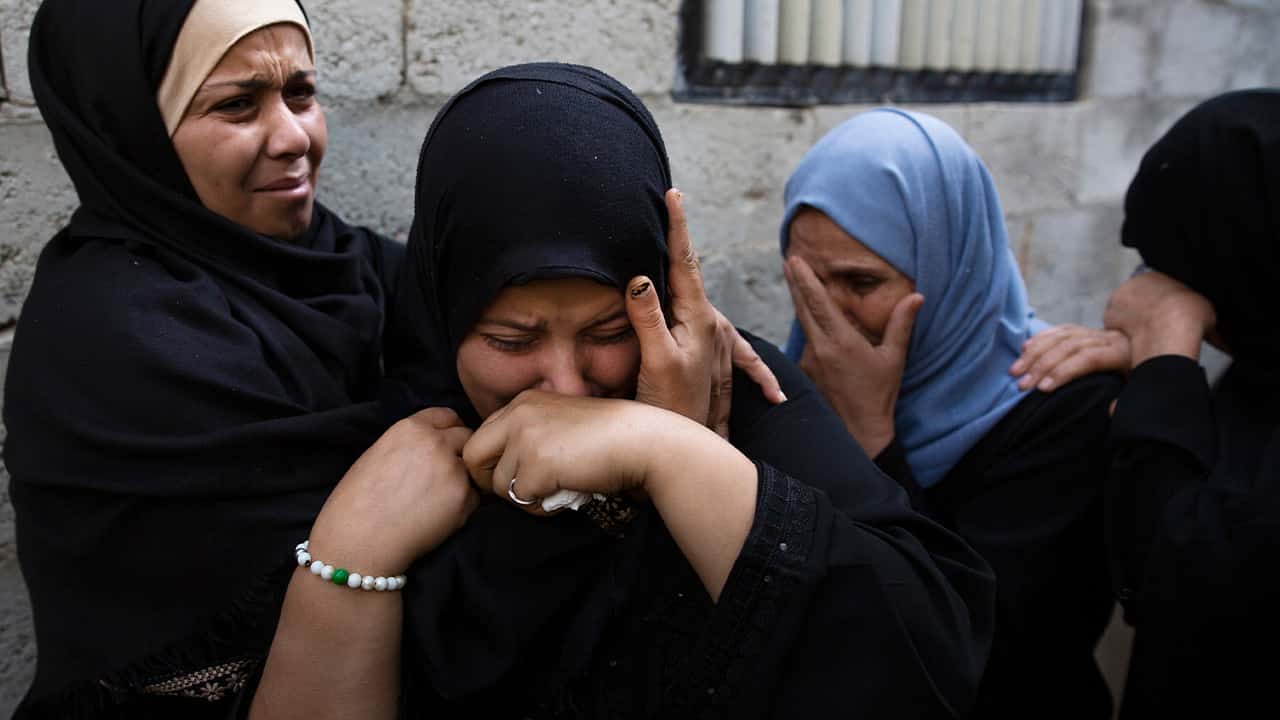 GAZA CITY, Gaza Strip — Israeli airstrikes pounded Islamic Jihad targets in Gaza on Wednesday and militants resumed rocket fire toward Israel after a brief overnight lull, as the death toll rose to 23 Palestinians, including a 7-year-old boy and two other minors, in the heaviest round of fighting in months.
The military said more than 250 rockets were fired at Israeli communities since the violence erupted following an Israeli airstrike that killed a senior Islamic Jihad commander. With the strike, Israel stepped up its battle against Iran and its proxies across the region.
The latest fighting brought life in much of Israel to a standstill. Schools were closed in Israeli communities near the Gaza border and restrictions on public gatherings continued as rockets rained down. Air raid sirens continued to wail throughout the day.
In Gaza, schools and public institutions also were closed for a second day and there were few cars were on the streets, with people mostly staying indoors.
The fighting was triggered early Tuesday by Israel’s targeted killing of Bahaa Abu el-Atta and his wife as they were sleeping. Rocket fire from Gaza reached as far north as Tel Aviv, with two people wounded by shrapnel.

Prime Minister Benjamin Netanyahu told a special Cabinet meeting that Israel has no interest in sparking a wider confrontation but warned the Iranian-backed Islamic Jihad that Israel will keep pounding them until the rockets stop.

“They know we will continue to strike them without mercy,” Netanyahu said. “They have one choice: either stop these attacks or absorb more and more blows.”


“They know we will continue to strike them without mercy. They have one choice: either stop these attacks or absorb more and more blows.” — Prime Minister Benjamin Netanyahu
Gaza’s Hamas rulers have yet to enter the fray — a possible sign the current violence could be brief. Although larger and more powerful than Islamic Jihad, Hamas is also more pragmatic. With Gaza’s economy in tatters, it appears to have little desire for more fighting with Israel.
But Hamas could be drawn in if the clashes drag on for an extended period or the Palestinian death toll rises significantly.
Palestinian officials reported 23 dead from Israeli airstrikes, including at least 13 militants. Five civilians, including boys ages 17, 16 and 7, were among the dead, while the identities of the other people killed were not immediately known.
Lt. Col. Jonathan Conricus, an Israeli military spokesman, said the army was trying to limit its activities to Islamic Jihad military targets in hopes of keeping Hamas on the sidelines and preventing a serious escalation.
“However, it’s very clear that if there will be Israeli casualties, the situation would change drastically and we would be forced to respond in a different manner,” he said.
U.N. Mideast envoy Nickolay Mladenov said negotiators are “working to urgently de-escalate” the fighting. Israeli police sappers remove a rocket fired from the Gaza Strip in farmland near the Israel Gaza border, Wednesday, Nov. 13, 2019. Israeli military said more than 250 rockets have been fired at Israeli communities since the violence erupted following an Israeli airstrike that killed a senior Islamic Jihad commander. (AP Photo/Tsafrir Abayov)

No Israeli Deaths Have Been Caused by the Rockets Attacks

In a statement released in Cairo, where he was to meet President Abdel-Fattah el-Sissi as part of efforts to broker a cease-fire, Mladenov said he was “very concerned about the ongoing and serious escalation” of violence.
Egypt frequently mediates between Israel and Gaza militants. Islamic Jihad has rejected the efforts, with spokesman Musab al-Berim saying the group’s priority is to “respond to the crime and confront the Israeli aggression.”
The French Foreign Ministry urged restraint by both side, saying it deplores the escalation of tensions and condemns the rocket fire toward Israel.
Israel’s new defense minister, Naftali Bennett, said Israel wouldn’t hesitate to carry out additional targeted killings against those who threaten it. “Israeli security forces will hunt down every terrorist, until our children are secure and safe,” he said.
Netanyahu appointed him to fortify his hard-line political base as he clings to office after two inconclusive elections. Bennett has long advocated tougher action against Palestinian militants but wasn’t part of the plans to strike Abu el-Atta.
No Israeli deaths have been caused by the rockets attacks, mostly thanks to Israel’s Iron Dome defense system, which the military said has had a 90% success rate when deployed.
A few homes suffered direct hits, though, and there was a near miss on a major highway, where a rocket crashed just after a vehicle had passed.

In Gaza, the Islamic Jihad said four militants were killed, including 38-year-old Khaled Faraj, a brigade commander. Four others were killed in an airstrike, including a father and two sons, and two others were targeted later. Their identities were unclear. Conricus, the military spokesman, said Abu el-Atta was in the final stages of planning a “combined attack” that was to include rockets, anti-tank missiles and a ground infiltration into Israel.
Netanyahu said the military operation was approved by the Cabinet 10 days in advance.
Still, some opposition figures suggested the timing could not be divorced from the political reality in Israel, where Netanyahu leads a caretaker government while his chief challenger, former military chief Benny Gantz, is trying to build a coalition government of his own.
Despite their rivalry, both men support a unity government, but each demands to be its leader.
Gantz said he’d been briefed on the airstrike in advance, calling it “the right decision.” Netanyahu updated his rival on developments later, according to his office.
A successful military operation could bolster Netanyahu as he seeks to hold onto power — especially if he is indicted on corruption charges.
Israel’s attorney general is to decide in the coming weeks whether to indict Netanyahu. An indictment would increase pressure on him to step aside. Netanyahu has sought to portray himself as one best capable of steering the country through its many security challenges.

Record Cold Follows Early Snowstorm Over Much of Eastern US