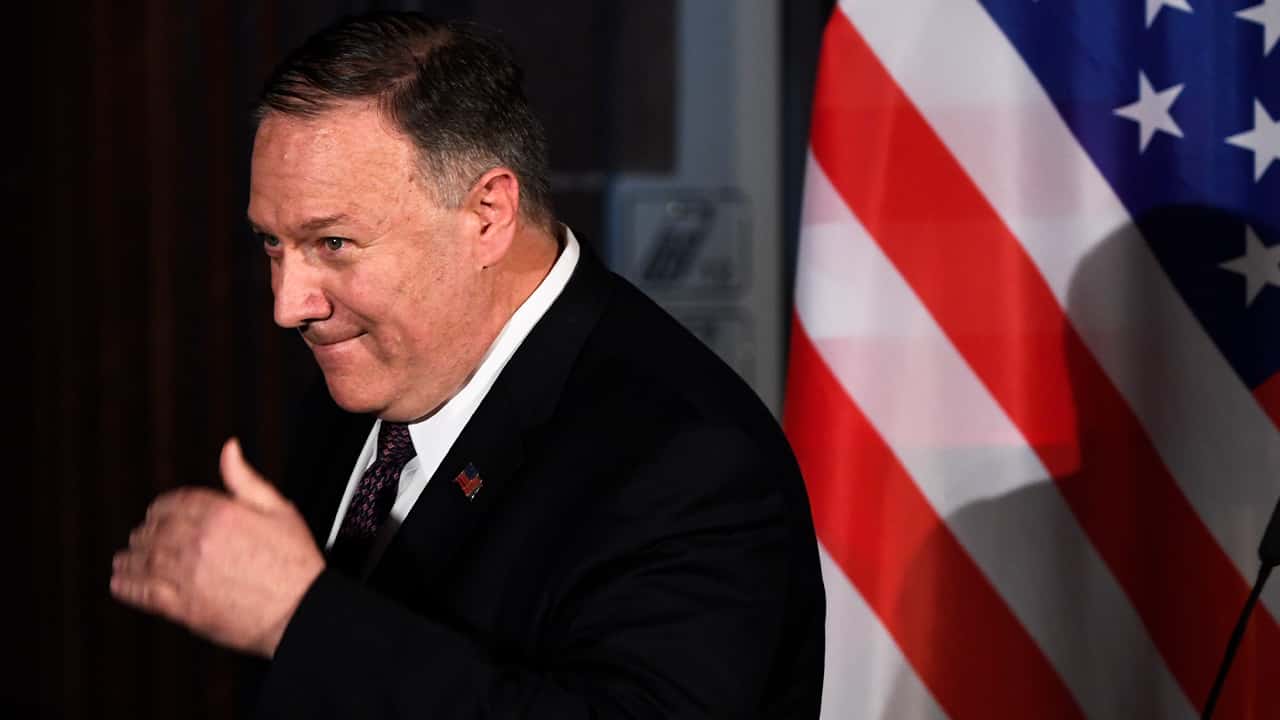 WASHINGTON — Secretary of State Mike Pompeo tries to shrug off the impeachment inquiry that has ensnared the State Department and raised questions about his leadership.


“I clearly follow this a lot less than you do.” — Secretary of State Mike Pompeo
Pompeo portrays the inquiry, which centers on President Donald Trump’s attempt to link U.S. military aid to Ukraine to a corruption probe of a political rival, as unworthy of his attention.
“I clearly follow this a lot less than you do,” Pompeo told reporters when asked about it the issue Thursday while on a visit to Germany.
But Pompeo may not be able to maintain that show of indifference much longer. Three senior diplomats are scheduled to testify in public before Congress next week, bringing renewed attention to his leadership as America’s top diplomat as the U.S. juggles several major foreign policy challenges and he weighs a possible run for the Senate from his home state of Kansas in 2020.
Despite damning accounts of unorthodox, improper or even possibly illegal behavior under the guise of diplomacy, Pompeo has struggled to remain above the fray. He has repeatedly rejected the process as “noise” and belittled those who ask him about it, calling their questions “insane” or “crazy.”
Pompeo, testily answering reporters in Germany, said that the bottom line was that nearly $400 million of aid that Ukraine needs to fight Russian-backed forces was cleared for delivery without the investigations that Trump wanted the Eastern European country to conduct into his rivals.

Pompeo Has Drawn Criticism for Not Doing More to Shield Diplomats

“That’s what happened in Washington with respect to Ukraine this year,” he said flatly.
The impeachment inquiry centers around an effort led by Trump’s personal lawyer, Rudy Giuliani, to use American diplomats to press the Ukrainian government into investigating the appointment of former Vice President Joe Biden’s son to the board of a gas company and a debunked conspiracy theory that people there interfered in the 2016 U.S. presidential election.
Pompeo has drawn criticism for not doing more to shield diplomats working under him from being used as political tools of the administration and for not speaking out when the president and his supporters denigrate career foreign service officers who have testified in the inquiry.
“Never in my experience and never in the modern period, post-1945, have you ever had a secretary of state more politicized, more constrained by his own political ambitions and his unwillingness to stand up to the president or defend his own department than Mike Pompeo,” said Aaron David Miller, a former State Department official who is now at the Carnegie Endowment for International Peace.
Pompeo may have been heartened this week when a group of his employees gave him a standing ovation at a public diplomacy workshop. But behind the scenes, officials say morale is plummeting at the State Department over the whole affair. FILE – In this Oct. 22, 2019, file photo, Secretary of State Mike Pompeo speaks at the Heritage Foundation’s annual President’s Club Meeting in Washington. The United States has told the United Nations it has begun the process of pulling out of the landmark 2015 Paris climate agreement. Pompeo said Monday that he submitted a formal notice to the United Nations. (AP Photo/Patrick Semansky, File)

‘Pompeo’s Audience Is Sitting in 1600 Pennsylvania’

There are even fears that reaction to Pompeo’s handling of the matter could result in a major wave of senior-level retirements and resignations that could decimate the Foreign Service with a loss of experience and expertise for years to come, according to officials familiar with the matter.

The Transcripts Have Also Made Clear That Pompeo Resisted Multiple Appeals

Pompeo has said the impeachment process is unfair to State employees because they are not allowed to have department lawyers with them when they testify. He has said this this opens them up to possibly revealing information that is classified or covered by executive privilege.
Yet, from the transcripts it is clear that the diplomats are more concerned with unfair treatment from the White House and Pompeo and his staff than from the investigators.
Former ambassador to Ukraine Marie Yovanovitch and former top Pompeo adviser Michael McKinley testified that they were upset about “bullying” of career officials at the hands of politically appointed State Department staff.
The transcripts have also made clear that Pompeo resisted multiple appeals to issue statements in support of Yovanovitch after she was ousted from her post under political pressure.
In testimony released on Monday, McKinley said he resigned when Pompeo refused to come to the defense of Yovanovitch after details of Trump’s negative comments about her to Ukraine’s president became public.
In testimony also released on Monday, Yovanovitch told investigators that the campaign against her, which included an article that was retweeted by Donald Trump Jr., undermined her ability to serve as a “credible” ambassador and she wanted Pompeo to issue a statement defending her. But no statement was issued.

Bloodhound Aims to Be World's Fastest Car in South Africa