LONDON — Britain’s three major national political parties wooed weary voters on Tuesday, all promising an end to Brexit wrangling if they win next month’s national election — but offering starkly different visions of how to achieve that.

Prime Minister Boris Johnson says if his Conservative Party wins the Dec. 12 poll, he will get Parliament to ratify his divorce deal with the European Union and Britain will leave the bloc by Jan. 31.

The main opposition Labour Party says it will take a bit longer — six months — to end more than three years of uncertainty triggered by voters’ decision in 2016 to leave the 28-nation EU after more than four decades of membership.

Left-of-center Labour says if it wins, within six months it will negotiate a new Brexit divorce deal that keeps close relations between Britain and the EU, then hold a national referendum on whether to leave on those terms or remain in the bloc.

Labour leader Jeremy Corbyn hasn’t said which side he would support in such a referendum. Johnson urged him in an open letter Monday to “come clean and explain what your plan really is.”

Corbyn insisted Tuesday that “Labour’s plan for Brexit is clear and simple” and said he was right to try to appeal both to the 52% of voters who opted to leave the EU in 2016 and the 48% who wanted to remain.

“Anybody seeking to become prime minister must talk to and listen to the whole country. Labour stands not just for the 52% or the 48%, but for the 99%.” — Labour leader Jeremy Corbyn

“Anybody seeking to become prime minister must talk to and listen to the whole country,” Corbyn told Labour supporters in Harlow, a town northeast of London that voted in 2016 to leave the EU. “Labour stands not just for the 52% or the 48%, but for the 99%.”

Corbyn said “the Brexit crisis needs to be resolved but it must be done democratically.”

Meanwhile, the centrist, pro-EU Liberal Democrats are trying to lure voters away from the bigger parties with a promise to scrap Brexit altogether. They said Tuesday that ending the economic uncertainty around Brexit would boost the economy and allow the government to put another 50 billion pounds ($64 billion) — what they call a “remain bonus” — into public services.

The party currently has just 20 of the 650 seats in Parliament, but leader Jo Swinson said Tuesday that this election “is a moment for seismic change.” 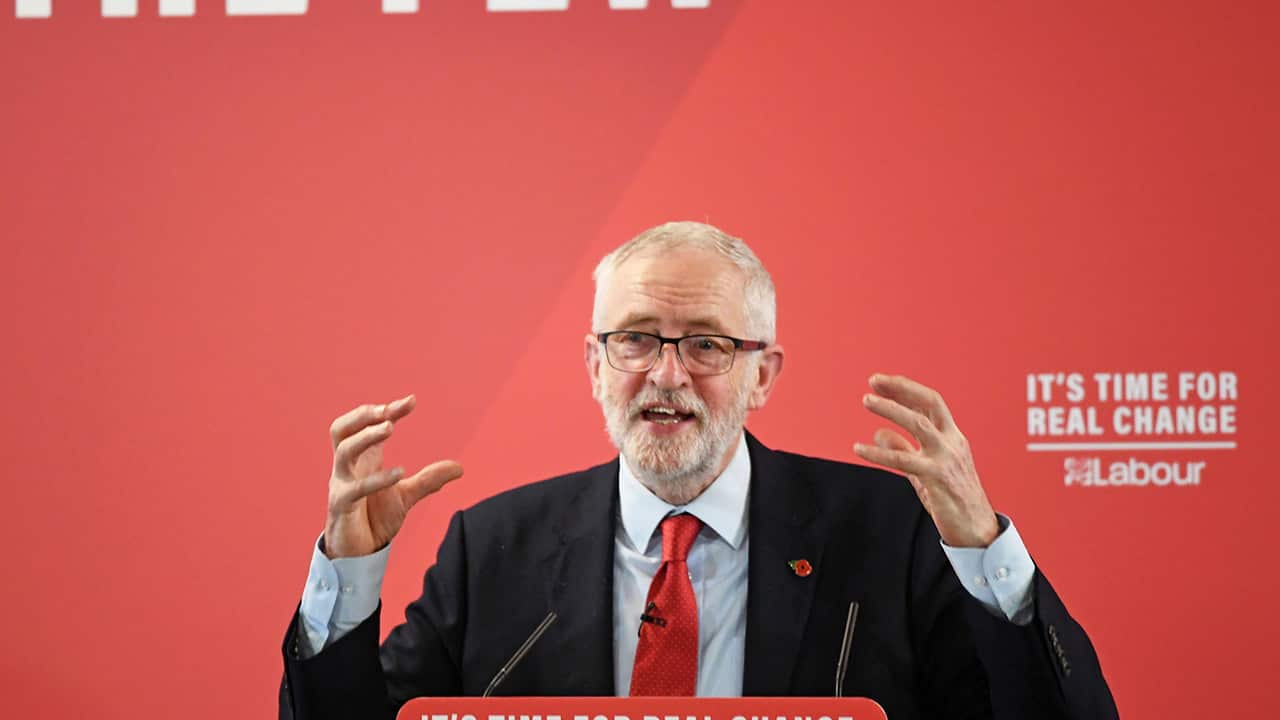 Some 46 Million People Are Eligible to Vote in Britain’s Dec. 12 Election

“This is not a normal election,” she told supporters in London. “It’s not a typical choice about whether you want the red team or the blue team (Labour or the Conservatives) to be in government for a few more years. . Because on this issue they merge into one.”

“This is not a normal election. It’s not a typical choice about whether you want the red team or the blue team (Labour or the Conservatives) to be in government for a few more years. . Because on this issue they merge into one.” — leader Jo Swinson

On the other side of the U.K.’s divide over Europe, the newly formed Brexit Party led by Nigel Farage wants British voters to reject Johnson’s Brexit deal and leave the bloc without an agreement on future trade. It is seeking to woo Brexit-backing voters from both the Conservatives and Labour.

Some 46 million people are eligible to vote in Britain’s Dec. 12 election, with all 650 House of Commons seats up for grabs.

While voters may hope the election brings an end to Brexit uncertainty, they are likely to be disappointed. Britain faces more big decisions and looming deadlines.

Once the U.K. leaves the EU, it will have to negotiate a new trade deal with the bloc, its biggest trading partner.

Michel Barnier, the EU’s chief Brexit negotiator, said Tuesday that post-Brexit talks on a free trade deal with the U.K. might be as tough as the negotiations that have taken place over the past three years.

EU officials worry that Britain will try to transform itself into a low-regulation economy that would undercut stringent EU social, environmental and workplace standards.

Corbyn made a similar claim, accusing the Conservatives of seeking “a race to the bottom in standards and protections.”

“They want to move us towards a more deregulated American model of how to run the economy,” he said.

Johnson’s Conservatives deny planning to lower standards, and say they are confident of finishing the negotiations by the end of 2020, when a transition period laid out in the proposed divorce agreement is due to end.

Cabinet minister Michael Gove said Tuesday that the transition period “absolutely” would not be extended.