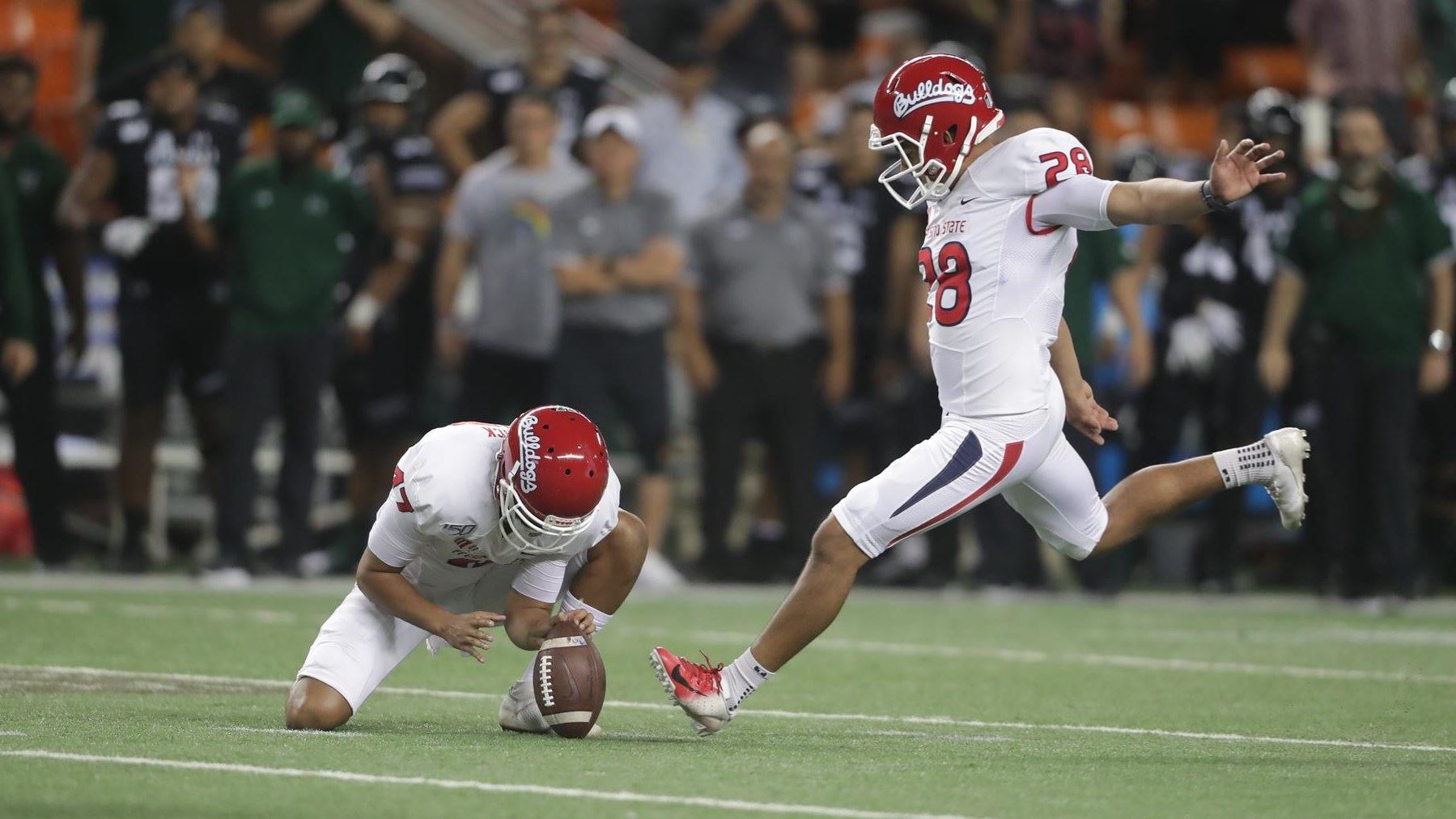 In a game filled with big plays, Cesar Silva’s pressure-packed 37-yard field goal proved to be the winning difference for Fresno State on Saturday night.

Listen to this article:
After Silva split the uprights as time expired, the visiting Bulldogs celebrated their 41-38 victory over Hawaii in a wild Mountain West football game.
It was the Bulldogs’ sixth-straight victory over the Rainbow Warriors on their home field. 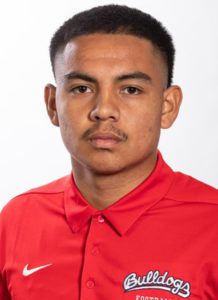 “I have been dreaming of this ever since I was a kid. It feels really good. As soon as I kicked it, I knew it was good.” — Bulldogs placekicker Cesar Silva

The victory also evened Fresno State’s record at 4-4 overall and 2-2 in the Mountain West heading into its home game this Saturday against Utah State, which is 4-4 overall and 3-1 in conference play. The Aggies have suffered two straight blowout losses — 31-7 at Air Force and 42-14 at home to Brigham Young.
“I have been dreaming of this ever since I was a kid. It feels really good. As soon as I kicked it, I knew it was good,” said Silva, a junior transfer from College of San Mateo. “The only thing on my mind was to make sure I took a good first step and attack the ball.”

Many Contributors for Bulldogs

In addition to Silva, there were several other heroes for the Bulldogs:
— Freshman Jalen Cropper recorded his second rushing touchdown of the season on a 53-yard scamper. Cropper has been a part of the three longest rushes for Fresno State this season (82, 79, and 53 yards). Cropper totaled 159 yards of offense (36, passing, 61 rushing, 62 receiving) and threw a touchdown pass to Zane Pope for the Bulldogs’ first touchdown.
On Monday, the Paul Hornung Award Honor Roll recognized Cropper to his all-around play. The  Hornung Award is presented by Texas Roadhouse at the end of the season to the most versatile player in college football.
— Ronnie Rivers posted back-to-back 100-yard rushing games for the first time in his career. He rushed for 146 yard against Colorado State and 104 against Hawai’i. He has run for two touchdowns in each of the last three games.
— Freshman Evan Williams, in his first career start, led the team at halftime with seven tackles and finished with nine. He also intercepted a pass from Hawaii quarterback Cole McDonald in the fourth quarter. On Monday, Williams was named the Mountain West Defensive Player of the Week.
— And quarterback Jorge Reyna rushed for a career-high 96 yards on 11 carries while completing 17 of 27 passes for 188 yards and a touchdown to tight end Jared Rice.
“We found a way to win. Down the stretch, it was nerve-wracking for sure,” said Bulldogs coach Jeff Tedford. “Hawai’i is a good football team and to be able to come back in the second half and win it at the end it big. I am really proud of Cesar [Silva] for getting it through the uprights.”

Chevan Cordeiro, who replaced starting quarterback McDonald midway through the fourth quarter, connected with Nick Mardner for a 50-yard gain and on the next play, Miles Rees scored on a 3-yard run to trim Hawaii’s deficit to 38-31 with 2 minutes, 13 seconds remaining.

“We found a way to win. Down the stretch, it was nerve-wracking for sure. … I am really proud of Cesar [Silva] for getting it through the uprights.” — Bulldogs coach Jeff Tedford
The Rainbow Warriors (5-4, 2-3) recovered the ensuing onside kick and Cordeiro’s 10-yard touchdown run tied it with 65 seconds to play. Reyna had a 17-yard run, hit Rice for gains of 5 and 9 yards and then ran for 11 yards to move the Bulldogs into Hawaii territory. After back-to-back incomplete passes, Rivers ripped off a 13-yard run to the 20 that set up Silva’s winning field goal.
“It is not a singular thing. This moment was about everybody,” Tedford said. “Those drives couldn’t have happened without the offensive line, without the receivers catching the ball, or without our defense making stops.
“What you see out there is a collection of everybody. If I go through something bad, everybody goes through something bad. We have to learn how to pick each other up. We did and we came out victorious.”

Saturday’s game with Utah State is Salute to Services Day. Kickoff is scheduled for 4 p.m. The CBS Sports Network will provide television coverage.