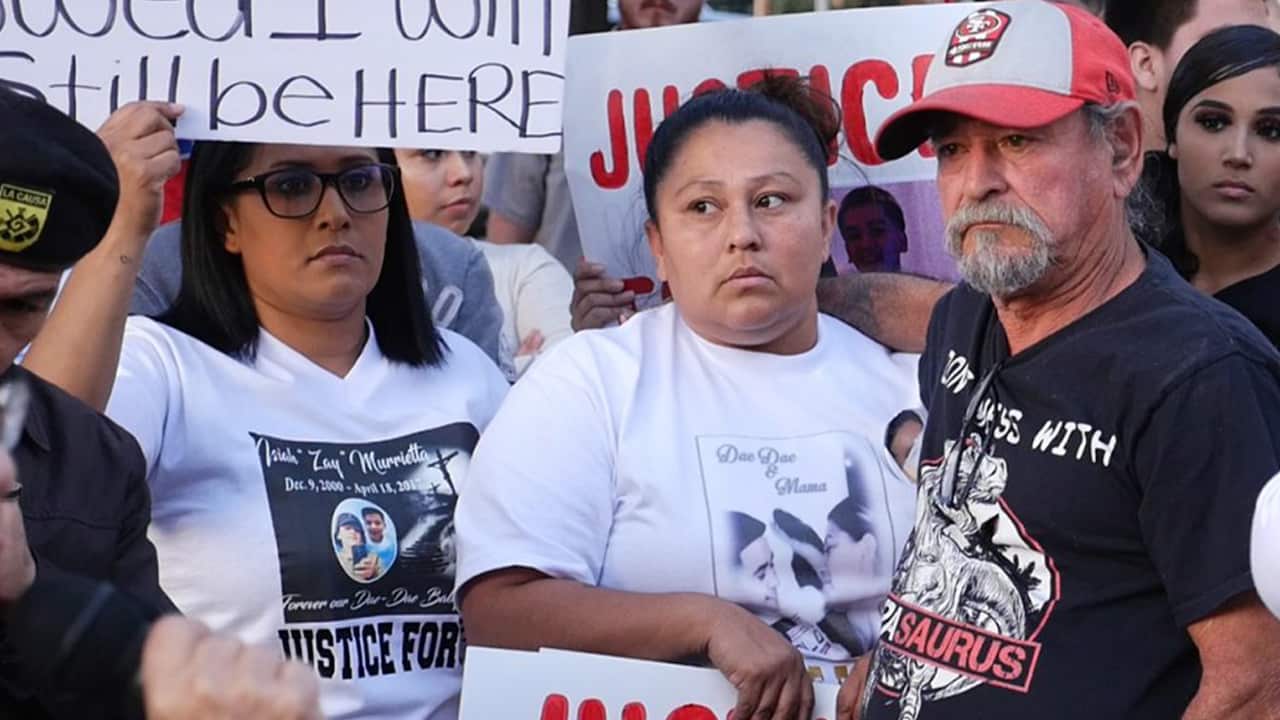 At times, Christina Pauline Lopez, overcome with the emotion of the moment, hid her face behind a sign depicting images of her son.
Lopez was among the protesters at the Robert Coyle Federal Courthouse in downtown Fresno on Monday night decrying the 2017 shooting death of her son Isiah Murrietta-Golding by Fresno police.

Listen to this article:
Video of the incident was only made public last week by attorneys representing Murrietta-Golding’s parents. Reaction to the video, showing a police sergeant shooting Murrietta-Golding from behind — eventually killing him — led to a strong reaction locally and nationally.
Around 100 people attended the event, organized by a group called Stolen Lives of Fresno. Many held “Justice for Isiah” signs showing pictures of Murrietta-Golding.
Amid of chants of “Enough is Enough,” and “Ya Basta!” the gathering not only protested the death of Murrietta-Golding but other shooting deaths by Fresno police.
Lopez has filed a wrongful death suit against the city. She did not speak during or after the demonstration. The boy’s father, Anthony Golding, filed a separate wrongful death suit. Both cases will be heard in federal court.

Gloria Hernandez, one of the group’s leaders, said that she presented U.S. Attorney McGregor Scott with a letter requesting an investigation of the Fresno Police Department for possible civil rights violations.
“We ask you to conduct a thorough, independent and transparent review of the officer’s questionable conduct, as well as a complete review of the policies and procedures of the Fresno Police Department,” Hernandez wrote. “We ask this investigation commence immediately. We are confident you will find this is not an isolated incident, but rather a pattern and practice of systemic abuse.”
The letter cited 92 officer-involved shootings since 1997.
Hernandez also called for the creation of an independent citizens review board over the police department.

Hernandez spoke about the need for changes in the police department and criticized the department’s former chief, Jerry Dyer.
Serving as chief from 2001 until last month, Dyer is running for mayor against Fresno County prosecutor Andrew Janz. Hernandez led “Vote Down Dyer” chants.
“He needs to get on his knees and pray,” Hernandez said.
Floyd Harris, Jr., a Fresno civil rights activist, announced his intention to run for mayor. He filed his paperwork last week and asked those in the crowd to sign his nomination papers.

Murrietta-Golding and his brother were suspects in the homicide of 19-year old Eugenio “Henie” Ybarra on April 14, 2017. According to the lawsuit, a bullet hit the car Ybarra was driving, causing it to crash, which led to his death.
The following day, Fresno police staked out the home of Murrietta-Golding. As he got into a car later in the day, police stopped the car at a shopping center at Shaw and Fresno streets. Murrietta-Golding fled the scene, running to a nearby daycare center.
The center was empty because it was a Saturday. Video shows Murrietta-Golding hopping the fence. One officer hopped the fence chasing him. Another fired a shot through the slats in the fence, striking down the 16-year old suspect with a shot to the back of the head. He was cuffed and transported to a hospital. He died three days later.
No gun was found at the scene.
The lawsuit claims that police did not provide Murrietta-Golding with medical assistance before an ambulance arrived 10 minutes later. The suit also says Murrietta-Golding did not provide a significant nor immediate threat, and that deadly force was unjustified.
Subsequent investigations by the department’s internal affairs unit, the city’s Office of Independent Review, and the Fresno County District Attorney’s Office found the police sergeant acted within policy.

Andrew Hall, the current police chief, has asked that the public not to rush to judgment based on the shooting video.
“The use of lethal force in this case occurred while officers were investigating a homicide. The 16-year-old in this case was involved in the homicide with his brother and the brother was later arrested and pled guilty,” Hall said in a news release last week.
The DA’s office didn’t confirm the disposition of the case because Murrieta-Golding’s brother also was a minor.
After the video’s release, national media, such as the New York Times and network news outlets focused on the case. It drew reaction from presidential candidates Julián Castro and Bernie Sanders.

We have to reform our policing system to end the “shoot first, ask questions later” mentality that ends far too many black & brown lives.

The fact that these officers weren’t held accountable is shameful—and more evidence that the system is broken.pic.twitter.com/p7x78KjFvL
— Julián Castro (@JulianCastro) October 25, 2019

The following is video of the shooting from the security camera of the daycare center, as provided by attorney Stuart Chandler.