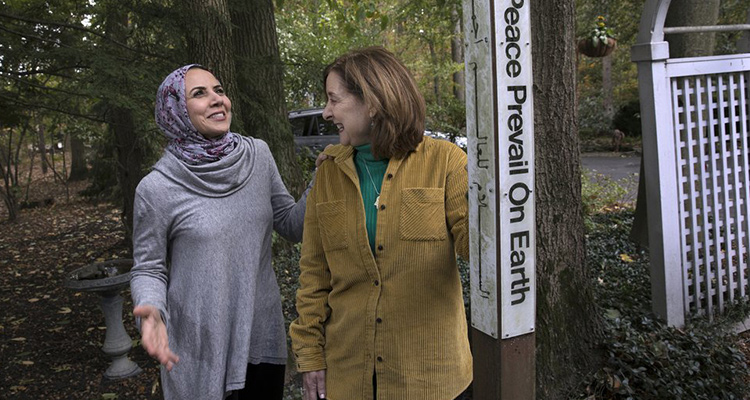 NEW YORK — Muslim groups helped raise hundreds of thousands of dollars to help Pittsburgh’s Tree of Life synagogue recover after a gunman killed 11 people there, one year ago this week. The Jewish congregation mounted its own fundraiser for New Zealand’s Muslims after a white supremacist shooter killed 51 people at two mosques there in March.

Such outreach between Jews and Muslims often draws widespread attention only in the immediate wake of tragedy. But as both faiths grapple with a rise in reported hate crimes and fears within their communities of being attacked for their beliefs, Jews and Muslims are forging bonds that rely on shared personal values to help combat anti-Semitism and Islamophobia.

For Sheryl Olitzky, 63, the “aha moment” that inspired her focus on Jewish-Muslim connections came almost a decade ago on a trip to Poland, when she asked a guide why she saw no locals in the head-covering garb of devout members of either faith.

Olitzky, who was married at Tree of Life synagogue, recalled being stunned by the exclusionary response she heard and telling herself that “I could not change history, but I could rewrite it by changing the future” and working to prevent further episodes of discrimination against Jews and Muslims.

When the grandmother of seven returned home to New Jersey, however, it took several months for her to realize that, despite living in an area with “a fairly substantial number of Muslims and Jews,” she had no Muslim friends.

The Sisterhood Devotes Much of Its Attention to Education

“I said, ‘I believe ignorance is a primary driver of hate, and it’s time, if I want to make change that I get to know Muslim women’,” Olitzky said.

When Olitzky was introduced to Atiya Aftab, a Muslim attorney and adjunct professor at Rutgers University, their partnership took off as the nonprofit Sisterhood of Salaam Shalom. What began as a meeting of six Muslim and six Jewish women at Atfab’s home now counts more than 170 chapters in 32 states and Canada, according to Olitzky.

“I said, ‘I believe ignorance is a primary driver of hate, and it’s time, if I want to make change that I get to know Muslim women.’” — Sheryl Olitzky

The Sisterhood devotes much of its attention to education and shared experiences that can deepen ties between its members, with its fourth annual trip this year taking dozens of Muslim and Jewish women and teenage girls to Germany and Poland. But a vow to fight hate crimes that target their respective communities is also woven into the group’s foundation, with a “rise and respond” primer for speaking out against anti-Semitism and Islamophobia released this year.

Other members of the two faiths have created formal alliances as well. The Muslim-Jewish Advisory Council was established by the American Jewish Committee and the Islamic Society of North America in the first days after President Donald Trump’s 2016 election — following a campaign where Trump repeatedly stoked public fears of Muslims.

MJAC is co-chaired by two business executives, one Jewish and one Muslim. The group opened regional affiliates after a 2017 spike in reported hate crimes that included the death of Heather Heyer, killed while demonstrating against a white supremacist rally in Charlottesville, Virginia.

AJC Director of U.S. Muslim-Jewish Relations Ari Gordon said that some themes common in episodes of anti-Semitism and Islamophobia are “definitely linked.” The same man who allegedly attacked a synagogue in Poway, Calif., this spring was also linked to a fire set at a nearby California mosque, Gordon pointed out.

Hate crimes reported to the FBI have risen for three years running, according to official statistics, with Jews and Muslims ranking as the top two targets of religiously motivated incidents. But underreporting is seen as a significant obstacle to effective tracking of the problem. Heyer’s death, for example, was not included in the federal database although the man who drove his car into the crowd where she stood pleaded guilty to hate crimes charges.

MJAC has championed bipartisan legislation in Congress designed to improve the tracking of hate crimes — but its work has stayed in that domestic policy lane, steering clear of U.S. policy toward the Israel-Palestine conflict that has been a longtime divider of Jews and Muslims.

“We don’t put that issue on the side because it’s not important; quite the opposite,” Gordon said, adding that MJAC aims to demonstrate that the two faiths “can work together for mutual benefit and build trust despite this disagreement.”

Wa’el Alzayat, CEO of the Muslim advocacy group Emgage Action, and Halie Soifer, executive director of the Jewish Democratic Council of America, took a similar approach when they co-authored a column after the New Zealand mosque attacks that described their faiths as battling the “common enemy” of white supremacist violence. The duo first got to know each other as colleagues on the staff of Samantha Power, who served as U.S. ambassador to the United Nations under former President Barack Obama.

“We can work together on issues that unite us, and that doesn’t mean we have to agree on every issue,” Soifer said. Alzayat, also a member of MJAC, agreed that the alignment to discuss their faiths’ struggles against hate crimes does not mean “you let go of your principles.”

AJC held an event last week to show support for the majority-Muslim Syrian Kurds as they grapple with the fallout from Trump’s decision to withdraw troops from the country’s northeast and Turkey’s subsequent attacks on Kurdish-held territory.

If the two communities can successfully find that “common ground,” Alzayat said, “over time, the really difficult stuff becomes easier to talk about.”

The partnerships between Muslim and Jewish groups have extended beyond battling hate crimes. AJC held an event last week to show support for the majority-Muslim Syrian Kurds as they grapple with the fallout from Trump’s decision to withdraw troops from the country’s northeast and Turkey’s subsequent attacks on Kurdish-held territory.

But even when it comes to the unifying issue of preventing hate crimes against their respective faiths, not every Muslim-Jewish partnership agrees on how publicly to discuss Trump’s role in the problem. Alzayat and Soifer used their op-ed to label Trump “a symbol of rising Islamophobia, anti-Semitism and other forms of racial and religious intolerance,” and Olitzky also said she views Trump’s muddled rhetoric about white nationalists as having “given permission for them to come out” further into the open.

MJAC, for its part, takes a more positive approach toward an administration whose support it needs to get further hate crimes legislation passed into law under Trump. The president signed a bipartisan bill strengthening penalties for threats against religiously affiliated institutions into law last fall. Gordon praised the Justice Department’s work on anti-Semitism and said that the group would not pull back on “criticism where we think it’s due.”

Skeleton May be Japanese American From Internment Camp